If Trump Gets His Way On Sanctuary Cities, NYC Will Have More Homelessness, Less Terror Protection

During his campaign, President-elect Donald Trump vowed to cut federal funding to so-called sanctuary cities, where local authorities have reduced the level of police cooperation with federal immigration agents. It's unclear how Trump intends to do this, and if his method would require congressional approval—given his apparent sub-Schoolhouse Rock level of understanding of the workings of government, it's possible he has no idea either—and any such proposal could face steep barriers in the courts. Nevertheless, New York City is a sanctuary city, and Mayor Bill de Blasio and others have vowed to fight any effort to change that.

A new cursory analysis by the Comptroller's Office shows that a federal shutout would have dire consequences for the city, particularly for programs serving the poor, children, people with HIV and AIDS, and for the NYPD's counterterrorism program. Again, a total shutoff of funding would face a lot of legislative and judicial hurdles, but the threat is certainly ominous.

As the comptroller's report states, about 9 percent of the city's $83.5 billion budget comes from federal sources. Those funds are heavily concentrated in supporting social-service programs, including Section 8 housing vouchers, which are entirely federally funded and are helping to keep over 39,000 households from homelessness, public assistance grants, which more than 600,000 New Yorkers are currently receiving, and the Administration for Children's Services, which is nearly half funded by federal aid.

Federal money also covers most of the Department of Health and Mental Hygiene's HIV/AIDS prevention program, and more than 60 percent of the NYPD's counterterrorism program.

In a statement, Comptroller Scott Stringer appealed to Trump's conscience, the existence of which we could not immediately verify.

"What we know with absolute certainty is that any cuts in federal aid to New York will have a devastating impact. We have a record homelessness crisis that will be made much more challenging with any decrease in funding," Stringer said. "I urge President-elect Trump to remember that behind every federal line item is a human face—a family in need, a victim of domestic violence, an AIDS patient, a hungry school child. We are a city that welcomes immigrants—we don’t turn people away based on where they’re from or what language they speak, and that must not change." 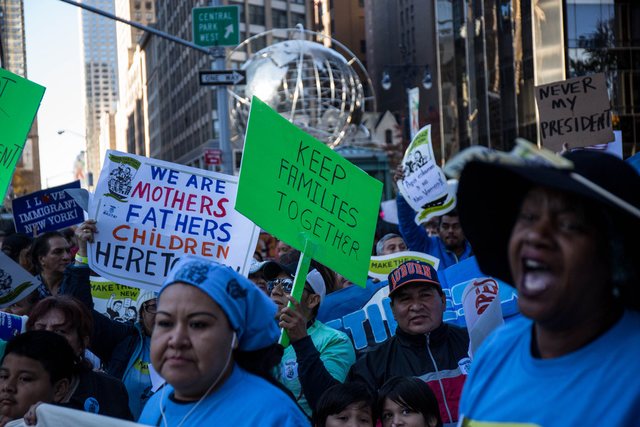 There are an estimated 500,000 undocumented immigrants in New York City, and the de Blasio administration has sought to firm up their status through initiatives such as the IDNYC program, which allows people to apply for identification cards without proof of citizenship. More than 800,000 New Yorkers have signed up for the IDs since they were created two years ago, and the legislation to create the program came with a destroy-in-case-of-a-tea-party-president clause to protect personal data that could be used by a hostile federal government to identify people for deportation. The city is required to review the data by the end of the year and determine what data to destroy.

"We're not going to tear families apart. So we will do everything we know how to do to resist that," de Blasio said following Trump's victory.

After initially striking an upbeat tone about Trump's rise to power, Governor Andrew Cuomo, too, vowed to resist in a lofty speech, saying, "If there is a move to deport immigrants then I say start with me. I am a son of immigrants."

About a third of New York City's undocumented population are young immigrants and parents of legal residents who are eligible, according to a recent report, for temporary reprieve from deportation under President Obama's Deferred Action for Childhood Arrivals policy, an executive order that Trump has said he will repeal upon taking office. Trump has also said he wants to create a deportation force to round up, imprison, and eventually deport anywhere from 2 to 11 million people. Many immigrants were reluctant to sign up for DACA protection for fear that the database of their information would be used to one day deport them, and given that there is no indication that Obama plans to erase the records, that fear now seems entirely justified.

Congressional moves to withhold federal funding to achieve policy goals are subject to strict tests under the Supreme Court decision in South Dakota v. Dole. Of course, thanks to Republican obstructionism over the last year, Donald Trump will take office with an open Supreme Court seat to fill. So far, Trump's administration picks seem to indicate that he views lack of experience, disdain for science and the future of humanity, overt racism, homophobia, and anti-Muslim bigotry, and belief in government as a vehicle to advance an apocalyptic vision of Christianity as job qualifications, so whoever he picks for judge is bound to be, uh, interesting.