If the Jets Play and No One Watches... 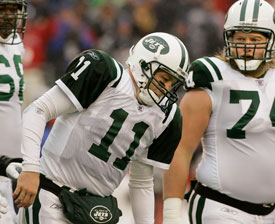 As admirable as the Jets' effort has been during the second half of their lousy season, don't count on it staying there the final two weeks. Sunday's game against the Titans will mean nothing to them -- though Tennessee needs to win it to have any shot at the playoffs -- and who knows if the Jets will be motivated after their grudge match with the Patriots last week. Their season right now is about watching young players like Darrelle Revis.

It's also about Kellen Clemens and the Jets' evaluation of the Oregon product. If he impresses in the next two weeks, they may be less inclined to draft a quarterback. But the Jets can't evaluate him if he isn't healthy enough to be on the field. If Clemens can't go, it will be Chad Pennington. Despite his decent play week, the Jets have seen that movie before. Jets fans have also seen the season-can't-end-soon-enough storyline plenty of times, so this won't be a shock.

#As
#chad pennington
#darrelle revis
#football
#jets
#Kellen Clemens
#oregon
#patriots
#sports
#Stephan Savoia
Do you know the scoop? Comment below or Send us a Tip