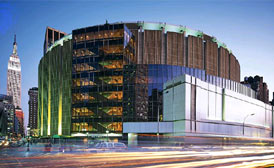 As the city and state start to get to work on West Side redevelopment, the Mayor said that one entity won't be getting tax breaks if it moves. Mayor Bloomberg was asked if Madison Square Garden would continue to get $10.9 million in tax breaks if it moves West to the Farley Post Office building (that's what a map in the draft Environmental Impact Statement notes). Bloomberg decisively said, "Not if I'm mayor they won't. Madison Square Garden isn't going to move, and there's no reason to justify that."

He also added, "I've always been opposed to bribing companies to come and to stay. MSG isn't going to move [out of Manhattan]." Wait a minute - isn't bribing companies to stay part of what makes the city tick? Granted, the Goldman Sachs incentive deal may have been engineered by former Governor Pataki, but the recent JP Morgan Chase deal was brokered by Bloomberg's and Governor Spitzer's teams.

Last month, the Daily News' Michael Daly pointed out that the most of the $11.6 million that a jury awarded former Knicks employee Anucha Browne Sanders, whose claims that MSG was a hostile work environment were believed by a jury, is covered by the tax breaks MSG gets from the city. Still, given that the Mayor's term ends in 2009 and a potential MSG move wouldn't be until after that, who knows what will happen.