If Madison Square Garden Moved Away... 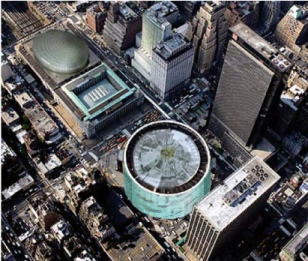 The fate of the Moynihan Station in the James Farley post office building remains up in the air and it's unclear whether Madison Square Garden will also relocate to the Farley building. If MSG moves, plans say the old MSG would be razed and a new train tracks would be put on top. The Municipal Arts Society's New Penn Station campaign shares a plan from students (at Columbia's Graduate School of Architecture's Historic Preservation Program) offering a different idea.

The students write, "We think the developers should adaptively reuse the arena structure, incorporating it into the new development."

- "Preserve MSG IV’s structure and cable roof for Moynihan East: The Paramount Theater inside the Arena may be removed since it is no longer a part of MSG’s future. This will bring light into Penn Station and provide an above grade presence."
- "To redeem the structure in the public’s eye, the arena floor may be removed and a garden can terrace down into the concourse giving commuters an urban oasis. We also envision a refacing of the MSG drum, playing with transparent and opaque glass."

You can read their report here. We're intrigued by the idea of repurposing the arena as a concourse; we just wonder if it would cost more or less than razing it (it would be the same footprint for retail development, which is probably why demolishing MSG is the proposed plan).

The MAS wants a "grand Moynihan Station" and worries that MSG moving west to the Farley Building, as well as other "big development" ideas, will compromise the Farley's building's beauty.