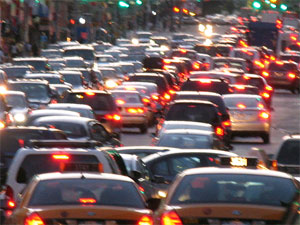 No one thought congestion pricing would be easy but now some of the economic reality is sinking in. The MTA announced that it would need $767 million to upgrade service if people shift from cars to mass transit.

How does that money break down? According to the NY Times, there's "$284 million in 2008 and 2009 for 367 new city and suburban buses, 46 new subway cars and many station renovations and service enhancements; $163 million for other subway and bus improvements from 2010 to 2012, and $320 million for two new bus terminals in Queens and Staten Island." The MTA expects $184 million from federal funds (the feds gave NYC about $350 million). The Sun mentioned some of the report's recommendations: "Adding service on the no. 1 line. It also calls for increasing C line trains to 10 cars from eight, adding or widening subway stairways at many stations, and implementing one rapid bus lane in each borough within two years."

The State's Department of Transportation also released a report that said traffic and delays would decrease if the congestion pricing plan were enacted, and suggested that $166 million in improvements might be needed. Assemblyman Richard Brodsky, an outspoken opponent of congestion pricing, slammed both plans, wondering where the additional funding would come from and said both reports were incomplete.

You can read the MTA's report here (PDF). Streetsblog reminds us the next milestone is "By December 31, 2007: The City or US DOT have to have committed at least $250 million or the deal is off."

Photograph of Canal Street traffic by dannyl on Flickr

#Assemblyman Richard Brodsky
#bus
#canal street
#city
#congestion
#department of transportation
#dot
#flickr
#mass transit
#money
#MTA
#News: NYC
#ny times
#nyc
#people
#photos
#queens
#staten island
#subway
#the city
#The MTA
#The State
#traffic
#transportation
#us
Do you know the scoop? Comment below or Send us a Tip
A new Gothamist is coming! We’ve moved comments over to our beta site. Click here to join the conversation and get a preview of our new website.