If Clinton Wins in 2008, Who Will Get Her Senate Seat? 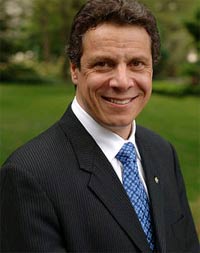 With Hillary Clinton focusing on her strong presidential campaign, NY State Democrats are wondering who will take over her place as the junior Senator from New York. Apparently Governor Spitzer may be open to putting Attorney General Andrew Cuomo on his shortlist.

The Sun explains that while Spitzer and Cuomo are not necessarily friendly (especially due to Troopergate), Spitzer might want Cuomo in another powerful political office so he can avoid facing off with him in the 2010 gubernatorial primary. Aw, the old "keep your friends close and your enemies closer" strategy!

However, there's a long list of people interested in being a Senator, including Representatives Nita Lowey, Jerrold Nadler, Carolyn Maloney and Gregory Meeks, plus Spitzer's lieutenant governor David Paterson. The Daily News reported that Nadler and Maloney have "personally lobbied for support for a Senate appointment" and that Spitzer may weigh loyalty to his administration during the Troopergate scandal heavily.

Lowey and Paterson, though, seem like strong contenders - Lowey has foreign policy experience, plus she was stopped her 2000 Senate ambitions when Clinton entered the picture; Paterson could break barriers at the first black Senator from NY. But there's no shortage of names: Apparently Robert Kennedy Jr.'s name is bandied about, too.