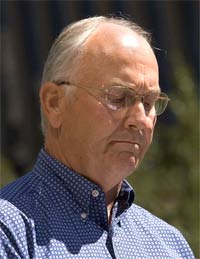 Senator Larry Craig, whose guilty plea to a disorderly conduct misdemeanor at a Minneapolis-St. Paul airport bathroom effectively tanked his political career, resigned this morning. Craig had been arrested after soliciting an undercover police officer for sex (read a transcript of his arrest interview here and listen to the interview here) earlier this summer. Today he said:

"What is best for Idaho has always been the focus of my efforts and it is no different today. To Idahoans I represent, to my staff, my Senate colleagues but most importantly to my wife and my family, I apologize for what I have caused. I am deeply sorry.

“I have little control over what people choose to believe but clearly my name is important to me. And my family is so very important also. Having said that, to pursue my legal options as I continue to serve Idaho would be an unwanted and unfair distraction of my job and for my Senate colleagues.”

You can read the entire text of his statement at the Idaho-Statesman.

Craig had held a mid-week press conference proclaiming his innocence and that his heterosexuality, but that did little to stop Republicans from criticizing him, stripping him of committee positions, and asking for his resignation. His fellow Idaho Senator Mike Crapo said in a statement, "Today is a sad day for me as I recognize that Senator Craig has made clear his intentions to leave the U.S. Senate. He has been my colleague for many years, and I have enjoyed working with Larry, but, more importantly, he has been my friend. It is my hope that as history judges Senator Craig, that his successes, accomplishments and strong leadership for Idaho in Congress are taken in totality."

Craig also said he would "fight...like hell" to have his guilty plea expunged, but CNN legal analyst Jeffrey Toobin believes that Craig's claim of entrapment may be hard to prove. Questions about Craig's sexual orientation have been around since 1982.

Newsweek has a debate between gay journalists Michaelangelo Signorile and Chris Crain about Craig's "outing": Here's an interesting take about the coverage of the Craig scandal by the Poynter Institute's Kelly McBride, who leads the journalism institute's ethics group.