Big ice chunks proliferating on the East River have been causing serious problems for the East River Ferry this month, which has suspended service more than once because of insurmountable ice conditions on the water. And according to commuter Lee Tone, the FDNY had to come break ice that was blocking in an East River Ferry boat near Pier 35 this morning.

"I got on at Greenpoint and the boat made 2 stops (North and South Williamsburg) before we pulled out to the West side of the East River," says Tone via email. "You could tell something was wrong because the guys on the boat kept running up and down the stairs to the captain's room. We were stuck near the Sanitation pier for about 15 minutes before an FDNY boat came out and broke the ice up so we could get out. We skipped the DUMBO stop and they told everyone that Pier 11 was the last stop and that service was suspended."

An FDNY spokesman says that despite having the department's motto painted on the back, that is not an FDNY boat. 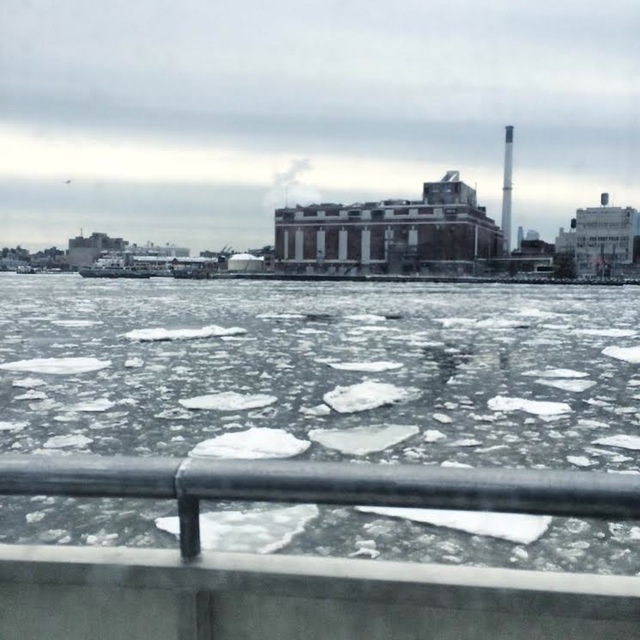 A view of ice from the ferry this morning. (Courtesy Lee Tone)

Gothamist food editor Nell Casey also tried to take the ferry this morning, and experienced similar troubles getting to DUMBO, about an hour before Tone's trip:

We got into trouble between South Williamsburg and DUMBO. The ferry was towards the East side of the river and the ice there was really chunky and thick. It was slow going and there'd be these bangs where large chunks of ice would hit the side of the boat. We sort of chugged along feebly for several minutes. Meanwhile, a later Downtown ferry blew past us in a lane of water without ice, arriving and departing Dumbo without incident.

The captain finally made his way into the clear channel and we limped towards the DUMBO dock, which was surrounded by ice chunks. For some reason he went past the dock, then sort of swung back around and tried to navigate into the Uptown dock, which may have been less icy. He sort of wiggled in and out of the dock for several minutes without being able to straighten out the boat. At one point, a crew member came through the seating area and told everyone to "Sit down immediately."

After a few awkward minutes, the captain gave up and took everyone to Pier 11, where we got on another, northbound ferry and landed at Dumbo without incident.

An East River Ferry spokesman says, "This is a NY Waterway ferry called The Bravest. It travels between Belford in Monmouth County and Pier 11 at Wall Street. It does not go further up the East River." According to its website, service from Pier 11 resumed at noon, though "some stops may be inaccessible." [SEE UPDATE BELOW.] Currently Greenpoint and Long Island City are inaccessible.

Here's an excerpt from an ice explainer on the East River ferry website:

The funny thing about the East River (technically not even a river, but an estuary) is that the tide changes multiple times per day, enabling ice to enter from different major bodies of water, making it nearly impossible to predict what it's going to do, or where it's going to be. In the winter, when it's so cold that there are large chunks of ice floating in the river, one minute N. Williamsburg could be totally socked in by ice and (literally) another 20 minutes later, DUMBO could be experiencing the same problems, but N. Williamsburg is OK.

Unfortunately, it's a situation that is determined in the moment, and is made by the vessel captain with two factors in mind: (1) Most importantly, the safety of our passengers. Can we safely dock the boat and let people on and off? and (2) Will we sustain any damage to the vessel?

Update: the mighty icebergs have spoken:

#east river
#East River Ferry
#ICE
#winter 2015
#original
Do you know the scoop? Comment below or Send us a Tip