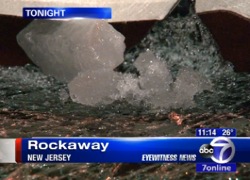 We've got more snow and cold weather, which means it can be treacherous out there, so please take a moment to ice off your vehicles—don't be the guy with chunks of ice flying off your roof into other drivers' windshields.

According to WABC 7, a woman in Mount Olive, NJ, suffered minor injuries last night "after a sheet of ice fell from a truck onto the car she was riding in with her husband." The ice reportedly "sailed through the couple's windshield," and, as you can see from the photos, it was a force to be reckoned with.

A tow truck driver who witnessed the incident was shocked by the size of the ice chunks, telling WABC 7, "It puts fear in people to drive on the highways in conditions like this when snow or ice is on the roof of trailers or trucks or car." Another tow truck driver said he towed a couple cars yesterday, "It's scary doing 70, 65 mph, and ice comes off and hits you, got to be startling." It's not an uncommon winter occurrence.

In NJ, if you don't clear snow and ice from the top of your car, you could be fined up to $1000 if there's damage to another car. In New York, there's no such law.