The Navy veteran who is accused of intentionally plowing his car onto Times Square pedestrians, killing one and injuring at least 20 others, said he was "trying to get help" during what the NY Post called a "weepy" jailhouse interview.

Richard Rojas 26, is being held without bail, as he faces murder and attempted murder charges. Authorities say that on May 18, around noon, he made a U-turn from Seventh Avenue at West 42nd Street and mounted the sidewalk, striking pedestrians for three blocks until a bollard stopped him. Surveillance footage shows the terrifying moments [warning: the footage is graphic and may disturbing to some viewers]:

A witness told Gothamist that he thought Rojas was driving at "past 100 MPH."

Alyssa Elsman, an 18-year-old tourist from Michigan, was killed and died at the scene; her 13-year-old sister Ava suffered a collapse lung, broken pelvis, broken leg and broken teeth. Their father Thomas Elsman said, "There's no words. I want to scream... My first born daughter is gone. My heart died in New York yesterday."

In the interview with the Post, Rojas said, "I was trying to get help. I wanted to fix my life. I wanted to get a job. Get a girlfriend." He claimed that he had recently spoken to a mental health counselor, who said that he'd be back in touch on Monday.

The unemployed vet had allegedly yelled at police, “You were supposed to shoot me! I wanted to kill them,” sources said. He later told cops he had laced the pot he smoked with PCP.

“I guess it was laced with something,” said Rojas, who claims not to recall any of the statements he made after he was arrested.

“The last thing I remember is driving in my car,” he recalled. “Then, I woke up in the precinct ... I was terrified.”

Mayor Bill de Blasio had said that Rojas' family told him Rojas suffered from "mental health issues going back to childhood that, like so many other such situations in our society, went unaddressed, even during the time he was in the U.S. military." 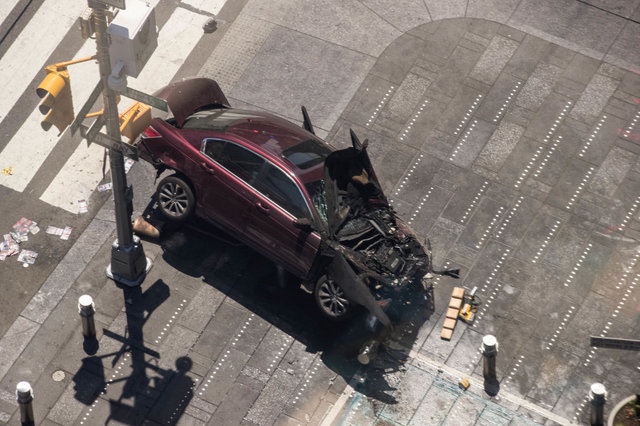 Other victims include a retired teacher from Park Slope, who has a broken leg and bleeding in the brain, and a high school senior from NJ, who was in NYC for senior skip day.

Thomas Elsman had told Fox 5, "If it was an accident I would forgive. The fact that I found out he was on drugs, and then also today in court said 'I wanted to kill everyone' and he wanted to go suicide-by-cop, that's intent. He knew what he was doing and I don't care what happens to him."