New Yorkers are crazy. Well, I suppose not all of them, but the kind of people who stand in line outside of stores for hours before the sun even rises certainly seem crazed. But New Yorkers do this for an endless variety things: Hybrid French/American pastries, David Chang Shack Burgers and even James Franco. Now you can add waiting for—if all the conspiracies work in her favor—the first female President of the United States.

I’m (not too) proud to say I’ve done two of these things—but at least the first time I got a delicious pastry. This time I just got to shake Hillary Clinton’s hand and watch her sign her new book Hard Choices, on sale today.

By the time I arrived in Union Square this morning at 8 a.m. the line stretched three blocks away from the main entrance to Barnes & Noble. I asked the security guard what he thought my odds of meeting Hillary were at that point. He said they were going to distribute 1,000 wristbands and that a month ago, May 14th, when James Franco signed copies of his book, people who started in the same position as me got in. I was relieved, though still disheveled, and still sweaty. 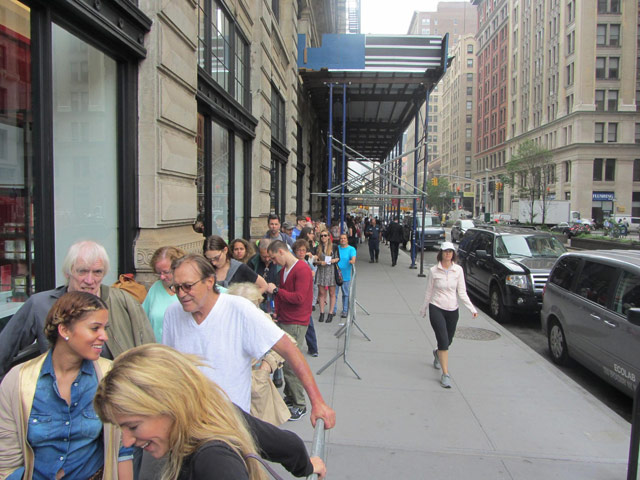 To my surprise the line started moving forward rather quickly. By 9 a.m. they had begun letting people into the building to purchase their wristbands and make their way up to the fourth floor, where they could wait the next three hours before Hillary's arrival. A little over an hour in, I was already a block and a half from where I started. This was probably around the time when the press, in their media pen, started to freak out about the list of rules Barnes and Noble staff had given them about the event.

There was an older woman four people ahead of me who came prepared with a collapsible stool. It was her second time waiting in line for a Hillary Clinton book signing at the Union Square Barnes and Noble; the last occasion was January 1996, when Hillary’s It Takes a Village: And Other Lessons Children Teach Us was published. She introduced herself as Charlene Loo, a Chinatown resident who immigrated to the United States from Taiwan in the late 1960s.

Loo thinks Hillary has a good chance of winning if she chooses to run for president. In fact, Loo thinks all women should aspire to the Oval Office. Asked who she thinks was a better first lady, Hillary or Michelle Obama, Loo simply exclaims, "Yay Women!" Later, she offered me a banana, which I gratefully accepted. 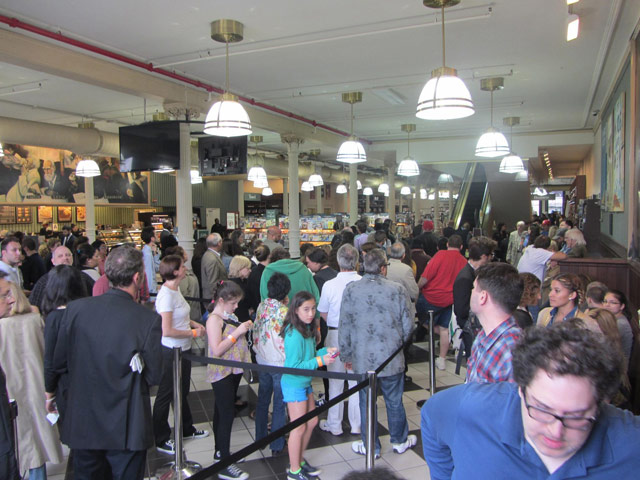 There’s a sense of accomplishment and pride, as well as humiliation, when you get to the end of a five-hour line. Because I had waited hours for the Cronut last summer I knew I could do this. And it's the people you get to know that help you persevere. I also met a man named Randall who had waited for Bill Clinton to sign My Life in 2004, as well as Mike Tyson to sign Undisputed Truth in 2013. He knew that he could do this, too, but not everybody did—some less patient Hillary-lovers left the line prematurely because they decided it wasn’t worth it, or because of frustration, or fatigue. But once you know that you have the stamina, patience, and bladder capacity to stand in a slow-moving line for five hours to make a purchase, it starts to seem less crazy. It becomes a point of pride. 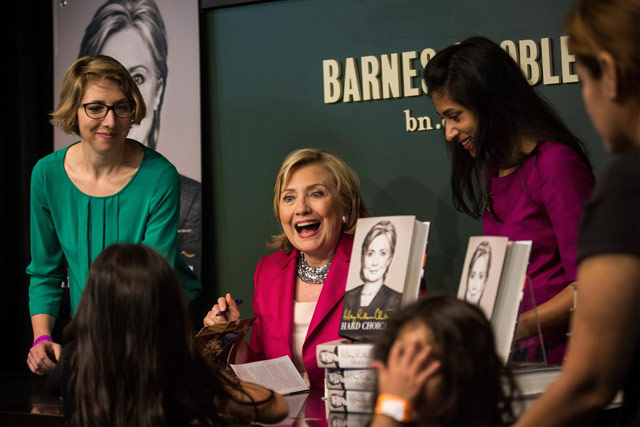 By 12:45, I was twenty feet away from Hillary, waiting behind a good 50 people lined in a zig-zag up to the stage. As time ran down I snapped pictures, made jokes about how unfair it was that Hillary could drink water while the sign clearly said "No Food or Drink On The Fourth Floor," and just generally felt my hands get clammier and clammier. At about ten minutes to 1 p.m. an 8-year-old girl with her father went up to the table to get a book and Hillary began talking to her. She gave the girl a good 30 second pep-talk about what it means to be a strong woman and the value of women in politics, or something—I couldn't hear, and to be honest I was annoyed the kid wasn’t being pushed along by security like the rest of us.

At 12:55 p.m. I shook Hillary Clinton’s hand, asked her how she was doing ("Fine") and was handed a book that she wrote "Hillary" in. I rode down the escalator, said goodbye to my brave line-waiting brothers and sisters and finally escaped Barnes & Noble.

Of course, for some people, this is a profession. I met the man who operates an eBay profile selling collectibles. He runs all over the city for these types of things and actually turns a pretty impressive profit from online sales, but not this morning. His original plan was to pair the signed copy of Hard Choices with his signed copy of Hillary’s previous book Living History, but when word spread that Hillary was only signing her first name, he was severely disappointed. The professional, who declined to give his name, said the fact that she wasn't signing "Rodham Clinton" downgrades the online value at least 20%, explaining that "it’s not truly a signature anymore, she’s simply just writing her name." 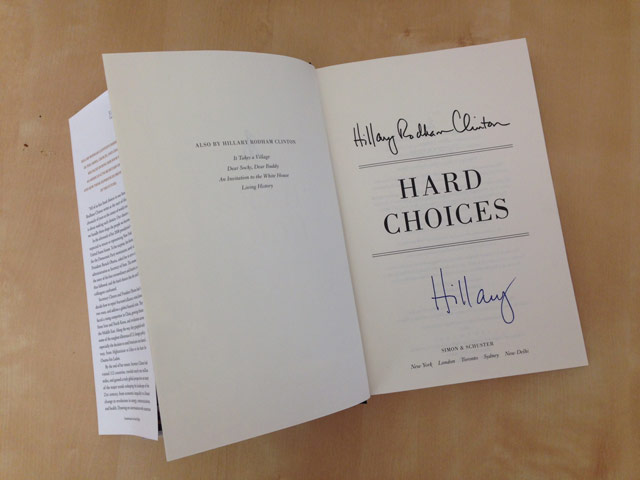