The 191st Street subway station is not the Ritz-Carlton, but most nights, there is soft jazz playing in one of the elevators.

"This is Clifford Brown, I’m just getting into him,” Lisa Clark, an elevator attendant, told me one night after queuing up a Pandora jazz station on her phone. “I also like John Coltrane, of course. And Miles Davis.”

She also likes Janet Jackson. And Big Boi. And Public Enemy. But on the job, she sticks to jazz, setting a nice mood for the 35-second, 18-story elevator ride she takes over and over and over again, between 10 p.m. and 6 a.m., five nights a week.

Earlier this month, I tagged along with Clark for an entire eight-hour shift, to see firsthand what it’s like doing one of the MTA’s oldest, and exceedingly rare, jobs. Attendants now work in only five stations, all of which are in Upper Manhattan, where the tracks are deeper below street level. The 191st Street station is the deepest of them all, at 180 feet. 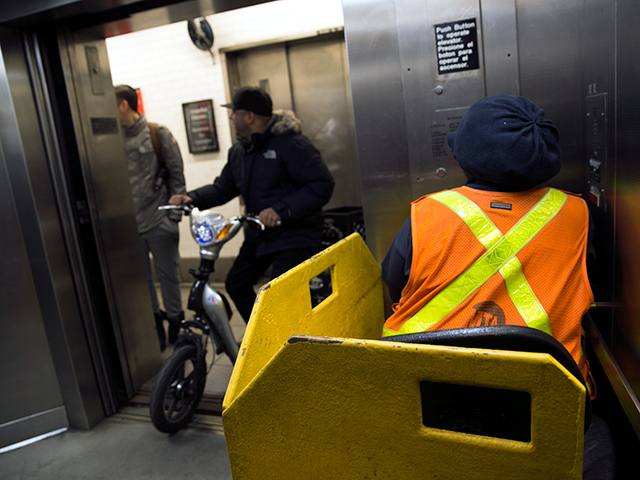 At 180 feet, the drop from St. Nicholas Avenue down to the station is the deepest in the entire subway system. (Clarissa Sosin for Gothamist/WNYC)

Besides the soundtrack, the first thing I noticed after a few trips up and down was the air quality in the elevator. Clark warned me right away about the smoke that wafts in from outside the station’s entrance on St. Nicholas Avenue.

“I never smelled weed like that until I came here,” Clark said. “And it gives you some kind of contact high. I had a headache yesterday.”

It is intense, especially when you add cigarette smoke, and the lurching motion of the elevator. About an hour into the shift, I started feeling nauseous. Then it got disorienting in other ways.

Once the elevator started moving, I really had to focus to tell which direction it was going. The doors open into almost identical elevator banks, and I kept losing track of whether we were up at street level or down in the station. A steady stream of people came and went until about 1 a.m., after which we’d go 15 or 20 minutes riding up and down in an empty car.

At around 2 a.m., an MTA employee, whose job involves going around to different stations to check on elevator attendants, brought Clark a cup of coffee and stayed to chat, mostly about cooking shows.

Clark only left her seat once, at 5:30 a.m., to use the bathroom. She didn’t eat a bite of anything, or take a sip of water, the whole shift. By my math, we took about 750 one-way trips together. Then, at 6 a.m., she got out of the elevator, boarded the subway, and went home. She seemed to be in a good mood. 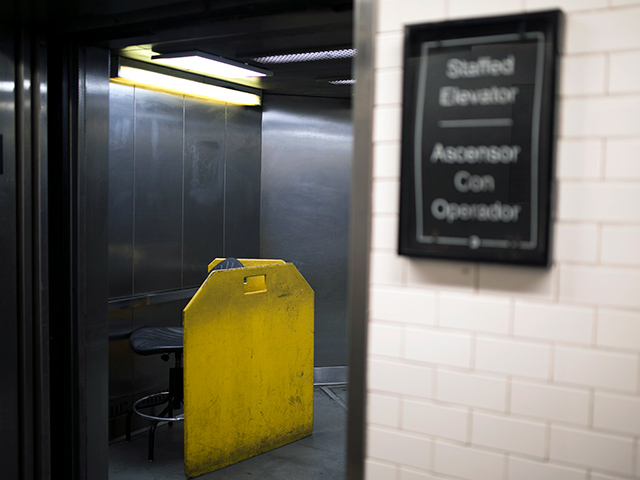 Last fall, the transportation workers’ union saved the elevator attendant position from being cut entirely, by convincing the MTA that the remaining attendants were crucial for making riders feel safe.

But attendants are not security guards. They do not carry weapons and will not intervene in an altercation. Clark told me that she cannot even carry mace.

“Anybody can come in here and rob us,” Clark told me, adding that she mostly refrains from striking up conversations with strangers out of a concern for her own safety. (According to the MTA, 675 assaults and 22 thefts were perpetrated against MTA employees at the five uptown stations that have elevator attendants between 2016 and March of 2019. Regarding attendants specifically, no thefts were recorded).

“Sometimes people are off their meds,” she said. “[A guy] came and threatened me. It was really scary, and I could sense something was wrong. You could see it in his face, like the devil. But then he came back and apologized the next day! He was so nice. I just couldn’t believe that.”

In fact, everyone who works as an elevator attendant is technically a station cleaner, or CTA, working on restrictive duty for medical reasons.

Clark, who’s been working for the MTA for 21 years, said she became an elevator attendant a year-and-a-half ago after developing arthritis. Of the roughly 30 employees currently working as elevator attendants, many are doing the job temporarily, while dealing with an injury.

“If [the MTA] would’ve cut those jobs, they would’ve put them in restricted duty jobs throughout the system,” said Damon Shelley, TWU Local 100’s officer for station worker safety. “But other than the elevator job, there are no other jobs in the system where you wouldn’t have to do something straining physically.”

MTA employees are eligible for 60 percent of their pay if they’re out on disability after 26 weeks. With a restricted duty job, though, you can keep working without having to eat into that time.

“It’s good for the public, but it’s also good for people working through physical ailments,” Shelley said. “It gives them time to get better — and lets them provide for their family.”

Though attendants are not guards, riders still say they provide a sense of security. In previous attempts to cut these jobs, residents of Washington Heights and other surrounding neighborhoods organized to demand that they stay, saying the presence of attendants was “essential for their safety.”

“In the last couple years, there’s been a little bit of a spike in the general discomfort,” Elizabeth Lorris Ritter, a longtime Inwood resident who had previously organized to save attendant jobs, told me. “There’s more open drug use. The opioid epidemic has taken its toll. You see more needles.”

She said people are better behaved when someone is watching, even if they have no intention of intervening. Ellen Langer, a Harvard psychology professor, agrees.

Clark also noted that attendants are crucial when an elevator stalls out.

“Just recently, an elevator got stuck between the top and the bottom, and a frantic young lady with claustrophobia was on board,” Shelley, the union officer, told me. “The attendant was able to comfort her, possibly preventing a panic attack. The fire department had to come, and both the elevator attendant, and the passenger, had to be evacuated through a hatch.”

A few days after my night with Clark, I returned to 191st Street station and spoke with another attendant, who asked to remain anonymous because he wasn’t authorized to speak on the record. He told me that it is a risk for elderly riders to go into a locked elevator alone, pointing out that he recently called 911 to help an older man who collapsed from a diabetic attack.

“Anywhere there’s an MTA employee presence, it’s safer,” he said. “What’s going to happen when everything’s automated and there’s no one here?”

#subway
#Washington Heights
#we the commuters
Do you know the scoop? Comment below or Send us a Tip
A new Gothamist is coming! We’ve moved comments over to our beta site. Click here to join the conversation and get a preview of our new website.