"I Don't Care What They Do In Paris, I Live In New York City," And Other Quotes From Last Night's Citi Bike Meeting

Tensions were high in the auditorium of P.S. 41 in Greenwich Village last night, where hundreds of SoHo and Village residents gathered to kvetch about and, alternatively, defend Citi Bike and its arrival in New York. Anti-Citi Bikers bickered with supporters, and some refused to mingle with anyone but their own.

"Are you for Citi Bike or against it?" SoHo resident Ronnie Wolf asked me, pointing to the open seat to my right. "I don't want to sit next to anybody who's for it."

The forum itself, though, was generally civil, with speakers given two minutes (later, 1.5 minutes) to share their opinions. Interestingly, few residents opposed the actual concept of Citi Bike so much as where DOT had opted to place the racks. Herewith is a sampling of the statements made: 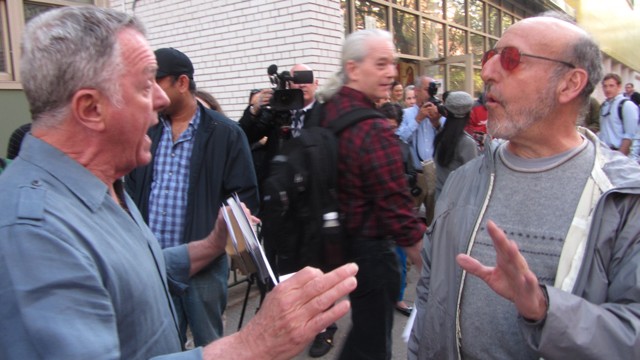 Only one person we spoke with—Jeff Prant, a Park Slope resident—opposed Citi Bike outright. He held a sign that read "Bike Share But Not in My Parking Space."

"When I drive into the Village it's going to be harder to park. I would rather not have them at all," he said. "It takes parking spots away from people like me. I just don't like it."

But perhaps the most telling line of the evening came before the meeting even began. "Can't we all just get along?" one Citi Bike supporter asked another. She shook her head. "We wouldn't be in New York."

#bike share
#citi bike
#greenwich village
#soho
Do you know the scoop? Comment below or Send us a Tip