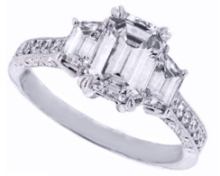 It's the umpteenth story about an engagement gone sour and hardly the first one that has the would-be groom demanding the pricey engagement ring back. But it's the first that we can recall where the ex-fiancee is the granddaughter of a Gambino crime family head!

Dean Kuehnen and Andria Castellano got engaged in December of 2006. Kuehnen gave her a 3.23 carat emerald-cut ring with 160 additional diamonds in the platinum setting. But then they broke up, and Kuehnen really wants the ring, or the $38,800 it's valued at, back, as he filed a lawsuit against Castellano in Manhattan Supreme Court.

The Post calls Kuehnen either "very brave or very dumb" because Castellano's maternal grandfather, Paul Castellano, was the head of a the Gambino crime family until he was "gunned down outside the Sparks Steak House in Midtown in 1985, paving the way for John Gotti to seize control of the Gambino family."

Etiquette experts generally believe that if the woman breaks the engagement, she should return the ring, and if the man breaks it off, he shouldn't expect it back. However, a New York Law School professor told the Daily News, "As long as it was given as a true engagement gift, he has a very good chance of getting it back." Interesting - and that's probably why some people recommend that women should ask for an engagement ring on a holiday or their birthday, so it's more than an engagement gift, and why men are advised to give the ring on a day that's not special!

Of course, this case is not as cut and dry as the one of a woman who got to keep her engagement ring after she dumped a guy who was still "pursuing other relationships" online - and he was still married, too.