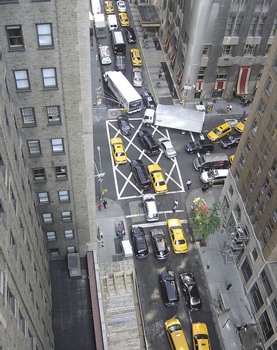 There's no session scheduled for the State Assembly Monday in Albany, but state senate leader Joseph Bruno took a break from barking back and forth with Governor Spitzer to draft a bill in an effort to lay claim to a half-billion dollars in federal funds targeted at improving transit. Senate Majority leader Bruno had the bill drafted and urged fellow lawmakers to convene in an effort to get the state's hands on $500 million in federal funds that New York is competing for, against other cities like Denver, Miami and Seattle.

Bruno's bill authorizes setting up a committee that would investigate exactly how to implement congestion pricing, while setting certain deadlines for action that would ensure New York could claim federal largesse. The state senate majority leader, whose recent relations with the Governor have been strained to say the least, is urging Spitzer to have Assembly leader Sheldon Silver convene the legislature Monday in time to enact the congestion pricing proposal bill.

The legislation creates a 12 member commission, with equal representation by the Assembly, Senate, Executive and Mayor, to make recommendations regarding the use of any revenues generated by the congestion pricing fees; the impact of the traffic mitigation plan on
neighborhoods outside the congestion pricing zone, including plans to address the need for additional parking and creating a residential parking permit program; and the mechanism for enforcement of the plan.

No word on what participatory role New York State would extend to New Jersey, whose Governor has already expressed ambivalence regarding the plan. Governor Corzine doubts congestion pricing would be feasible because New Jersey's mass transit cannot expand its capacity quickly enough to meet increased demand. Maybe New York State wants to kick some federal cash in the Garden State's direction? Whatever happens, it's nice to read a news article when Bruno and Spitzer aren't dropping "f-bombs" or referring to each other scatalogically.