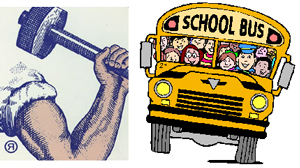 A bus full of students from Hunter College High School was pursued by a hammer-wielding road rager yesterday afternoon in Queens. It's unclear what made the driver so irate, but bus driver Jose Bautista noticed a man driving crazily in his rear view mirror and pulled over to the left. That is when the angry driver got out of his car and kicked in one of the panes of glass on the school bus's front door, then began hammering the vehicle.

Bautista is not allowed to carry a cell phone while working, so he contacted his dispatcher, Tom Guida, on the radio, who told him to get back on the road and move the 30 kids he was transporting to safety. The bus driver told ABC's Eyewitness News that the encounter with the hammer-swinging man was not over even after he got back on the road. "He started driving with one hand and hitting the bus with the hammer [out the driver's side window]."

Dispatcher Tom Guida was unimpressed with how a 911 operator handled his call. He said that she refused to listen to his account of a hammer-wielding maniac attacking a bus full of children because he wasn't the bus driver. No police were sent to intervene. Fortunately, the incident ended with no one hurt. Guida did file a police report after the fact, including the license plate number of the angry driver, which one of the Hunter kids recorded during the incident.