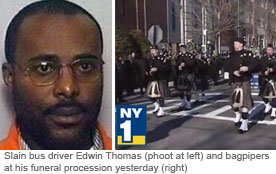 Yesterday, bus drivers, MTA executives and friends joined the family of Edwin Thomas at his funeral. Thomas was killed last week while driving a B46 bus when an angry passenger stabbed him. The Transport Workers Union vowed to propose legislation for safer buses and NYC Transit president Howard Roberts said, "The legacy of Edwin Thomas will be a more secure and safe environment for bus drivers in this city."

NY1 reports that the "dramatic sendoff" included bagpipers, an out-of-service bus and a salute from the bus operators, who lined the streets of Queens, when the hearse carrying Thomas' casket passed them. The Post has video.

MTA chief executive and executive director Elliot Sander gave Thomas' family a plaque commending his dedication and courage; according to CityRoom, a "replica of the plaque will be permanently erected in the Flatbush Depot," where Thomas was based. Sander said, "He worked some of the most challenging bus routes. He earned the respect of all of his colleagues. Edwin Thomas made the ultimate sacrifice in the line of duty.”

Thomas's suspected killer, an ex-con, is in police custody.

#b46
#bus driver
#bus driver killing
#edwin thomas
#funeral
#stabbing
Do you know the scoop? Comment below or Send us a Tip