One day after a cyclist was fatally struck by an SUV driver near Barclays Center in Brooklyn, hundreds of safe streets advocates gathered for a vigil at the north end of Union Square, and pledged to stop referring to traffic collisions as "accidents."

Many of last night's attendees wore bright-yellow Families for Safe Streets t-shirts on which "accident" had been scribbled out with thick lines, and replaced with the word "CRASH." More than 23,500 single-stem yellow carnations, piled at the base of a podium and distributed throughout the crowd, represented the 23,463 New Yorkers who have been injured, and 123 who have been killed, in traffic collisions this year to date.

Amy Cohen, a founding member of Families for Safe Streets, was the first to address the crowd. Her son, 12-year-old Sammy Cohen-Eckstein, was killed by the driver of a mini-van outside of his Park Slope home in October 2013, while chased a soccer ball into the street. Just last week, the driver received a 6-month license suspension.

"The word 'accident' suggests something unavoidable and inevitable," she said. "When we refuse to say accident, we are insisting that something can be done to save lives."

Three-year-old Allison Liao was killed by an SUV driver while crossing the street in Flushing with her grandmother, in a designated crosswalk. "Our daughter was not killed in an accident," said her mother, Amy Tam. "She was killed by a driver who did not give the road his full attention. Her death was the result of a dangerous, predictable, aggressive driving culture."

Judy Kottick, the mother of 23-year-old Ella Bandes—who was fatally struck by a B52 bus driver in Bushwick in February 2013—prefers the term "traffic violence." She reasoned, "Like gun violence, people cause it, and people can stop it."

Between statements from collision survivors and family members of traffic victims, city and state politicians read off the names of those who have died in traffic in the first half of 2015, by month. Some names were accompanied by descriptors (Wesley Manning, age 27: son, golf instructor; Dylan Ramirez, age 16: son, older brother), while more than a dozen others were simply "unidentified." As each name was read, everyone in the crowd tapped his or her chest twice, over the heart. 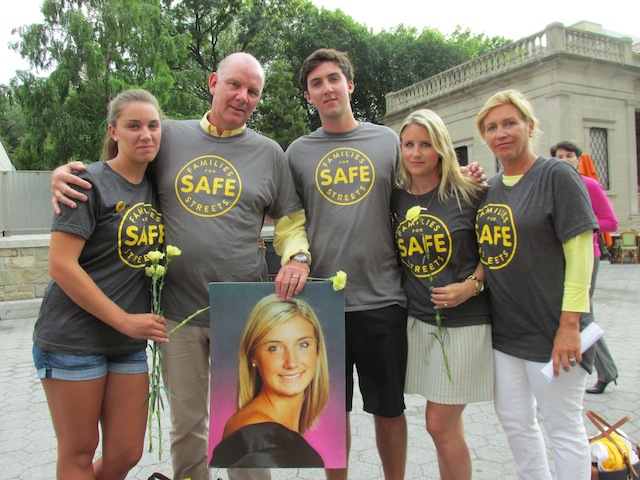 The Gordon family, with a picture of 22-year-old Kelly, who was killed by a taxi driver on the Upper East Side last year (Emma Whitford / Gothamist)

Last August, the Right of Way Law gave the NYPD the power to charge reckless drivers who kill or injure pedestrians. Until then, drivers had to be intoxicated or break numerous laws to face anything more serious than a temporary license suspension. And in October, the City Council voted to lower the city's default speed limit from 30 mph to 25 mph. Both laws are part of Mayor de Blasio's ambitious Vision Zero plan—announced last year, it aims to eliminate all traffic deaths in the city by 2024.

But many attendees expressed frustration with the NYPD's lax enforcement. Ali Gordon's 22-year-old sister Kelly was killed by a taxi driver on the Upper East Side last April. She stood with her family last night, hoisting a large photograph of her sister, in which Kelly is looking over her shoulder and smiling. "It's an absurd number of deaths, and it's growing," she said. "They lowered the speed limit, but it's not lowering the numbers yet."

Howard Jeffries of Gramercy Park attended the vigil in honor of his friend 80-year-old Ruby Baum, who was killed by the driver of a Toyota Sienna while hailing a cab on the Upper East Side in September 2012. Jeffries called the new speed limit law a "bunch of crap."

"It means absolutely nothing," he said. "Because nobody's going 25 mph now, and nobody was going 30 mph to begin with."

Dulcie Canton, 37, was struck by the driver of a Chevy Camero on August 7th of last year, while biking past the intersection of Bleaker Street and Wilson Avenue in Bushwick. "I heard the car rev up," she told us. "Next thing I knew I felt impact, and I woke up in the street. I had pain in my shoulder and ankle, and a concussion. This guy was going 40 or 50 miles per hour."

No charges were brought against the driver. "My friend sees his car every day," Canton said. "I'm scared to go to that neighborhood." Canton was struck three weeks before the Right-of-Way Law passed, but she's not confident that the law would have made a difference. "The law was a great idea," she said. "The only issue with that, is that it needs to be enforced."

In January, four months after Right-of-Way went into effect, pedestrian and cyclist advocacy group Transportation Alternatives pointed out that of 10,000 moving violations documented by the NYPD since its passage, only 12 of them—less than 1%—had resulted in pressed charges. 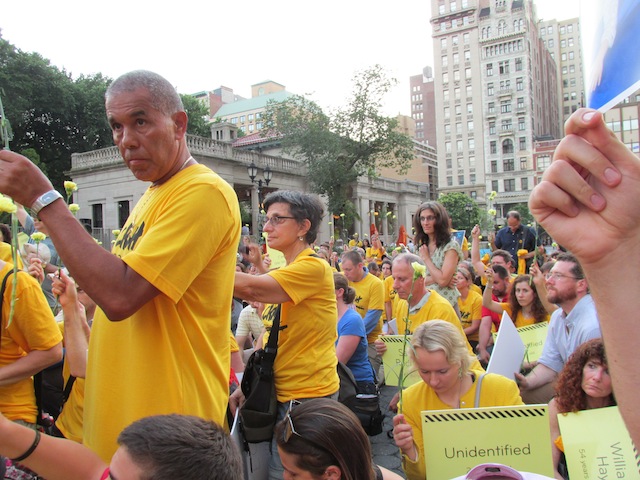 Last night's vigil concluded with a moment of silence for the man who had been killed by an SUV driver the previous day. Described simply as "Unidentified Cyclist," he was the tenth New Yorker to be killed in traffic since July 1st. Families for Safe Streets member Aaron Charlop-Powers urged everyone in the crowd to bend down on one knee, and raise their carnations in the air.

"We offer this as a way to honor his life," said Charlop-Powers, whose 57-year-old mother Megan Charlop was killed in 2010, while biking in the Bronx. "And to acknowledge the pain and trauma our city suffers each time this happens." As of today, the SUV driver has not been charged.

#Crash Not Accident
#families for safe streets
#vision zero
#original
Do you know the scoop? Comment below or Send us a Tip