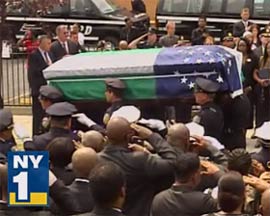 Yesterday, mourners attended the funeral of the pregnant traffic agent fatally struck in the Bronx and the baby son she never knew. Donnette Sanz and Sean Michael Justin Sanz were buried together in the same casket; she had died on August while her son was born but only lived a week until last Friday. Wdower Rafael Sanz "broke down" when he was given the flag from the coffin.

Mayor Bloomberg and Commissioner Ray Kelly attended the funeral service. Bloomberg gave a moving speech, noting, "First and foremost, Donnette gave the gift of life, to her husband, Rafael, to whom she donated a kidney and to her son, Sean Michael, who was born into this world against all odds." He also referenced how strangers came together to move a bus that had pinned 7-months pregnant mother-to-be, "Sean Michael tapped into the heroism of dozens of normal, ordinary New Yorkers who, within seconds of a tragic accident, came together to perform an extraordinary rescue."

Sanz, a Jamaican immigrnat, was also remembered as a model traffic agent, who never lost her cool. Kelly said, "She would answer their questions, correct their mistakes and help them succeed in a very challenging job," pointing out traffic agents "interact with individuals who are often rushed, angry and reluctant to cooperate.”

The mother and son were buried in Mount Kisco. The unlicensed driver of the van that struck Sanz was charged with criminally negligent homicide; he has not entered a plea yet.