252 protesters were arrested yesterday during the daylong Occupy Wall Street demonstrations, an NYPD spokesman tells us. Five protesters were charged with felony assault, and there were at least a dozen reported injuries sustained by police and protesters. One officer policing Zuccotti Park in the afternoon was struck in the eye by an "unknown object," while another got a "nasty, nasty" cut to his left thumb after an unidentified person threw a "star-shaped glass object" at him, according to the Wall Street Journal. Mayor Bloomberg visited the officer at Bellevue, and then held a press conference to chastise the demonstrators. 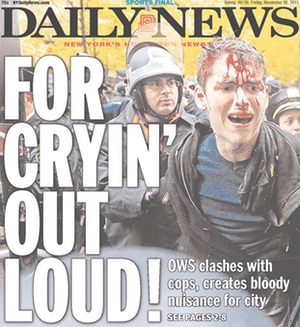 "Unfortunately, some protesters today have deliberately pursued violence," Bloomberg told reporters, and chided Occupy Wall Street for falling short of its ambitious goals yesterday. "Occupy Wall Street had predicted on their website that tens of thousands would be participating in today's protests, but there have been far fewer—and so far they have caused what can accurately be described as minimal disruptions to our city." But by the end of the day, the crowd that gathered in Foley Square for a march over the Brooklyn Bridge was by all accounts massive.

It's difficult to say how many protesters were injured throughout the day, but one volunteer medic tells the Journal that some protesters suffered concussions after falling back and hitting their heads, and at least two protesters had been taken to a hospital. "The procedure for arresting is knock over and drag away on the back," says the medic. "I just rinsed blood off the street so no one would freak out."

The bloodiest arrest that caught the media's attention was Brandon Watts, a 20-year-old man whose been at Zuccotti Park since week one. As we reported yesterday, Watts allegedly knocked a police officer's hat off and was chased down by cops inside the park. The Daily News—which put his bloody face on the cover today—reports that he also tossed objects (including a AAA battery) at cops. Police say he resisted arrest and hurt his head on the concrete during the scuffle.

One protester, however, said the police "beat the shit" out of Watts, who was charged with attempted assault and grand larceny. It's difficult to verify how exactly he got that nasty gash on his head from this chaotic video, but if you want to give it the Zapruder treatment, here you go:

Watts, as it happens, is a bit of a minor celebrity at Zuccotti Park. He's been arrested four times so far, and you may recall him bragging to the Times about his sexploits at the encampment, telling the Sunday Magazine section, "I drank six Four Lokos with Core, a beer or two. And then we ordered an iced mocha and two chicken fingers and large fries. I lost my virginity today. I was amped for it." Watts was also the first protester to defy the no-tent rule and set up a tent in the park. “A [police] captain told him to take it down,” the protester tells the News. “[Watts] said, ‘No.’ He faced the cops down. After that, tents started popping up everywhere. That kid was a fighter."

Several protesters say they were roughed up by police when officers seized a rental truck delivering tents headed to an Occupy Wall Street storage space inside the United Federation of Teachers, Police “started hitting people,” protester JoAnna Mitchell tells the Journal. “I got hit in the leg.” And around 6 p.m., approximately 60 protesters, including Councilman Jumaane D. Williams, were arrested for blocking a roadway leading onto the Brooklyn Bridge in Manhattan. George Gresham, president of 1199/S.E.I.U., United Healthcare Workers East, and Mary Kay Henry, the president of the nationwide Service Employees International Union, were also arrested, the Times reports.

But it wasn't all nightsticks and barricades—the Post (which got a priceless photo of a lady in high heels wiggling through a police barricade) reports that a protester marching with a cowbell got some friendly encouragement from an NYPD officer. "More cowbell!" the cop yelled. Well isn't that special?