On a good day, crossing the Brooklyn Bridge on foot or two wheels is a harrowing ballet of tourist-dodging and angry cyclist fist-shaking. On Saturday, the bridge that usually sees 10,000 pedestrians and 5,000 cyclists a day was so crowded it had to be closed.

Brooklynite Julian Rosow set out for a run over the bridge at around 12:45 p.m. At the halfway point, he says he hit "a human traffic jam."

"Once we realized we were all stuck, we couldn't turn back," Rosow told Gothamist. "There were too many people." The police officers stationed near the center of the bridge? "They said they couldn't really assist with the situation because it was the first time it had happened."

Rosow said that a young girl was crying in the crowd, and appeared injured. "She went to the police, they helped her, but if someone has a medial emergency it would be really hard to access them if there are that many people on the bridge."

It took Rosow 90 minutes to get to Manhattan. By that time, police had shut off access to the pedestrian path, though it was reopened a short time later.

A year ago, the DOT released a report on the possibility of widening the promenade on top of the Brooklyn Bridge—from 2008 to 2015, pedestrian traffic on weekends increased by 275%, cycling traffic by 104%.

An engineering firm hired by the DOT said that expanding the promenade was possible, but that the cables on the bridge had to be inspected first to ensure they could handle the additional weight.

"NYC DOT is actively investigating the feasibility of expanding the Brooklyn Bridge Walkway," a DOT spokesperson wrote to Gothamist in an email. "This work will include an inspection and weight capacity analysis of the bridge’s main cable, which is expected to commence in 2019." 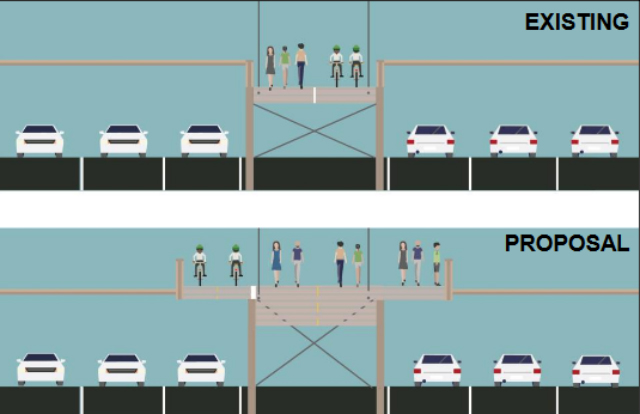 While some have called for the DOT to replace one of the three vehicular lanes in each direction with a bike lane, DOT Commissioner Polly Trottenberg told reporters last year that doing so would create "pretty extraordinary traffic back-ups that made their way through the whole network of downtown Brooklyn," and that it would be hard to make a bike lane that made cyclists feel safe.

Rosow says the DOT should follow The Met's lead.

"I think they should start charging tourists for the bridge, something small, like $2," Rosow says. "It's just so old, and with over-tourism in New York City, it's not fair: tourists get to use it so much, the locals, we don't have the ability to use it anymore."

#brooklyn bridge
#dot
#pedestrian safety
#tourism
Do you know the scoop? Comment below or Send us a Tip