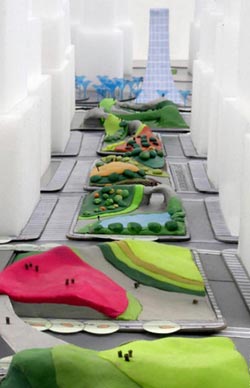 Mayor Bloomberg's not about to let a little economic turbulence down on Wall Street ruin his ambitious plans (paid for with $3 billion in bonds) for a business district at the west side Hudson Yards site.

Today the Hudson Yards Development Corp., which is overseeing construction of the project and the recently scaled-back extension of the No. 7 subway line, has released five possible designs for four acres of park space, the Post reports. Five architecture firms are competing for the job, which calls for a wide park stretching down the middle of a boulevard from 33rd to 42nd Streets, between 10th and 11th Avenues.

The park is intended to be an urban oasis to compliment the potential 24 million square feet of office space and 13,500 new units of housing. The winning design will be selected in early October, and construction of the first phase of the project, from 33rd to 36th streets, is supposed to be finished in 2013, at the same time as the 7 train extension to 11th Avenue and 34th Street.

The designs will be on view to the public at the Center for Architecture on La Guardia Place from September 25th through the end of October; on Thursday representatives from each of the five firms will be on hand to present their proposals. But clearly Work Architecture's Play-Doh Fun Park, seen here, is the one to beat.