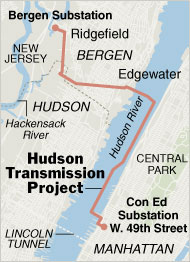 Two companies are vying to be chosen to lay an electricity transmission cable from New Jersey to Manhattan and ultimately, both may wind up doing the job to feed the city's need for juice. The deadline is 2010, when the Charles Poletti Power Project in Astoria, Queens is scheduled to shut down. According to The New York Times, the EPA has identified that plant as the third-largest source of toxic pollutants in the city. Two years ago, an energy company called Trans Gas was the high bidder on the West Side Railyard; it wanted to build a power plant there. New Yorkers have seemed to conclude that outsourcing their pollution is the best policy, so will pump in electricity from facilities in New Jersey.

Cross Hudson Corp. and Hudson Transmission Partners both have essentially the same plan of laying a cable from Bergen, NJ to the ConEd substation on West 49th St. That facility only has the ability to accept one source, however, and building the capacity for a second could push the total project's cost to a half-billion dollars. The city's not taking sides at this point and officials have called in federal regulators to do the dirty work of refereeing the race. Regardless of who gets to West 49th St. first, both cables will likely be needed. The plant in Astoria that is set for decommissioning currently supplies 885 megawatts of electricity to the city. Cross Hudson's bid to supply power from NJ only involves 500 megawatts.