How Would Bloomberg Measure Up as President 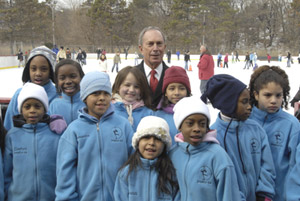 A lot is being made of Mayor Bloomberg leaving the Republican Party - Could it be a prelude for a run for the White House? Officially, Bloomberg is saying that he won't be running for President and that he is serving out his term as mayor. Our reader poll yesterday was pretty divided, one question that needs to be asked is how Bloomberg would measure up in height if he ran for, and became President.

Obviously there's more to being President than height alone, but when comparing Mayor Bloomberg's height to that of the previous United States Presidents, he's not all that tall. And the perception is that the taller candidate for President is the winner (not true). Bloomberg, who stands at 5'7" (though there are conflicting reports about his height) would be the shortest resident of the West Wing since William McKinley, who was 5'7". In fact, Bloomberg would be shorter than all but seven previous Presidents (Ulysses S. Grant, John Adams, John Quincy Adams, William McKinley, Benjamin Harrison, Martin Van Buren, James Madison).

And how would Bloomberg stack up against other world leaders if he were President? Bloomberg wouldn't be eye-to-eye with Angela Merkel (5'8"), Chancellor of Germany. He'd be shorter than Gordon Brown, who is 5'11" and the likely Prime Minister of the UK. Maybe he would fare better against some of the leaders in Eastern Asia (we couldn't find their heights).