How We Figured Out Gramercy Park Is A Bargain

Alongside this methodology, please read the full investigation.

More than 100 years ago, the Trustees of Gramercy Park defeated an attempt by New York City to tax the gated, 2-acre lot by showing that their properties were worth 30% more than their neighbors who didn’t have keys to the park, and would be taxed accordingly. But is that still true? Are the keyholders still paying higher property taxes to enjoy their private slice of paradise?

If only New York City property taxes were that simple. Under the current system, a single family home (Class 1) is treated very differently from a condo (Class 2) or an office building (Class 4). Different kinds of properties—classes 1, 2A, 2B and 2C—have different kinds of caps on how high the City can value them. Assessment percentages are used to determine how much of a property’s market value is taxable. But with the caps, many properties have assessed values that are much lower than their assessment percentages.

With all this in mind, and after speaking to several researchers and tax experts, we decided to divide the properties into tax classes (and sub-tax classes), and only compare properties within these groups: single-family homes, condos, co-ops and rentals.

After digging up the original 1909 court decision from the New York State Archives in Albany (a 1910 court decision then affirmed that ruling), we saw that the buildings they used were two blocks north of Gramercy Park and three blocks south, so we hewed closely to those blocks and lots when choosing our keyless properties. We also chose properties on the blocks that faced Stuyvesant Square Park, five blocks away from Gramercy Park, to see if there was any significant difference in how the city values and taxes buildings in the same neighborhood, some fronting a private park, others fronting a public park.

Property Tax Data
The New York City Department of Finance (DOF) provides the property tax rolls for fiscal years 2009-2019 as well as an archive of yearly property tax rates on its website. Detailed explanations of data fields can be found in the DOF’s data dictionary.

Geographical Data
We created maps of the Gramercy Park neighborhood by combining several shapefiles (a shapefile is a format for storing geometric location and attribute information of geographic features). The Department of City Planning (DCP) maintains a shapefile of the footprint outlines for every building in New York City, while the Department of Information Technology and Telecommunications (DoITT) has one showing a road-bed representation of NYC streets. These were combined in QGIS and trimmed down using the City’s shapefiles of borough boundaries and neighborhood tabulation areas.

Sales Data
We used the DOF’s annualized sales data to find detailed information about the sales of properties on the park. The data, separated by borough, extends as far back as 2003. After combining everything in a database, we performed batch queries to extract specific sales information.

Gramercy Park Sales Premium
In 2017, the Wall Street Journal commissioned StreetEasy to determine the sales premium on properties with access to Gramercy Park, which they pegged at $292,000. We used the results of this study in the final stage of analysis.

Methodology
In the first analysis, we compared the property tax bills of properties with key access to the park to properties in two other groups:

To get a sample of properties one to three blocks away from the park, we extracted property data from the tax roll database using the following query:

We filtered the resulting list of properties in the following ways:

We then separated single-family homes (Class 1) from multi-family homes (Class 2), and further divided the multi-family properties into co-ops, condos and rentals. We wrote a script to identify a unit as a condo if it has the same address but a different lot number as another unit on the list. Co-ops were identified manually from recent sales data (found on websites like StreetEasy and Zillow) and tax documents.

We used the property assessment rolls for the most recent fiscal year, 2019, in this analysis. The annual tax bill was calculated using the following formula taken from the DOF website:

To make comparisons between property groups with a variety of properties within them, we used the square foot as our metric of comparison. We computed two values for each group: 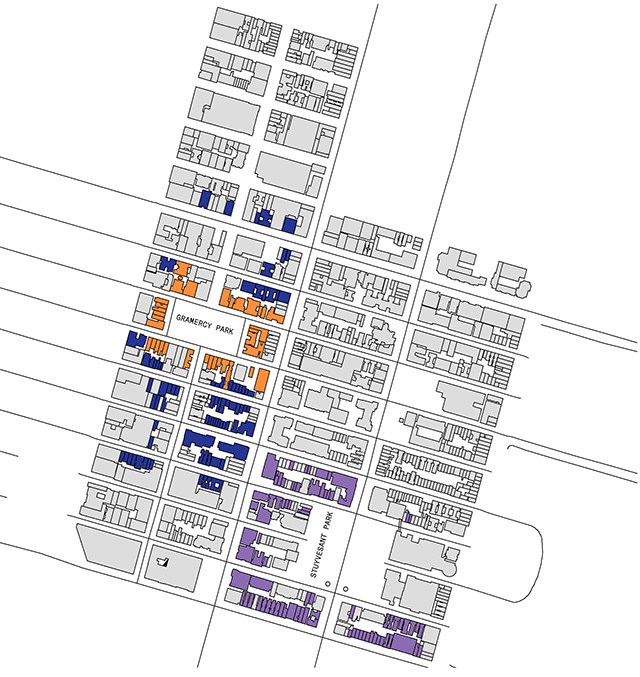 We found that for fiscal year 2019, single family home and co-op owners on Gramercy Park are projected to pay slightly more in taxes for their properties than corresponding property types one to three blocks away from the park. The difference is, on average, only $0.26 per square foot between the groups. Condos off the park will pay, on average, about $4 per square foot more than Gramercy-facing condos. Rental apartments without park access will pay slightly more, approximately $0.46 per square foot, than Gramercy-facing rentals.

Methodology
In this phase, we used the methodology from the first level of analysis to make comparisons for every year in the tax roll archives. Unfortunately, the rolls only go back to 2009. The property tax rates for each year (they change annually) were used when computing tax bills before exemptions and abatements.

Results
The results of the first and second levels of analysis are shown in the charts below: 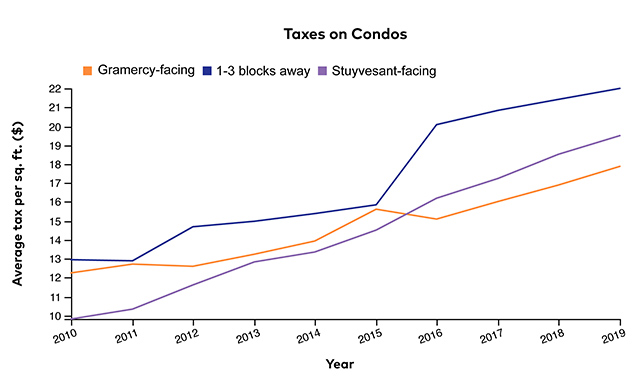 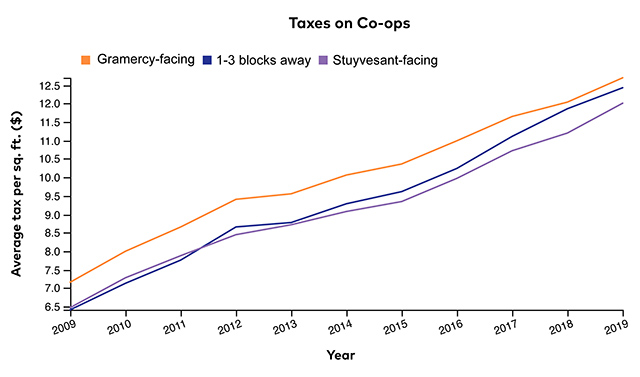 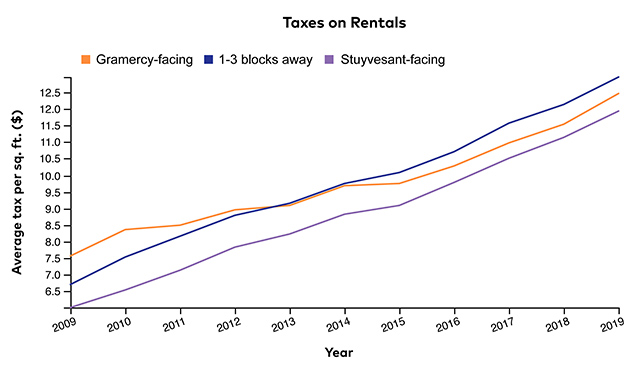 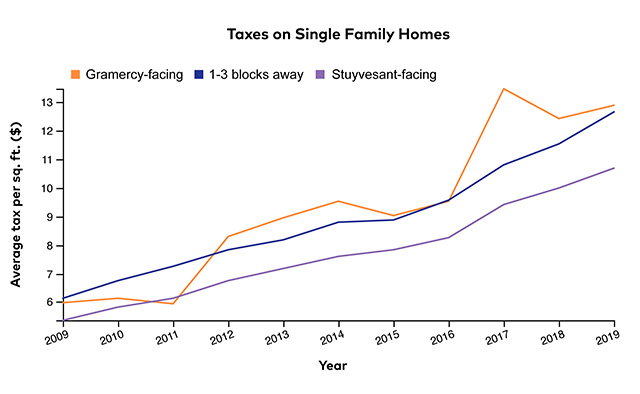 Methodology
For a third analysis, we wanted to approximate the amount of money the city may have lost over the past decade using their current method for assessing properties with park access.

In 2017, StreetEasy determined that these properties have a sales premium of approximately $292,000. We added this value, adjusting for inflation, to the assessed market values of all properties with park access for the years 2009 to 2016. There’s one significant caveat: since the city often assesses properties at lower values than what they actually sell for on the market, we would expect the premium to be smaller if the city were to determine it.

A property’s taxable assessed value, which is multiplied by the tax rate to arrive at the annual tax bill, is partially determined by its assessed market value. However, the city places caps on how much property assessments can increase for properties in tax classes 1, 2a, 2b and 2c. There are also many exemptions, such as the STAR exemption, that factor into this phase of the process.

Results
We determined that the current approach to taxing properties with park access could potentially cost the city an approximate $13.3M from 2009 to the end of fiscal year 2019.

Conclusions
The results of the analyses illustrate that over the past decade, there has not been a meaningful difference in the average tax per square foot of properties with access to Gramercy Park and those nearby, without access. Since the taxes between these two groups of properties are so similar, it’s hard to tell whether or not anyone is actually paying taxes on the value of the park. 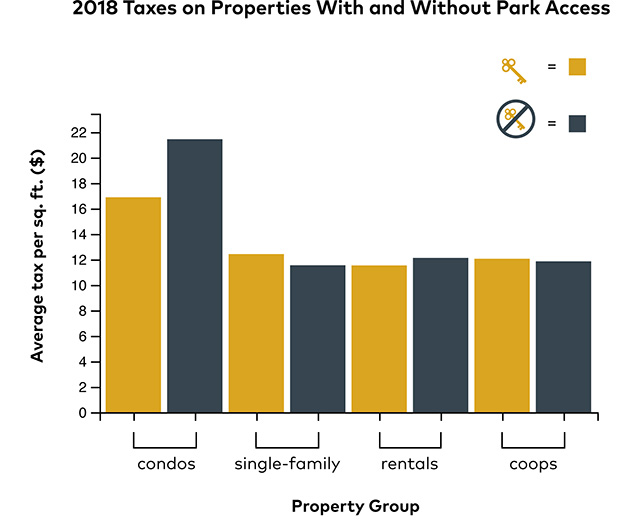 The Department of Finance Responds

Finance stressed that they assess and tax properties according to the letter of the law, that the law treats similar types of properties very differently, and that the system itself is vastly different than it was 100 years ago.

“There is no basis for equity in real estate taxes in the City of New York,” said Timothy Sheares, a deputy commissioner at the Finance Department.

For instance, they pointed to the fact that when determining a market value for co-ops and condos, they must ignore actual sales prices and instead use rental income. These buildings may be very different now compared to 1910. (We used Finance’s market values, to account for this reality and make fair comparisons.)

They also noted that some subclasses of buildings in property Class 2 have caps on market value assessment increases, while others do not, which can change assessed values and taxes, making it difficult to make comparisons within these groups. We made sure we had a comparable number of capped properties in our respective sample sets, which mitigates the skew that capped properties could pose to the result.

Finance also said that construction history and renovation play a role in assessed values and taxes. For example, they said we couldn’t make fair comparisons of Class 1 single family homes without accounting for their renovation history.

Still, we believe that the question of our investigation is not, “How do you value properties?” but “What is the result of these valuations?”

New York is the largest, most dynamic city in the country and everything that happens here leaves a paper trail.Gothamist Datawill scour all the data in the city and produce original analyses and visualizations to help make sense of it all.

Want to know which neighborhood has the best tasting drinking water? Or which landlords own the largest share of the housing stock? Need a breakdown of how the city plans to spend its NYCHA funding this year?Gothamist Datais on it.

But we can’t do it alone. Email data@gothamist.com to pose questions you want us to answer.

#department of finance
#gramercy park
#Gramercy Park investigation
#Gramercy Park Trust
#property taxes
#original
Do you know the scoop? Comment below or Send us a Tip