How Was The L Train This Morning?

It's Wednesday, it's 20 degrees outside, and Jon Stewart's abandoning us in our time of need. So, naturally, the L picked this particular morning to go completely haywire, as if you needed any more reason to sleep until you're dead. Go ahead and quit your job right now, we hear there are openings elsewhere anyway.

It appears this morning's L-destroying culprit was a train with mechanical problems at 3rd Avenue—an MTA spokesperson told us, "We had a wire hanging n/o Bedford Av from 5 a.m., was cleared and regular service resumed at 6:25 a.m. At 8:11 a Manhattan-bound train went into brakes in emergency at 3 Av, that train was cleared by 8:38." Here's what that did to the morning commute:

Future historians sorting through Twitter's time capsule will find the majority of this decade was spent trying to avoid getting shoved onto the tracks at Bedford Ave:

Happy commuting everyone. I really feel the pain in this girl's eyes. #ltrain pic.twitter.com/9TOjfpu1dB

If you were planning to go to Manhattan from Brooklyn this morning using the L train just give up. Delays from Rock Pkwy to 8th Ave.

Intrepid Williamsburg resident Nell Casey says the East River Ferry's not much better, should you feel like re-enacting the crossing of the Delaware: 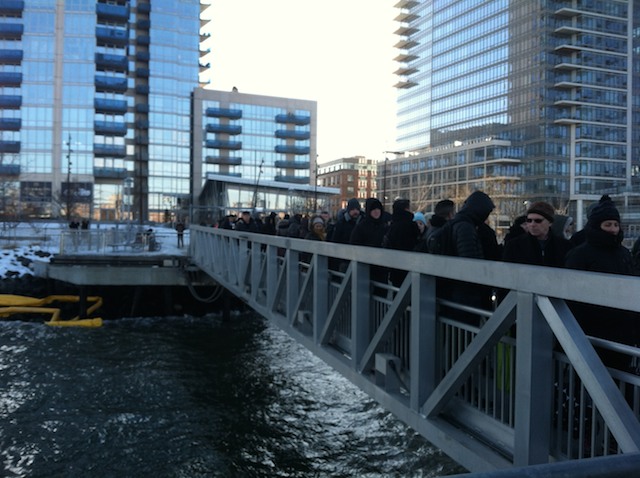 But the L train's not one to embrace the darkness:

Hooray, only two days until the L stops working!

#l train
#misery
#MTA
#sadness
#subway
#why god
#original
Do you know the scoop? Comment below or Send us a Tip