How Vulnerable Will NYC's New Payphone Wi-Fi Network Be?

Mayor de Blasio’s ambitious plan to convert 10,000 pay phones into public Wi-Fi hotspots promises gigabit Internet speeds, providing New York with the fastest municipal Wi-Fi network in the world. While LinkNYC is being pushed as a “first-of-its-kind communication network,” the city faces a daunting task safeguarding the privacy of its users.

“There’s always a chance that someone may compromise the system that runs the wireless network or just somebody sets up a wireless network and fools you into connecting with it, which is something that happens a lot,” said Patrick Nielsen, a senior security researcher at anti-virus software company Kaspersky Lab.

Hacking into a network requires skill. Fake wireless networks or “rogue access points,” on the other hand, are less complex and mostly rely on the cooperation of unwitting victims. Rogue access points can facilitate “evil twin” or “man-in-the-middle” cyber attacks, which can expose important information such as bank account details and e-mail log-ins. Fake Wi-Fi networks can be fabricated with a common wireless router, which makes it a popular technique among hackers; the tactic is commonly employed in airports, with attackers luring in Internet users with network IDs like “JFK Free Wi-Fi” or “LAX Free Internet.”

“Even though the city of New York’s network may be perfectly secure, which it probably is not, even if it was, there’s a chance that you go on the subway one day… you see this public network, but in reality it’s just an attacker that’s set up a network with the same name,” Nielsen says.

Another possible vulnerability lies within LinkNYC’s USB charging stations. Colin O’Donnell, the technical lead at Citybridge, the consortium in charge of the project, downplayed the risks. “The USB is not connected to a computer at all. The USB is only connected to the power…The USB charger is tamper-proof and it is installed in a rugged, durable metal chassis. We’re really confident about that,” he said.

O’Donnell dismissed questions about the system’s security as “fear-mongering.”

“I would just point out that it seems to me to be more of a scare tactic perhaps from some people who don’t want to see an incredibly large and powerful network deployed,” he said. “This is an amazing network. It’s a really disruptive service that’s ten times faster than the incumbent wireless service provider in New York City. We’re offering it for free,” he said. 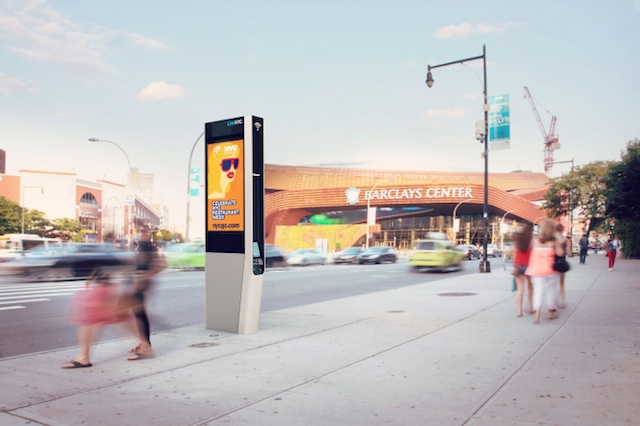 A rendering of a link kiosk in Brooklyn (LinkNYC)

O’Donell assured us that the network “takes into account sort of every major potential attack out there for a wireless network.” He downplayed the risk of rogue access points, saying that the LinkNYC network has been fitted with safeguards against it. “The fact of the matter is, this is not a new security threat, it’s been around for ten-plus years and it can affect any major service provider out there. We do take this seriously and we actively shut those down,” O’Donnell said.

LinkNYC runs on Hotspot 2.0, a new Wi-Fi standard that makes it easier to stay connected between access points, similar to the way a smartphone automatically connects to a new network while roaming. The same technology is used for the municipal Wi-Fi networks in San Francisco and San Diego. New York’s network improves on that model by including safeguards such as encryption and a block on peer-to-peer sharing.

City officials claim that a lot of “misinformation” has been disseminated about the project. They denied reports that the network will offer slower Internet speeds in less-affluent neighborhoods in Brooklyn, the Bronx and Staten Island. “To try and say that there’s an equity issue here is kind of ridiculous,” said Jeff Merritt, the director of innovation for the Mayor’s Office of Technology and Innovation.

The 500 LinkNYC kiosks, or “Links,” that will be put up in 2015 will all offer gigabit speeds, similar to existing services like Google Fiber and AT&T U-Verse Gigapower. The speed will be the same for the 3,500 Links that will be built over the first four years of the project.

Officials also noted that the access points would have a minimum range of 150 feet, contrary to previous reports that pegged that as the maximum distance. Merritt said that the reach of the access points may be expanded over the next two or three years.

If the plan gets approval, construction of the LinkNYC network will begin in 2015. The project has a timeline of 12 years, with 7,500 hubs expected to be built over the first 8 years.

The distribution of the kiosks is based on the location of the pay phones that they are meant to replace.

“It’s based on where there are dense commercial areas, where we can expect the most people,” said Nicholas Sbordone, the spokesperson for the city’s Department of Information Technology and Telecommunications. “That’s where we need the higher bandwidth, because more people would be logging on and using one access point at one time. That cuts across income levels,”

Christian Brazil Bautista is an experienced journalist based New York City.He's a recent New York transplant from Manila, Philippines. He has written for the Financial Times, Digital Trends and Rappler. He spends most of his days arguing about punk records over Skype and searching for forgotten soul record in bargain bins.

#linknyc
#payphone wifi
#wifi
#original
Do you know the scoop? Comment below or Send us a Tip