How To Talk Politics With Your Pro-Trump Family On Thanksgiving

My father's hands are hardened from decades of manual labor, but he hasn't had a steady job in eight years. His clothes are worn out. He's lucky to have health care through my mom's pension. He drives a pickup truck with too many miles on it and isn't sure how he'll afford a new one. He feels abandoned and ignored by both Democrats and Republicans and has stopped believing in politicians. He is the enigmatic "white working class" Trump voter.

My first and only "election talk" with my dad confirmed my suspicions that he'd vote for Trump. It made perfect sense. My dad grew up in Sartell, Minnesota, a mill town on the Mississippi River. Immediately after high school, he started working construction. For 38 years, he built houses and poured concrete. They were tough, good jobs that occasionally came packaged with union benefits. Throughout the '90s, his take home pay hovered around $30,000, and that, matched with my mother's teaching salary, kept our household afloat. We weren't rich, but we made do. My sister and I never questioned whether we'd go to college.

That all fell apart in 2008. The recession hit poor and blue-collar Minnesotans hard. While Wall Street banks were getting bailouts, 18,000 construction workers in my home state lost their jobs. My dad was one of them.

We teetered on the brink of financial disaster, but avoided it. We had help. My dad began collecting unemployment, Pell grants kept me in college, and Obamacare kept both me and my sister on a family insurance plan that saved us thousands a year. Things would have been different if someone had gotten really sick or hurt.

In 2013, the local press celebrated the return of every Minnesota job lost to the recession. Yet recovery was by no means evenly divided. My father and many of his peers, aging into their 60s, were still underemployed, doing the occasional kitchen remodel or deck installation—scab jobs. "New jobs! Prosperity!" The cheers rang out on TVs and at newspaper stands, while my dad grew alienated, angry, and ashamed. He'd voted for Obama twice, preferring his plain-spoken intelligence to McCain's fake toughness and Romney's corporate ties. But Democrats failed to make good on their promises of economic justice and blue collar renewal.

"We could use a little shock and awe," my dad told me over the phone last month. "Trump will shake things up a bit."

And so now I find myself one of the worried traveling from a liberal redoubt back to a face-to-face showdown with a Trump voter. If your situation is similar and you're dreading confrontation with family members and close friends, don't despair. Now is the time to go home and engage.

Consider it a progressive duty. Reaching out is part of the work that needs to get done. As our fellow New Yorkers gear up to donate, volunteer, and protest, those of us who will be sitting down at Thanksgiving with Trump voters must do our part. We have to put in the messy and unfun labor of listening to complaints about modern America, and then offer solutions that aren't built on fear and hatred for the other.

This is hard. It might not work on the first try and for some of us it might not work at all. I've had basically the same debate over police brutality with my father every time I've been home for the past three years. He still refuses to believe that white people have it easier in the justice system, and he thinks stop-and-frisk should be enacted nationwide.

Running up against my dad's bigotry and misogyny is the worst part of our relationship. I've learned countless important lessons from him in my life and I know he helped give me and my sister the opportunities we've had, but I can't square that all with the hatred. When his convictions boil down to bias, it makes me want to lash out—to scold and shout him back to the 1950s. But I try my best to remain calm and find some way to connect.

"Calling somebody a racist will make them defensive, and when someone's defensive you can't have a useful conversation," said Monnica Williams, a professor of psychology at the University of Connecticut and an expert on racial bias. "There's no learning going on. There's no change of perspective."

"The first thing you have to do is put your own strong feelings aside, because as right and just and moral as you may be, you have to take turns and listen to family members who may be Trump supporters," Williams continued. "They may see real reasons to build a wall and deport Hispanic people and keep Muslims out. But generally when people take radical positions, it's because they're afraid of something."

Before you even begin to talk, consider your expectations. Is it realistic to think you'll convert your conservative, or even "moderate" relatives to lefties in one sitting? The process will be slow, but don't let that discourage you. This might require a few more Thanksgivings. 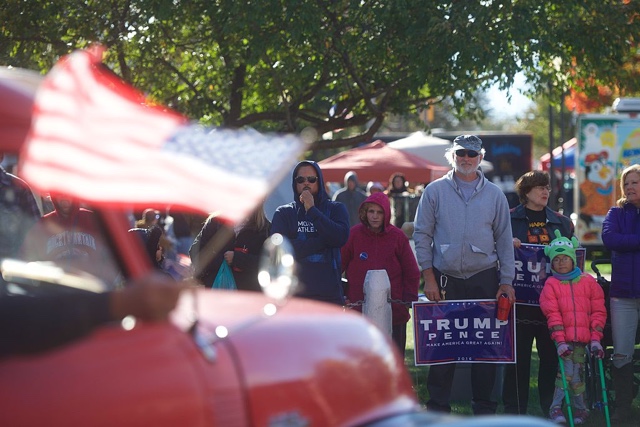 Over carved turkey and stuffing, I'll talk issues with my dad. Trump has claimed he will "Drain the Swamp"—he'll cast out corrupt bureaucrats and restore Washington to the people. So memorize these names: David Malpass, Jeffrey Eisenach, and Michael Catanzaro. The first is a former chief economist from the long-since-collapsed Bear Stearns who is now overseeing Trump's economic issue portfolio. The second is a longtime Verizon consultant currently shaping Trump's new F.C.C. Finally, Cantanzaro is a Koch Energy and fracking lobbyist—he's in charge of Trump's energy independence plan. Lay this out slowly and show how Trump's transition team is already a nest of corporate cronies. He is already rigging the system for rich corporations.

There are simple facts about Trump's economic policies his supporters can't deny, like how he lied about Ford's Kentucky Lincoln plant moving to Mexico to make it seem like he alone could bring it back. No one can reasonably argue that the coal industry can come back against natural gas and renewable energy. My dad himself acknowledges that drilling for oil on untouched federal land will flood the national supply, tank prices, and put even more miners and well workers out of business.

Should conversation turn to Obamacare, it's worth pointing out that only four percent of Americans are actually on insurance exchange plans, and that the program's main function is controlling the rising costs of private plans, which go up every single year. The program isn't perfect, but it still gives Americans more for less. In my family, several people with pre-existing conditions have relied on it for coverage, and I myself stayed on my parents' health plan until I was 26.

Fiscal policy is complicated, but you can carefully remind your pro-Trump kin that for every tax cut, spending must be slashed, and the Republican budget proposal decimates programs intended to protect the working class. Programs like government healthcare are not handouts—they are your relatives' rights as citizens.

As an alternative to this environment-killing corporate nationalism, talk about stronger labor unions, public infrastructure jobs, clean energy projects, and most importantly, tax policies that force corporations to pay their fair share. Under Trump's tax plan, the richest 1 percent will enjoy half of the benefits of his tax cuts, and a millionaire will score an average tax cut of $317,000. Is Trump really going to make good on his promises to help the working class by enriching his wealthy friends? And Trump's infrastructure plan will ultimately privatize public assets roads and bridges while enriching "a few well-connected people at taxpayers’ expense," as one Nobel prize-winning economist put it.

Patient, give-and-take discussion is the only way it's going to work. Winning an argument is a cheap thrill that fades fast. Right now, it is more important, compassionate, productive, and, yes, difficult to seek something other than a shouting-match victory. Doing the kind of bridge-building that so many are calling for requires sacrifice, and you should sacrifice your desire to prove a point or feel superior.

That your relatives likely feel forgotten by the political and media classes is all the more reason for you to prove that you're there for them. It's true that white people, especially white men, have ruled this country and ruled it brutally since before independence. But telling my dad "your time has passed, tough shit" is not a viable political strategy. At least not yet.

We needed people like my father, at least some of them, to stop Trump, and we will still need them if there's going to be any hope of turning back the tides of fascism. But coastal and urban progressives are for some foolish reason convinced that appealing to the white working class means giving away the store, abandoning every last principle from racial justice to recycling.

The truth is simpler. So many white working class voters like my father are fickle free agents looking for a good deal. Give him a genuine path out of poverty and purposelessness and he'll show up to vote. He'll countenance social policy that seems too liberal if it means getting off unemployment and not having to use his kid's graduation money to make a mortgage payment. And he'll quietly march in step to the drumbeat of urbane liberalism if it comes with the promise of a good job and a way out of shame.

My father's pain, anger, and struggles are legitimate. But he has been lazy and misled about where to place the blame. Trump told him it was immigrants, Muslims, and the establishment. But the truth is that the super-rich capitalists Trump is now funneling into the federal government left my dad and millions of other people broke, discouraged, and, yes, oppressed.

There is a way to punish the wealthy and powerful for their destruction of the white working class, and that retribution can march beside the needs of the urban, the educated, and the marginalized. Trump's call to white nationalism caught the ear of my father and millions like him across the country. We will have their ears at the Thanksgiving table. That's a good place to begin.

#debating
#talking points
#thanksgiving
#original
Do you know the scoop? Comment below or Send us a Tip