So you've made the bold decision to take a cab today. Congratulations! You're tired, it's late, and you're a grown-up who need not run the risk of engaging in a urine-spattered subway brawl at 3 a.m. Pleased by your choice, you stick out your arm; a yellow cab swerves obediently to your feet. "Where you going?" the driver asks. You hesitate. "Brooooklyn?," you venture, trying to make the word sound as much like "Union Square" as possible. "Broonion Squareklyn?" You sound like Leonardo DiCaprio once the Lemmon quaaludes kick in. The cabbie is on to you, and he speeds away, splashing your trousers with poo snow in his wake.

The New York Times can pen all the "Brooklyn has arrived" #smarttakes in the world, but unless you find a way of metastasizing those stories into crisp 20 dollar bills, living in the outer boroughs means preparing to spend a lot of time being spurned by cab drivers.

Like all Brooklynites, Jim Search—a six year resident of Crown Heights—has grown weary of brazen lawbreaking by cabbies who refuse to take him home. He's squabbled with drivers in the past, he said, but never really pushed for justice—there's always been too much red tape. But that changed one night in December, when Search got into the back of a cab at 4th Avenue and 14th Street in Manhattan and began the usual heated tete-a-tete with the driver.

"I'm going to Crown Heights," Search said. "I'm not going there," the driver replied. But Search wasn't really in the mood that day. He remained in his seat and called 311. Prospective fares approached the window, but Search shooed them away. "People were coming up, knocking on the window and I'd say 'Oh, he’s not done, you can go.'"

The driver, incensed by Search's behavior, left his seat and walked to Search's door, opening it for him. Search refused to be deterred. "I looked him in the eye and I said 'Look, if you touch me, I’m calling the police.'" He stayed on the phone with the 311 operator for the next 15 minutes, reporting all the necessary information (medallion number, name, intersection) before finally getting out.

The Taxi and Limousine Commission called Search a few weeks later and asked him to testify over the phone. The process took around 20 minutes, and this week, Search received the following notice from the agency, alerting him that the driver had been fined $1,650 and had four points added to his license: 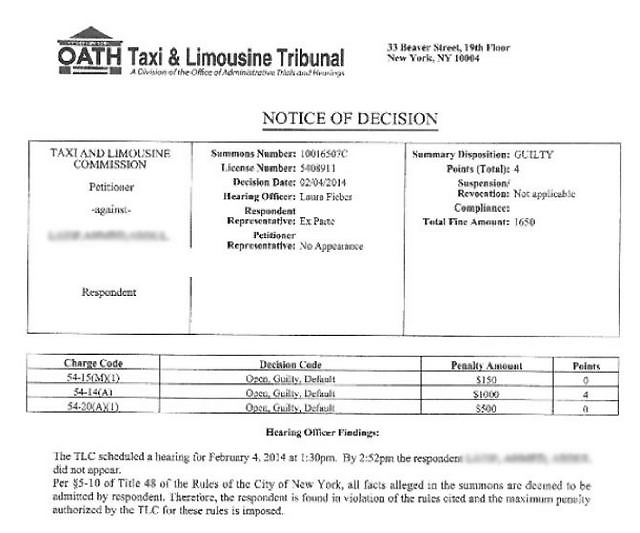 TLC spokesperson Allan Fromberg said the agency makes it as easy as possible to report obstinate drivers who refuse to adhere to the law. He said that passengers who have been refused service should always make an effort to collect a drivers' medallion number, and call 311 with as much information as possible. The TLC will mail the passenger a confirmation, and give them the opportunity to testify in a trial that can be held over the phone. It sounds like a pain in the ass, but, Fromberg said, the payoff is that driver's feet will be held to the fire, providing better service to outer borough dwellers in the long term.

"It's absolutely worthwhile—passengers who have gone through it regularly give feedback that it's a very satisfying process for them to have gone through," he said. "It helps us hold drivers appropriately accountable when they’ve done something that’s a violation of our rules."

In instances where the driver locks the door until the destination has been revealed, Fromberg advises passengers to record the cab's medallion number, which is visible in several places including along the sides of the vehicle, on the license plate and on the roof light.

A driver who is found to have refused service will be fined on the first offense, fined and suspended for 30 days on the second, and could face the permanent revocation of their license on the third.

Search said the process has been gratifying.

"I wholeheartedly say you should do it," he said. "I feel like I finally got some justice."

#cabs
#outer boroughs
#taxis
#tlc
#original
Do you know the scoop? Comment below or Send us a Tip