How To Get Rid Of Ants? (Seriously HOW?)

Welcome back to Summer Sucks. For this week's installment, we're talking about ants, a lousy summer house guest and an even worse midday snack. [Warning: Graphic ant content below]

This is difficult to talk about, so I'm just going to launch into it: Last week, while sitting in the office preparing to enjoy a homemade chocolate chip cookie, I inadvertently disseminated and possibly ate a significant number of ants.

The cookies had been given to me by a talented baking friend, and I guess they'd been left on my kitchen counter overnight, wrapped in loosely-secured tin foil. I brought them to work on Thursday, then spent most of the morning looking forward to my afternoon reward. Around lunchtime, I placed the cookies on our shared desk clump, at which point [shudders] a torrent of ants spilled out, seemingly surprised to find themselves in Manhattan.

The realization that I'd been infiltrated, that my delicious snack had already been claimed, came moments after swallowing a medium sized bite. Given the circumstances, I'd say I played it cool.

"It was a really piercing wail," witness Jake Dobkin recalls. "I have a seven year old daughter with a bug phobia and I can honestly say I've never heard a person scream louder than Jake O. did that day." (There are conflicting reports on this point.)

As I launched into a hysterical panic handled the situation calmly and professionally, quick-thinking Gothamist editor Chris Robbins took care of the many-legged pile with Windex and napkins. A few more ants have allegedly been spotted in the area since, though their origins remain unconfirmed. I did not get sick. I did have a semi-violent dream of being trapped in a pulsating ant farm.

And that's about all I would like to say about the workplace-ant-cookie debacle for now, and also, forever.

Unfortunately, nearly a week later, the situation on the ground has only worsened. These sneaky fuckers are still rampaging through my apartment, rubbing their spindly antennae on the counters, probing the bathroom for chunks of toothpaste. They are a well-organized syndicate, composed of multiple flanks moving ceaselessly and with great purpose.

My attempts to crush them have so far failed. Deploying bait traps on elevated surfaces seemed to work for a few days, but the ants have since returned in even greater numbers (we have a dog, Nancy, who would happily eat the poison and die, thus limiting the possible trapping region). The DIY remedies have been even less successful: I've now tried both vinegar and cinnamon, the cumulative effect being that my kitchen smells like pickled Cinnabons, which my new roommates don't seem to mind at all.

A brief Internet search confirms that I am not alone. Sometimes ants are easy to get rid of; other times they're not. A coworker shares that her dad kept a snapping turtle in the basement to gobble up household ants. I'm not there yet, but it's not out of the question.

I decide to call Deborah Gordon, a biologist at Stanford University who's spent decades studying ant behavior. When I tell her that I am losing the battle against these goddamn ants, she explains that my first mistake was ever believing I could win.

Despite the cottage industry around ant extermination, human efforts to dispose of the insects mostly just amount to "the illusion of control," says Gordon. "Wiping them out is not an option. The best you can hope for is diverting them elsewhere. We don't really control what they do."

Her fatalism is backed up by science. After spending eighteen months surveying people living in the Bay Area, Gordon found that ant killers such as baits, cleansers, sprays, and herbal remedies had a negligible impact on Argentine ant infestations. Instead, the insects' behavior seemed to be largely governed by weather: they arrived when it was searingly hot or excessively damp, then returned outside when conditions became more tolerable.

You'll recall that in the weeks leading up to last Thursday, it was both very hot and very wet. As such extreme weather events are projected to grow more frequent under climate change, so too are pest infestations. We'll see who's laughing then! 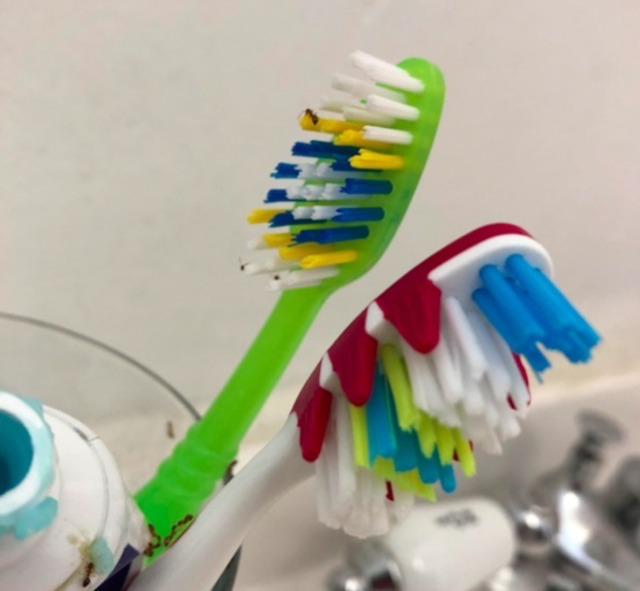 The good news is that there are at least some steps one can take to minimize an ongoing ant problem. According to Gordon, the first step is figuring out what the ants are seeking, removing their food source, then destroying their pheromone trail. Wiping down the area with soapy water or a household cleaning product will eliminate the greasy chemicals that serve as a signal to other ants that something worthwhile has been found.

Things get a bit more complicated if they are foraging for water, says Gordon. When the weather is especially dry, ants are known to follow the condensation of pipes into homes, carrying little droplets of water back to their colonies. (Another fun ant fact: all male ants die after a single mating flight; the ones scurrying around your home are purely female workers, and typically the oldest in the colony.)

It's not as though ant-killing solutions are always worthless. Gordon says that the boric acid traps, which trick their targets into carrying bits of poison back to their colonies, can sometimes be effective. Those are the Terros, Hot Shots, PICs, etc. But these only work for ants that have one Queen. If you're battling a species that reports to several Queens, or if you have a multi-colony infestation, those traps are pretty useless.

There are roughly 14,000 different types of ants worldwide, but no comprehensive account of New York City's own species. For the layman, figuring out which kind of ant is invading your home is not particularly easy. I've narrowed mine down to the common odorous ant or the pavement ant, the latter of which supposedly smells like bananas when squished (I couldn't tell you, as I will not be bringing them near my face anytime soon.)

So my guests remain, creepy squatters that will not be evicted, but might hopefully leave on their own volition. For now, I've attempted to make peace with the indomitable pests, reminding myself that things could always be worse. The most humiliating ant scenario is still better than any interaction with a bedbug. After years of writing about other people's infestations, maybe this is my comeuppance. I can accept that. At least I didn't swallow a rat.

[Editor's note: Got ants? Don't lose hope—despite Jake's hopeless journey, the Terro baits worked like a charm for me last summer. Maybe what he really needs to get rid of is the dog?]

This has been the latest installment of our NYC Summer Sucks series. Hit us up if you have any questions (use "Summer Sucks" in the subject line), or just want to commiserate. And please hashtag us in both your summer fashion photos and your summer misery photos with #NYCSummerSucks.

#ants
#how to get rid of ants? @main
#make it stop
#seriously how
#summer
#summer sucks
#summersucks
#original
Do you know the scoop? Comment below or Send us a Tip
A new Gothamist is coming! We’ve moved comments over to our beta site. Click here to join the conversation and get a preview of our new website.