How The RNC Turned A Private University Into Police Barracks

In the months leading up to the Republican National Convention, students at Case Western Reserve University were not particularly concerned about the impact the RNC would have on the campus at large. The university is, after all, five miles away from downtown Cleveland, where the majority of events would be taking place, and where protesters and heavily-armed police were expected to crowd the streets during the nomination of lightning-rod candidate Donald Trump. But last month, when an anonymous faculty member alerted law student Amanda King and undergraduate Makela Hayford exactly how involved the university would be in the convention, they were shocked.

“He told us that there would be 1500 police living on our campus,” King told Gothamist. ”At that moment, we had no idea who they would be, what they were doing, and the university was not telling us anything about it.”

King and Hayford, two leaders of the African-American community on campus, immediately began pressing the university for more information. They wanted to know why the private university had agreed to house over hundreds of out-of-state cops in the midst of national divisiveness over the role and judgement of police officers in communities of color. The university is situated in the middle of several African-American neighborhoods, and just down the road from the Cleveland neighborhood of Hough. 50 years ago this week, the National Guard was sent into Hough after residents rioted following attacks by white business owners against middle-class blacks. Meanwhile, Cleveland's police department is currently under federal oversight following widespread abuse by police and the high-profile murder of 12-year-old Tamir Rice.

“The administration released a response after we told them of our concerns, but then they accused us of profiling the police,” Hayford said. “They told us to stop asserting that the police were bad, and that this attitude we were expressing was in direct opposition to the university’s core values. We were infuriated.”

King pointed out to the university that its core values, which dictate expectations of student and faculty conduct on campus, also specified that there would be no guns on campus, but that value was being ignored. King and Hayford, along with other enraged students, launched a Change.org petition outlining their concerns and demands, which include that police keep their weapons off campus, and refrain from drinking or doing drugs while staying in the dorms. They were also curious as to why the university agreed to house the police officers in the first place, interrupting a busy summer semester at the university. Was the university somehow making money off of this deal?

“The decision to house the officers was not driven by finances,” a Case Western Reserve University spokesperson told Gothamist. “The city asked for the university’s assistance, and as a member of the Cleveland community, we felt a civic obligation to assist.” 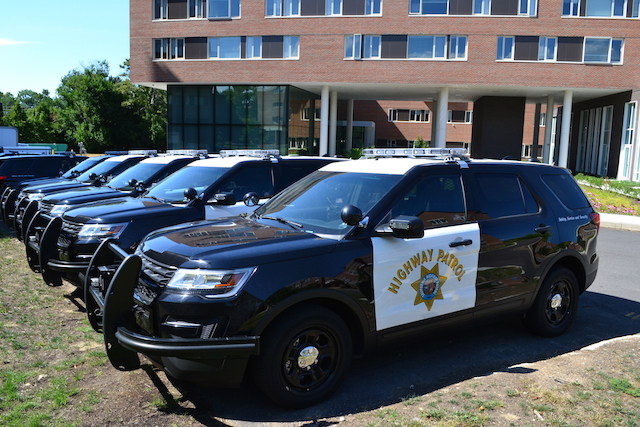 During special national security events like a convention, cities like Cleveland, with police departments deemed too small to provide enough security for the event, can pull in police departments from across the nation to provide extra support. Cleveland is receiving police reinforcements from states as far away as California and Arizona, and arming them with 2,000 riot control suits and 26-inch batons. This raises serious concerns when it comes to out-of-state officers descending on both neighborhoods and populations with which they’re unfamiliar.

“One of the biggest issues police have is creating a level of trust with those that they police, and that’s incredibly difficult when you’re coming from out of town and just for a few days,” said Melissa Bilancini, a law student and coordinator for the National Lawyers Guild in Cleveland. “Couple that with an intense situation, and a lack of accountability if these officers don’t face rules and protocol, and the possibility there for the violation of rights is something I’m deeply troubled by.”

In response to student concerns and the Change.org petition, earlier this month month Case Western scheduled two separate information sessions for students, where officials fielded questions and explained what the role of the officers would be on campus. There would actually be 1700 police officers on campus, they informed the students, with 200 National Guard members assigned to protect the police officers from possible attacks.

After police shot two black men last week and five cops were killed in a sniper attack in Dallas, the administration announced they were now taking every effort to clear out campus during the convention. Any student who wished to leave campus would be either flown back home or reimbursed to stay elsewhere in the city.

The university also instructed professors to hold classes off-campus next week, or to arrange them to be held virtually. Professors were given one week to propose a plan the administration would have to approve, further truncating an already cramped summer semester.

“We’re abdicating our educational mission in order to be a garrison for riot police and the national guard,” said one professor, who wished to remain anonymous. They had been scrambling to try to find a place for their students to meet, just a week before finals.

By Friday afternoon, students with packed bags milled on sidewalks waiting for rides as police departments from across the country began rolling onto campus. Makela Hayford will be flying back home to Kansas City this weekend, while Amanda King, who sits on the Cleveland Community Police Commission, will be observing the events of the next week with an eye on the conduct of both the Cleveland police—who have jurisdiction and the power to make arrests—and the outside police departments, who are supposed to be strictly in support roles. After the RNC, King and Hayford will return to working on Shooting Without Bullets, a project that puts cameras in the hands of teenagers in Cleveland in response to police violence against young people nationwide.

“We are not done with the administration,” King said. “They are not going to get away with bringing these militarized police forces on campus and trying to appease students by flying us home. There are larger issues and implications. People in this neighborhood don’t have the opportunity to just fly away.”

Correction: An earlier version of this story stated that officials added 400 more police officers and National Guard members to the university housing in response to the shootings in Dallas. The university tells Gothamist that this was always part of the security arrangements.

#election 2016
#longform
#republican national convention
#RNC
#original
Do you know the scoop? Comment below or Send us a Tip