How The Looming L Train Shutdown Could Transform 14th Street

Proposals to alleviate the trauma of the impending 15-month L train shutdown tend to fall into one of two categories. First, there's the zany: the floating inflatable East River tunnel; the East River gondola. Then, the actionable: pedestrian-centered proposals for main transit corridors along the line. Advocacy group Transportation Alternatives has positioned itself firmly on the actionable end of the spectrum, urging entrants to a recent L-ternative contest for 14th Street to think practically.

"The world will someday be ready for your levitating omnibus, but for now, buses, bicycling, and walking are the most practical, grounded solutions," the group wrote last fall (in collaboration with Gothamist). The goal, ultimately is to influence the Department of Transportation, which controls street design and access, and the State-run MTA, which holds the purse strings on bus expansion.

This spring's winning plan envisions a 14th Street free of car traffic—a concept with the endorsement of city planners, politicians and advocates—plus a six-stop shuttle bus operating on dedicated lanes, and protected bike lanes. The shuttle would connect to a new cross-bridge bus, carrying Williamsburg commuters on a dedicated lane over the Williamsburg Bridge. Among the runners-up are a proposal for temporary barriers separating dedicated bike and bus lanes on 14th Street, and a plan that would close certain blocks of 14th Street to traffic. 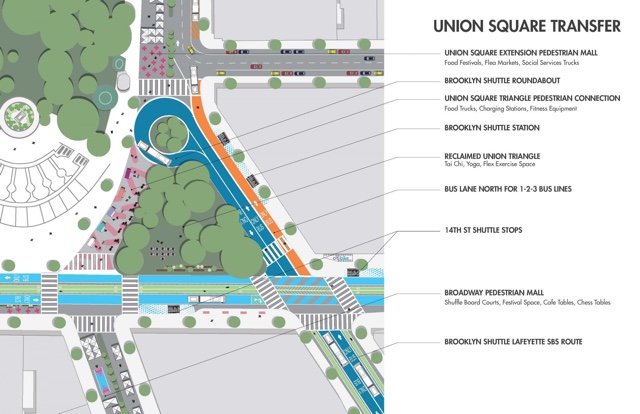 The winning plan calls for a car-free Lafayette Street/4th Avenue between Delancey and Union Square.

The winning design, conceived by Cricket Day, Becca Groban, Christopher Robbins (a former Gothamist editor), and Kellen Parker, would bring Select Bus Service to 14th Street in both directions. A dedicated 14th Street Shuttle would run in a continuous loop every four minutes during rush hour.

Brooklyn commuters hoping to reach 14th Street would also get a new shuttle bus from Williamsburg, over a dedicated Williamsburg Bridge lane to Delancey Street. That shuttle would then turn north at Lafayette Street, conceived by the designers as a car-free dedicated bus highway up along 4th Avenue to Union Square. (The shuttle would make stops for subway riders at Delancey/Essex and Houston Street stations.)

Robbins told Gothamist that even with Lafayette closed to traffic, drivers could travel north on the Bowery and Third Avenue.

"Rush hour on the Williamsburg Bridge and Delancey Street is pretty bad now, so imagine it when an extra 250,000 people need to get into Manhattan for work," Robbins told Gothamist in a statement. "We think the entire plan is actionable because the city and state should take bold measures to address this crisis." 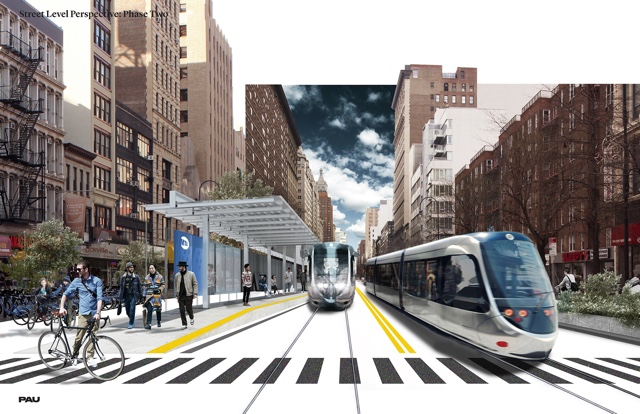 The second-place proposal, from PAU Studio, envisions temporary pavilions separating two dedicated bus lanes in the center of 14th Street from dedicated bike lanes on either side (the pavilions would be elevated so that riders wouldn't have to step up onto the bus—one of the city's selling points for its controversial BQX proposal). Designers imagine solar power for the signage, and advertisements to cover the cost of each pavilion. Once the L train renovations are complete, PAU predicts NYC would be sold on the car-free 14th Street, scrapping cars permanently and constructing a BQX equivalent for Manhattan.

"We didn't want to be a little too greedy, and we wanted to be as practical as we could," Wagman told Gothamist. "We wanted traffic to be controlled in front of Stuyvesant and Union Square."

The DOT and MTA did not immediately respond to requests for comment on the contest, though the MTA has previously said it will "work closely with the City and State to develop routes and determine service levels needed to accommodate projected ridership."

To date, the MTA has confirmed that it will expand service on the J, G and M trains during the L shutdown, with additional subway cars and more frequent rush hour trains (keep in mind that expanded M service will require extensive M line closures for repairs). Other ideas that have been floated—expanded ferry service, B39 bus service over the Williamsburg bridge—will require coordination with state and city agencies.