How Safe Is 'Sanctuary' For New York City Immigrants?

Hours after President Donald Trump signed an executive order threatening to withhold federal funding from so-called "sanctuary cities"—cities including New York that limit communication between police, prisons, and federal immigration officials—Mayor de Blasio convened an emergency press conference to insist that he would not allow Washington to "change how we enforce the law."

"This is the American dream right before your eyes," he said, motioning to a diverse assemblage of staff members to his left and right. "And we are not going to allow it to be undermined."

If Trump attempts to withhold federal funding from New York over its immigration policies, he said, city lawyers will be "in court immediately to stop it."

With the mayor standing so firmly behind New York City's immigrant protections, it's worth reviewing the limits of these protections, particularly in the face of the expanded and emboldened Immigration and Customs Enforcement apparatus Trump envisions. (You can also review our guide for immigrants in New York, in multiple languages, here.)

Since 2014, New York City has refused to detain immigrants in city precincts or jails at ICE's request, under most circumstances. The goal of NYC's detainer law, says Camille Mackler, director of legal Initiatives for the New York Immigrant Coalition, is to protect undocumented New Yorkers who could otherwise be turned over to ICE for minor offenses, like drinking in public or turnstile jumping.

Nisha Agarwal, New York City's Commissioner of Immigrant Affairs, published a column on Medium on Thursday, titled "There's Misinformation Out There about NYC and Immigrants — Here Are the Facts." In it, she explained that NYC maintains a list of 170 "violent or serious" felonies that the NYPD and DOC cooperate with ICE on—a wide-ranging list that includes weapon possession, rape, murder, burglary and arson.

Agarwal goes on to assure the undocumented community that those who "commit infractions that are not, under state law, serious or violent felonies, such as getting a parking ticket or possessing a small amount of marijuana," benefit from New York's protections, and will not be detained for ICE. "The penalties are the same as for any other New Yorker," she said.

But ICE is able to conduct raids and detain immigrants in New York City, regardless of NYPD cooperation. Under President Obama, ICE agents conducted hundreds of raids in the city, at courthouses and private residences.

"All the detainer laws do is prevent ICE from going and picking somebody up [in NYPD or DOC custody]," Mackler said. "They're still... a law enforcement agency with investigative ability."

And Trump would like to see their mandate significantly broadened. His executive order regarding sanctuary cities targets "aliens"—a legal term that includes New York's estimated 500,000 undocumented residents, as well as anyone with a green card or temporary visa.

Trump's order for a border wall with Mexico also targets anyone who has been charged with a crime, whether or not they have been convicted. While Obama deported more than 400,000 people annually during the early years of his presidency—more than any president before him—he narrowed ICE's focus in recent years to convicted felons. Trump would see that effort rolled back.

"ICE officials now could target a much wider range of non-citizens," Yale-Loehr clarified. "In the past, immigration enforcement officials were supposed to focus on people who had serious criminal convictions. By contrast, the new executive order allows them to prioritize even people who have only been arrested, and not yet convicted." 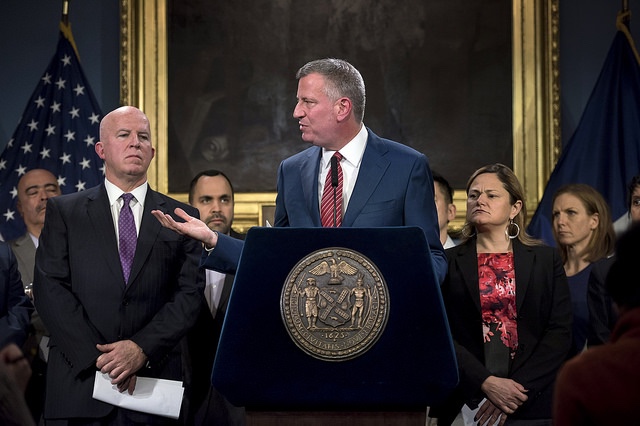 Immigration law experts emphasize that Trump's expanded definition of criminality calls for a much larger ICE apparatus—one that would require substantially more funding and many new hires.

"There are only so many ICE enforcement officials, and the new executive order basically makes everyone a priority," said Yale-Loehr. "So it's going to be hard for them to actually round up more people or actually deport more people, unless congress funds the money necessary to hire more ICE enforcement officials, hire more immigration judges, build more immigration detention centers, and get more planes or buses to actually send people back out of the country."

By targeting all "aliens," including green card and visa holders, Mackler added, Trump is also "certainly opened up to legal challenges."

Still, she said, Trump's orders have a serious impact on immigrant families, regardless of the extent to which he manages to implement them. "I think what we need to be focused on today is the impact it's having on our communities, who were afraid leading up to November 8th, who have been absolutely terrified since November 9th, and who are in a complete panic at this point," she said. "If immigrants are too afraid to leave their homes, we lose. As a city, as communities, as a state."

At the mayor's Wednesday press conference, a reporter asked de Blasio if he plans to scale back broken windows policing—which disproportionately targets low income New Yorkers of color for minor offenses like turnstile jumping—in the wake of Trump's executive orders. The orders, as written, would impact any immigrant in the criminal justice system, after all—a system that broken windows feeds.

"Look, let's take one thing at a time here," he said, adding, "We're a long way from this having the effect that so many wish it to have. In the meantime, this is the safest big city in America. The NYPD continues to drive down crime while healing the relationship between police and community. We're going to stay on that track. It's as simple as that."

Brian Lehrer pressed de Blasio on the subject on Friday, on his "Ask the Mayor" segment: would de Blasio consider reducing turnstile jumping to a civil offense, to protect immigrants threatened by Trump's order?

The Mayor's Office also stated that misdemeanor arrests decreased 19% between 2012 and 2015. "This Mayor has already led a dramatic shift away from low-level arrests to offenses that can be more effectively dealt with through summonses," said spokesman Austin Finan.

Immigration Project Director Liz Markuci said on Friday that she appreciates de Blasio's pledge to oppose Trump on immigration. However, in treating this as a seperate issue from broken windows, de Blasio is missing the point. "You as a mayor say you're going to stay a sanctuary city, but at the same time the people who are working under you are making arrests in a biased way," she said. "Without addressing that issue it's an empty gesture."

"If you are trying to tell a group of teenagers [of color], 'Hey, New York City is behind you,'" she added, "That is not their experience."

#broken windows policing
#donald trump
#mayor de blasio
#sanctuary city
#original
Do you know the scoop? Comment below or Send us a Tip