For Blima Marcus and her fellow ultra-Orthodox Jewish nurses, a 40-page booklet about vaccines that’s been circulating in Brooklyn’s Williamsburg and Borough Park neighborhoods is Public Health Enemy No. 1.

Called “The Vaccine Safety Handbook: A Handbook for Parents,” the magazine comes across as an official publication, cleanly designed and sporting extensive footnotes citing scientific studies. Published by Parents Educating and Advocating for Children’s Health, the booklet is commonly known as the “PEACH magazine” and has been passed among friends and relatives in ultra-Orthodox—also known as Haredi—communities.

And cover to cover, it’s full of misinformation about vaccines.

“When I got my hands on a copy...I realized this was a piece of anti-vaccination propaganda,” said Marcus, a nurse practitioner at Memorial Sloan Kettering and adjunct professor of nursing at Hunter College.

Amid the largest measles outbreak in nearly 30 years, and a rise in vaccine hesitancy within the ultra-Orthodox community, Blima and other members of the Orthodox Jewish Nurses Association decided to do something about it. They have been compiling a book of their own to respond to PEACH’s assertions, which is slated for publication in the next few weeks.

“We decided to be a little tongue and cheek and call it PIE, Parents Informed and Educated,” Marcus said. There’s a rotten peach on the front cover.

She blames the PEACH magazine, and the hotline also run by the group, for the spread of fears about vaccines in their communities. Marcus realized the influence the PEACH book had while she was giving presentations about vaccines in living rooms for groups of Orthodox moms; she found the book spooked many of them. They had questions about the book’s claims, but they weren’t getting their questions answered at the doctors office.

“They just say it’s safe and your doctor knows best,” Marcus said. “They’re just trying shut down the conversation. And that doesn’t work in this area because it’s a very emotional topic for women.” 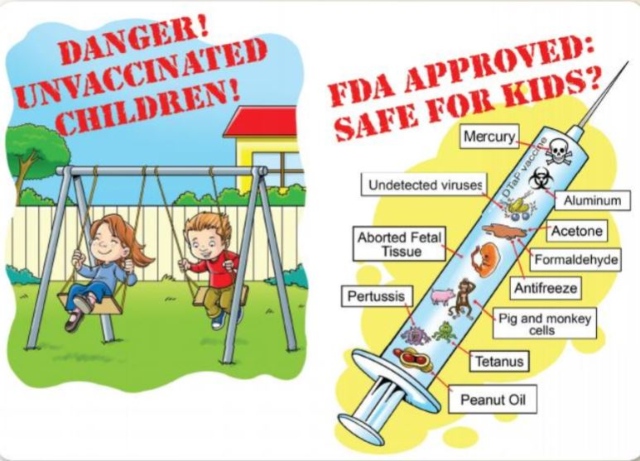 A cartoon from the PEACH booklet spreads misinformation about vaccines.

Marcus felt like there needed to be a different approach to tackle PEACH, and have have been dissecting the PEACH magazine line by line, examining the source, and labeling each claim as “false,” “distorted and incomplete statement,” “pants on fire,” etc.

“No one has actually come out and provided refutations to their claims,” Marcus said. “If there is some evidence that they bring forward they’re very easily discredited.”

The PEACH booklet has sections on vaccines and autism and Sudden Infant Death Syndrome. Anonymous anecdotes describe babies dying or becoming autistic after getting vaccinated. Passages hint at grand conspiracy theories about governments using vaccines to decrease the size of the population.

Published by Orthodox Jews, the booklet is targeted to ultra-Orthodox Jews, with excerpts from the Torah, bits written in Hebrew, and a letter signed by several rabbis from Lakewood, New Jersey, and Philadelphia in support of parents of unvaccinated children.

She says she understands why some Jewish parents are hesitant about vaccines—“There’s just a lot of almost genetic fear of whether what the government says is true an if they want your good”—but accuses PEACH of unfairly exploiting those fears. The magazine even references the Nuremberg trials of Nazi leaders. 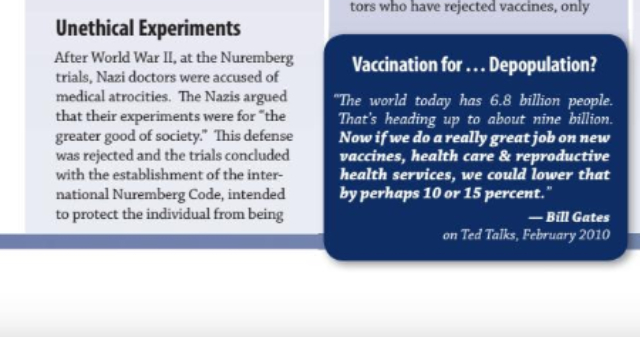 Since last October, New York City’s Health Department has identified 181 measles cases among mostly unvaccinated children or babies too young to be vaccinated. It’s three times as many cases as 2013, the last time the city saw a measles outbreak, which was also associated with the ultra-Orthodox community—and it’s the largest outbreak of the potentially lethal virus since the early '90s, though no one has died.

As the nurses scrutinized the booklet’s claims, they identified cases where they said the PEACH manual mischaracterizes the findings of the studies it cites, or cherry-picks information from them. One example: the PEACH manual states that 93 percent of women in clinical studies reported “adverse reactions” to the human papillomavirus vaccine (HPV), but fails to mention the reaction was arm soreness.

“That's just upsetting to see them do that to people in their own community,” Marcus said.

In the book’s section on measles, the manual mentions that the World Health Organization determined that people with the measles, mumps and rubella vaccine were 15 times more likely to catch measles during an outbreak. The citation refers to a 1984 book written by an anti-vaccination doctor. But the World Health Organization told WNYC they never made such a statement.

“They keep using one scientist who runs an anti-vaccine website but has published a book about how his daughter communicates with aliens,” Marcus said.

She’s referring to Neil Z. Miller, prominent voice of the anti-vaccination circuit and publisher and author of several books about vaccines. He’s also published a book written by his daughter, Ambassadors Between Worlds, Intergalactic Gateway to a New Earth, about how her sudden spiritual awakening had allowed her to communicate with extraterrestrials.

In an email to WNYC, Miller defended his conclusions about vaccines. “All of the information in my vaccine books comes from medical journals and is the result of my own hard work researching data,” he wrote. 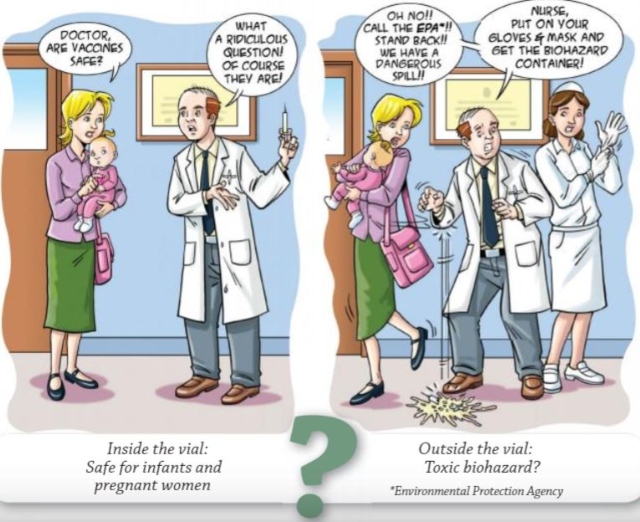 A cartoon in the PEACH booklet spreads misinformation about vaccines.

This type of slickly produced misinformation from anti-vaccination groups is familiar to Sean O’Leary, a spokesman for the American Academy of Pediatrics, who specializes in vaccines and vaccine preventable illnesses at Children’s Hospital Colorado. He says he’s seen the claims in the PEACH magazine used by anti-vaccination groups across the country for years.

“They use these sort of leaps of logic if you’re not really paying attention and you don’t live in this world of reviewing scientific literature it’s very easy to miss,” O’Leary said. “I absolutely understand how parents get taken in by this. They’re trying to do what’s best for their children and these misinformed pamphlets; they play on parents’ fears.”

But O’Leary added, the same thing that made the PEACH manual so dangerous, might make the PIE book by the group of nurses a success.

“This was being shared parent to parent. You get it from a trusted friend you think, ‘Oh this must be true,’” he said. “So the fact that people within the community around the community are helping dispel those myths I think is very powerful.”

One of the contributing researchers to the PEACH manual is Barbara Loe Fisher, who co-founded National Vaccine Information Center, a group that lobbies against mandatory vaccination laws. Contributing editor Moishe Kahan, who lives in Williamsburg, helped facilitate the PEACH group’s conference calls, according to two doctors who were contacted by him. When reached by Gothamist/WNYC at his Williamsburg apartment, he threatened a reporter with arrest, adding, “I have no interest in talking to fake news reporters.”

You can contact Blima Marcus and the other nurses involved at vaccinetaskforce@gmail.com.

#measles
#peach
#ultra-orthodox
#vaccinations
#original
Do you know the scoop? Comment below or Send us a Tip