In the seven months since Harvey Weinstein was led into Manhattan Criminal Court in handcuffs, his defense attorney Benjamin Brafman has been chipping away at the charges against the disgraced Hollywood mogul.

But Brafman’s court filings convey more than dry legal arguments to a judge. He's configured them to broadcast sex-charged allegations attacking the credibility or character of Weinstein's accusers—fully exploiting the mass-media megaphone Weinstein’s celebrity arms him with.

In the latest attack, for example, Brafman alleged that an unnamed third-party thought Weinstein and one of his accusers had been "hooking up." This was breathlessly reported by The Hollywood Reporter to be a fatal blow to the criminal case against Weinstein, while The New York Times called it part of a greater “unraveling.”

“They have the best lawyers, and privileged access to the media that they use to assassinate women’s characters, often criminalizing them,” she says. “And with today’s technology, their attacks can be broadcast exponentially in minutes, not just through traditional media but social media.”

For much of the 20th Century, rape was “virtually unprosecutable” in New York, according to an official 1986 report by the Task Force on Women in the Courts. This was because the law treated rape victims with suspicion—requiring those seeking justice to prove more than victims of any other crime.

Until 1974, for example, a woman’s word alone was legally insufficient to convict a man of rape: New York law required corroboration. In this way, the law treated women like criminal accomplices—another class of persons whose testimony by itself was not legally sufficient to convict.

Equally problematic was an “informal, though powerful, normative command” that women be “chaste,” according to Michelle J. Anderson, a rape law scholar currently Brooklyn College President. “Women heard the rules: If you want the criminal law to vindicate you after you are raped, you better have led an unsullied sexual life,” Anderson wrote in a 2002 law review article.

A wide-range of activities other than sex were found by American courts to make a woman “unchaste,” including drinking, smoking, using drugs, dressing provocatively, possessing condoms, traveling alone after dark and more, Anderson says.

“What we wanted was for the law to treat rape like any other crime. We wanted fairness, not special rules that made it almost impossible to convict a man of rape,” Berger told Gothamist.

“And we wanted to protect women from the kinds of free-for-all character attacks that discouraged other women from reporting rape. Women saw or knew other women who reported, who suffered more than the man.”

Besides eliminating the legal requirement for corroboration of a woman’s word, the Federal government and all 50 states enacted rape-shield laws. New York’s law, passed in 1975, bars defendants from submitting proof at trial of a victim’s “sexual conduct,” except in five specific circumstances, and only after a judge approves.

But the law only applies to trials, leaving Weinstein and other defendants free to launch character attacks on accusers, including allegations about sex-related conduct, before trial. 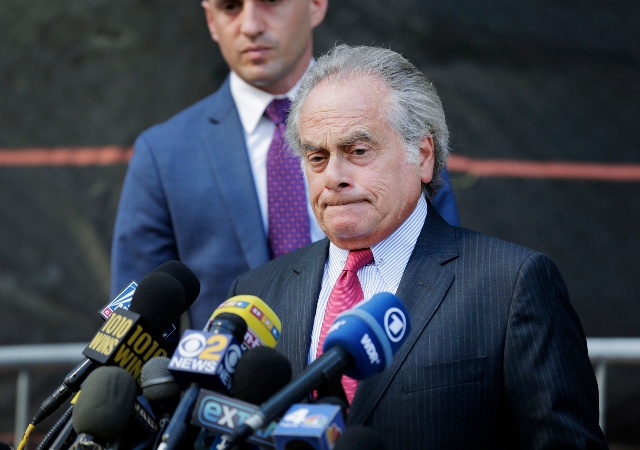 Weinstein was indicted for sexually assaulting three women, one of whom said he raped her in March 2013. That woman is the one alleged in Weinstein’s latest pre-trial court filing to have been “hooking up” with Weinstein.”

Another of Weinstein’s accusers is Lucia Evans. Evans told police Weinstein forced her to perform oral sex on him in 2004. (Though news organizations typically follow a voluntary practice of not naming victims of sexual assault, Evans publicly accused Weinstein in New York magazine.)

Evans was named by Brafman in a separate pre-trial filing. That filing alleged a different, unnamed witness told police Evans told her she performed oral sex on Weinstein in exchange for a movie role. The witness added Evans bared her breasts to Weinstein, the first time they met, in a bar, in exchange for money

Besides the real risk that they'll be discouraged from testifying at trial, the repeated attacks on Weinstein’s accusers chill other victims from reporting sex assault, according to Sonia Ossorio, President of the National Organization for Women New York City.

"When rape victims see what other victims go through, that discourages them from coming forward,” says Ossorio. “They figure it's not worth it.”

While one-in-five American women are raped during their lives, according to statistics compiled by the National Sexual Violence Research Center, only 37% of all rapes are reported to police; and out of every 100 reported rapes, only 12 result in conviction—just seven end in a prison sentence.

Los Angeles Lakers basketball star Kobe Bryant exploited a weak Colorado rape-shield law to defeat a rape charge there in 2003. Colorado's law, like New York’s, failed to cover pre-trial proceedings, allowing the likely Hall of Famer to repeatedly attack his 19-year-old accuser in the court of public opinion before trial.

Infamously, one of Bryant’s lawyers, Pamela Mackey, implied at Bryant’s preliminary hearing that the woman slept with three men in three days.

Ultimately, Bryant’s accuser decided not testify at trial; opting instead for a secret civil court settlement, that also gagged her.

Advocates for sex-assualt victims, however, blamed the collapse of the criminal case against Bryant squarely on Colorado’s weak rape-shield law. The law, they said, failed to protect Bryant’s accuser because it was a sieve instead of a shield.

Prosecutors asked one of Weinstein's accusers named in court documents as "Complainant two," to hand over “any and all cell phones” she used to communicate with Weinstein, according to court records. But the complainant balked, telling NYPD Detective Nicholas DiGaudio the devices contained not just communications with Weinstein, but other data “she regarded as private.”

Detective DiGaudio told the complainant to delete whatever she didn’t want anyone else to see. “Less is more,” he said, according to prosecutors.

In the end, the complainant surrendered her cell phones over without deleting anything, but Detective DiGaudio’s improvised attempt at assuaging her legitimate concern for her digital privacy gave Brafman an opening to argue evidence that could clear Weinstein was wrongly kept from the grand jury.

The judge overseeing the case agreed, and dismissed the charge.

Sexts can also fall outside the protection of current rape-shield laws, according to legal experts.

Colorado amended its rape-shield law in the wake of Bryant’s derailed prosecution, requiring all court filings and pre-trial proceedings where sex-related conduct of a victim is mentioned to be sealed and closed. Only if the conduct is ruled relevant by a judge, in private, is it then made public. All other disclosures are illegal.

New York’s rape-shield law has never been amended, but Manhattan Assemblywoman Linda Rosenthal has already proposed legislation to eliminate an exception that allows proof of prostitution convictions to be used against accusers—an example of the law’s institutionalized bias against “unchaste” women.

Now, Rosenthal says, she "will be working this session to enhance protections for all victims of sexual assault at the trial, pre-trial and investigatory phases of their case."

"We have seen these devious tactics play out in some of the most high-profile rape and sexual assault cases, including Kobe Bryant, Harvey Weinstein and Brett Kavanaugh," Rosenthal said in a statement to Gothamist.

"New York must do more to protect all current and future victims of sexual assault.”

Juda Engelmayer, a spokesperson for Brafman and Weinstein, said he didn’t think New York’s rape-shield law “comes to play at all.” The court filings, he added, “Do not delve into anyone’s prior relationships, and only deal with what occured between the two of them.”

#harvey weinstein
#rape shield law
#original
Do you know the scoop? Comment below or Send us a Tip