How NYC Got Its Skyline: A Q&A With The Author Of 'Building The Skyline'

Jason M. Barr is a professor of economics at Rutgers University-Newark and the author of the recent book Building the Skyline, a history of New York through the lens of the city's changing skyline. Last week, Gothamist spoke with Barr about how Manhattan became a vertical city, the role of geology in shaping the skyline, and affordable housing.

Why are New York's skyscrapers concentrated where they are? Lower Manhattan, I would argue, fits a standard mold in terms of skylines. If you compare lower Manhattan to Chicago, San Francisco, the hub in Boston, these are areas where a lot of skyscrapers emerged from the original commercial areas near the port. When European settlers came, they established ports by the rivers and by the bay. And over the years, as the cities grew, the amount of trading grew, and the amount of importing and exporting grew, these areas actually morphed into financial districts and corporate headquarter districts. So then by the end of the 19th century, these became bustling downtown areas. We saw a lot of skyscrapers being built there as a way of accommodating all of these businesses.

But the thing about midtown is that it doesn't really fit this mold. Most people assume, based on some comments by geologists over the years, that the reason that there are no skyscrapers in the Lower East Side, for example, has to do with the geological conditions there. And it's true that, geologically speaking, on face of it, it's not conducive to building down there. But when you start looking at the data and the evidence, the real reason that there are no skyscrapers north of City Hall was not because of the geology but because those areas were traditional immigrant enclaves, the tenement districts and the factory districts.

Midtown is a separate skyscraper district that emerged for a few reasons - one has to do with the narrow nature of Manhattan. After the introduction of the streetcar, and I call this the "first inversion" in my book, the upper classes started moving to the northern areas of the city. The northern areas of the city, in the 1840s, for example, was like 14th street. Midtown emerged as the population started moving north on the island. Madison Square became a retail, entertainment, and commercial hub to cater to the people that were moving north on the island. Basically, that area became the mall of Manhattan. And out of that commercial growth came skyscrapers in Midtown.

Because of the economic growth that was happening on Manhattan at the end of the 19th century, the population was being squeezed in this long and narrow kind of way, unlike Chicago or Boston, where there was ways for the population to grow and move outward in a more circular fashion.

The bedrock story gets a lot of play. People just sort of tell that story but it's not true.

Can you talk about how the Industrial Revolution enabled the creation of skyscrapers? The Industrial Revolution is both a cause for and an effect of skyscrapers. We live in a world dominated by technological change. A similar thing was happening in the second half of the 19th century, but obviously it was more based in physical materials. Railroads, telegraphs, the invention of steel and the Bessemer steel process - all of these things were allowing the American economy to grow very rapidly. They were improving the productivity of workers and their wages were rising. 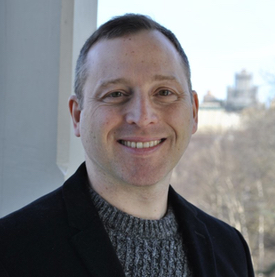 Jason Barr. (Courtesy of the author)

All of this growth needed to be coordinated and much of it was coordinated by lower Manhattan. Wall Street was financing much of the growth of this economy, the corporate headquarters were downtown. This created the demand for the skyscraper.

The pressure on land values and the pressure to build office space to accommodate all this business was really strong, again because lower Manhattan was so hemmed in. At that point, developers said, "What kind of products are being produced that can help us provide the real estate?" And that's where they started in the late 1880s, early 1890s, building tall buildings.

First it was iron and then steel framing. Steel allowed buildings to go pretty much as high as you wanted because of the strength of the steel. Also, elevator technology, which allowed people to move up and down very quickly, was important. The safety brake of the elevator was an important innovation because if people feared for their lives getting into an elevator, they wouldn't do so.

Historically, what factors have dictated height of the tallest buildings in the city? On average, they reflect the underlying economics, the supply and demand for building height, which is fundamentally based on the demand to be in the city and at a particular location. That's not to say every building is exactly the height it should be in a measure of optimality. There are some buildings that are too tall, from an economic point of view, either because of the desire for the developer to show off, or maybe to advertise, or to make a statement, or to offer some kind of symbolic gesture to the city or something like that. Those are only a small part of what determines the height.

Why are the majority of skyscrapers today used for the purpose of luxury apartments? What happened to office buildings? In terms of office buildings, it really comes down to this relative demand for types of buildings. In the first half of the 20th century, especially in the 1920s, the economy was booming and the demand for offices was huge. Then you have the Depression and World War II, which sort of put a stop on the demand for these buildings. Then after World War II, America and the city went through these sort of structural changes, where employment and big businesses were leaving the city - technology was allowing for decentralization, there was the rise of the Sun Belt. Since then, the employment of New York City has gone up and gone down, but there's never really been a kind of straight upward trajectory in the way that happened before the Great Depression.

The luxury condos are just reflecting the demand to live in and to hang out in New York City. Since New York's renaissance in the mid-1990s, it has retained its place as a cultural center, a high-life center, and a business center. All of these have drawn investment. So there's a tremendous demand to have space in a luxury building.

Then there's the whole other question about why is it just luxury buildings and not other buildings. Demand to live in New York City is so strong, but real estate policies constrict the amount that can be built. And the demand to pay top dollar for an apartment in a 60-story building is there.

What's the role of the skyscraper in the city's housing market? This question comes up a lot. I argue that the fundamental problem for the New York City housing market is the many policies that reduce the incentive to build middle-class/lower-income housing. Zoning policy is a part of it, rent stabilization is a part of it, general "not in my backyard" attitudes, and in some degree landmarking of buildings.

The current zoning regime we have now was implemented in 1961, when John F. Kennedy was president. Like rent stabilization. It came to us as rent control and was originally designed during World War II. This city is still working with real estate policies that have been implemented over a half a century ago. They tend to prevent the needed construction of more moderate-sized buildings, not just super-tall buildings, but maybe 10- or 15-story buildings, or even seven- or eight-story buildings. Seventy percent of the residential buildings in Manhattan are five stories or less. That's really the story about Manhattan's real estate market.

To get back to luxury condos, I would argue that they're more a result of gentrification than a cause of gentrification. The cause of gentrification is that more people want to live in New York City than can be accommodated by its current real estate stock. The city has to get serious about revamping regulations,and promoting and allowing for the construction of more moderate-sized houses. This would have to take place outside of Manhattan - that's just the way it is.

Gentrification is gonna continue. Why? Because many people with more money are just gonna keep moving into these neighborhoods they want to move into. But if there's no additional housing being built to accommodate this growing population, then it's basically a game of musical chairs. "I get what I can pay for and if you can't pay for it, then you're out of the game." It's really because of the restrictions on the supply side.

Building the Skyline is available from Amazon. Jason Barr will be discussing the book on Tuesday (11/29) at 7 p.m. at the Barnes and Noble in Park Slope.

#interviews
#skyline
#skyscrapers
#original
Do you know the scoop? Comment below or Send us a Tip