How NYC Can Solve Its Affordable Housing Crisis

How can New York City solve its shortage of affordable housing? Simple: Preserve the cheaper housing we already have, and build new housing that New Yorkers can actually afford. The problem is that the most effective ways the city can do that—strengthening rent regulations and building publicly funded housing—are currently illegal.

The city's rent stabilization and rent control laws limit rent increases for people who live in the apartments they cover, and also give them the right to stay there, as long as they pay their rent and don't have their band practice at 3 in the morning. But since the mid '90s, landlords have been able to deregulate vacant apartments if they could raise the rent high enough, first to $2,000 a month and now $2,500. This hits younger renters worst, as they weren't settled in before deregulation spread throughout the city.

At the very least, the city needs to close this loophole, and reregulate the more than 200,000 apartments that have been deregulated since 1997.

However, that would be illegal under a 1971 state law, the "Urstadt law," which prohibits cities "with a population of more than one million" from enacting stronger rent controls than the state's. That puts the city's rent laws in the hands of upstate and suburban legislators who take millions of dollars from city landlords, but can't be ousted by city voters. The state Senate is blatantly gerrymandered for Republican control, and although Democrats have captured a majority in two of the last three elections, they've been foiled by real estate-friendly factions splitting off to ally with the GOP. Repealing the Urstadt law is essential.

The state could also protect tenants against illegal rent increases by actually enforcing its laws against rent fraud. Common forms of abuse include landlords inflating the costs of renovations, failing to register the apartment's rent, and simply raising rents without any legal justification.

The state housing agency, Homes and Community Renewal, doesn't investigate an apartment's rent unless the tenant complains. That means the tenant has to know they have the right to complain, have some evidence they were overcharged, and be willing to spend a year or three fighting with their landlord. This is especially difficult for tenants who believe that their apartment was illegally deregulated, as their leases will likely expire before their case is resolved, and without the protections of rent stabilization, they don't have the right to renew them.

The agency could also change its enforcement tactics from passive to active, penalizing landlords for not registering rents and auditing major rent increases without waiting for a complaint, especially for owners who have a history of fraud. 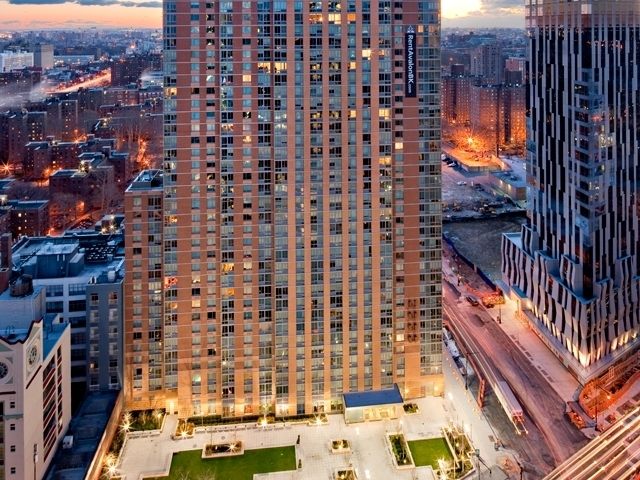 The Avalon Fort Greene, built with $22 million in tax abatements; studios start at $2,385 (via Avalon Communities)

The most effective way to create affordable housing would be to build it, but a Clinton-era federal law prohibits local governments from building any more public housing than they already have. New York City's public housing system, the largest in the country, has 180,000 apartments, and almost 250,000 people and families on the waiting list for them.

The other obstacle to building more public housing is financial. The New York City Housing Authority is so strapped it can't even make basic repairs, thanks to the city and state cutting off operating assistance over the last 15 years.

The money is out there. If we assume that building new housing costs $100,000 per unit, levying a $15 billion tax on the city's two richest residents, David Koch and Michael Bloomberg, would pay for 300,000 apartments, enough to house all 53,000 homeless people, everyone on the NYCHA waiting list, and then some—and still leave the two multibillionaires among the nation's 25 richest people, ahead of Michael Dell, Paul Allen, and Rupert Murdoch.

That kind of expropriation is unlikely to happen short of a socialist revolution, but a 10-percentage point tax increase on New Yorkers who make more than $10 million a year would bring in a similar sum over the next decade.

New York could also build nonprofit co-ops financed by labor unions, like Penn South in Manhattan and Electchester in Queens, or revive the state's Mitchell-Lama program, which gave developers tax breaks for building housing that working- and middle-class people could afford. Mitchell-Lama created more than 120,000 such apartments from 1955 to the mid 1970s. At Penn South, buying a two-bedroom apartment costs around $90,000, with maintenance around $835 a month. (You need to win a lottery to get on the waiting list.)

The obstacle here is that building such developments requires large and relatively cheap (i.e. below market price) plots of land. Also, the Mitchell-Lama program offered landlords a slow, steady profit, a weak incentive in the post-1980 market. Several firms even specialize in buying Mitchell-Lama units and taking them out of the program. 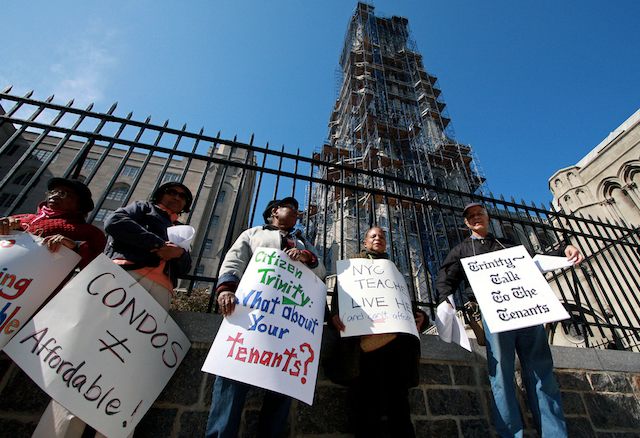 All this leaves the city with few immediate options beyond a liberal version of trickle-down economics: giving tax and zoning breaks to luxury development in exchange for including up to 20 percent of supposedly affordable apartments in their buildings.

Mayor Bill de Blasio's housing program, scheduled to be announced May 1st, is likely to focus on increasing this trickle, by using mandatory inclusionary zoning to require a larger percentage of affordable units, and by using lower incomes to define "affordable." (Former mayor Michael Bloomberg's program built more "affordable" apartments for people who made more than $100,000 a year than for people who make less than $33,000.)

The Real Affordability For All coalition, an alliance of city housing and community organizations, has urged the city to require that at least half the apartments in tax-subsidized new buildings be affordable.

In higher-cost areas, particularly Manhattan, half could be reserved for low-income households, $24,000 to $48,000 for a family of four. In the outer boroughs and upper Manhattan, apartments would be split 50-50 between low-income households and those making up to around $80,000. (The city's 421a program, a '70s-vintage tax break intended to encourage construction, is notorious for subsidizing luxury housing: The Avalon Fort Greene, a downtown Brooklyn building that opened in 2009, got $22 million in tax abatements. Studios there currently start at $2,385.)

The coalition has also urged putting more money into sustaining public housing; promoting nonprofit development; subsidizing rents for low-wage workers; allowing taller buildings on undeveloped land in low-income neighborhoods like East New York and the South Bronx; and giving low-cost loans and tax incentives to help owners maintain their properties if they keep rents down. Tomorrow the group is rallying on the steps of City Hall at noon to push the mayor to adopt their proposals.

All these measures would be helpful, but much more is needed to reverse more than 40 years worth of damage. Turning that tide will require taking on the city and state's most powerful political and economic interests and rejecting the ideology that a Russian billionaire's investment is more important than a health-care aide raising their family in Flatbush.

Steven Wishnia is a New York-based journalist and musician, and the editor of Tenant/Inquilino. He is also the author of "When the Drumming Stops," "Exit 25 Utopia," and "The Cannabis Companion." His previous work for Gothamist includes "Why The Push To Abolish Rent Control Is Stupid And Irresponsible"

#affordable housing
#bill de blasio
#mandatory exclusionary zoning
#Mitchell-Llama
#longform
#original
Do you know the scoop? Comment below or Send us a Tip