The hand-soap dispensers in City Hall bathrooms and “Secure Therapy Desks” used to shackle prisoners during class on Rikers Island are just a few of the products made by incarcerated New Yorkers, who earn as little as 16 cents an hour in a $50 million-a-year industry.

The business is called Corcraft, described on its website as “the ‘brand name’ for the Division of Correctional Industries,” operated by the state Department of Corrections and Community Supervision, known as DOCCS. While Corcraft’s operations are largely hidden behind prison walls, a 2014 DOCCS report says Corcraft “employs approximately 2,100 inmates and 288 civilians in 14 facilities across the state.”

Corcraft averages around $48 million in sales annually, according to the 2014 DOCCS report, a figure confirmed by an independent state comptroller report. Revenue from sales goes into the state general fund.

According to DOCCS’ spokesperson Patrick J. Bailey, the “average Corcraft inmate wage during FY15-16 was 65 cents an hour or about $1,092 per inmate per year.” The lowest Corcraft wage is 16 cents per hour, though some can earn bonuses equal to $1.14 per hour.

At these rates, “Prison labor is prison slave labor,” charges Alex Friedmann, managing editor of Prison Legal News and associate director of the Human Rights Defense Center, a prisoners’ rights advocacy group. “Know anyone else who would work for 65 cents an hour?”

Friedmann says that “if you don't like the term ‘slave labor,’ then prisoners should be paid a fair wage for their work.”

Besides the desks and the soap dispensers, Corcraft manufactures a wide-range of institutional products, such as state license plates, soap, street signs, janitorial supplies, metal crowd-control barricades used by the NYPD, wooden benches used throughout the state court system, and office furniture, including the “Attica Series Desk”—an office desk named after the notorious prison, which has a sheet-metal fabrication factory behind its walls.

State law requires local governments to purchase commodities from Corcraft if it has a product that satisfies the form, function and utility required. The law, in effect, gives Corcraft monopoly-like power over the state-wide municipal institution market because the law exempts Corcraft from another state law mandating competitive bidding.

According to Bailey, New York City is the largest single purchaser of Corcraft products. Cathy Hanson, a spokesperson for the Department of Citywide Services (the city agency responsible for keeping city agencies supplied), tells Gothamist that this fiscal year New York spent more than $15 million on Corcraft items.

Doug Turetsky and his colleagues at the Independent Budget Office provided a detailed accounting of city purchases dating back to March 2013, totaling around $41 million.

According to Turetsky, at least 26 city agencies have purchased Corcraft products. “The purchases ranged from shelves to office furniture to crowd control barriers,” Turetsky says, and also include something identified as “no competition lockers,” file cabinets for an elementary school, coastal storm signs and an ergonomic chair ordered just last month—by the comptroller’s office—for $1,017.00.

In addition to the comptroller’s office, one other elected city office made purchases from Corcraft: “The mayorality,” according to the IBO’s accounting, purchased $139,812.26 worth of office furniture since 2013.

A spokesperson for Scott Stringer, the New York City Comptroller, declined to detail the city’s business with Corcraft. 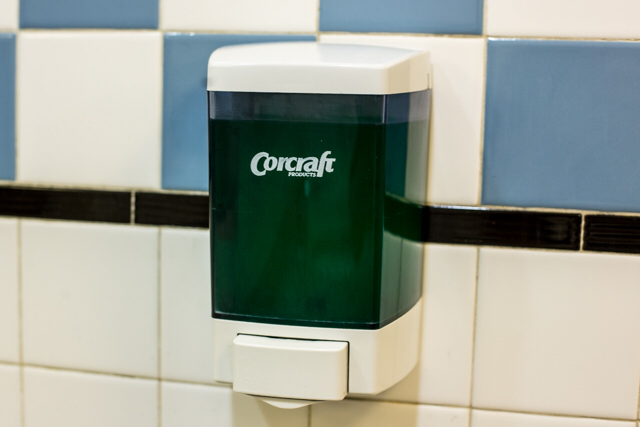 While the Constitution’s 13th Amendment proscribes slavery and involuntary servitude, it contains a loophole: “Except as a punishment for crime whereof the party shall have been duly convicted.”

Consequently, says David C. Fathi, Director of the ACLU’s National Prison Project, “Convicted prisoners can be forced to work for any or no amount of money, and they can be disciplined for refusing to work.” Prisoners are not allowed to form unions, Fathi added, and neither are they protected by federal or state minimum-wage laws. Nor do prisoners have a right to workers’ compensation if they are injured on the job.

In New York, prisoners are required to “participate in programs as assigned,” including “vocational programs, industrial programs, and maintenance work assignments in any combination.” Refusal to obey an order to work is a violation of prison rules, as is union organizing and action. Both are punishable by solitary confinement and loss of good-time credits.

“Given the lack of legal protection and the vast power differential between prisoners and their employers, there is a real potential for exploitation and abuse,” Fathi says.

For example, Fathi adds, “prisoners have been killed fighting fires in California and Arizona and perhaps other places.”

Heather Ann Thompson is a University of Michigan history professor who studies prisons, and is the recipient of the 2017 Pulitzer Prize in History for her book on the Attica rebellion, Blood in the Water. Thompson says compulsory prison labor is an “institutional descendant of slavery.”

In 2010 when the Syracuse Post-Standard visited New York’s maximum-security prison in Auburn to report on Corcraft’s license plate franchise, one prisoner working on the assembly line “called out that working on the line is ‘slave labor.’”

The practice of requiring prisoners to work, Thompson explained, traces back through the Black Codes that Southern states enacted after the Civil War and the racist convict-lease system that ensued—which resulted in some former slaves being rented back to their former masters. In 1871, for example, the Supreme Court of Virginia, in Ruffin v. Commonwealth, referred to prisoners as “slaves of the state.”

Today, Thompson says, “the problem here is not labor per se. Prisoners want to work. The problem is exploitation. If in fact they were paying a real wage, and if people were learning an employable skill, we could have a conversation.”

Chandra Bozelko, who was incarcerated in Connecticut for more than six years, and works today as a journalist, believes comparisons between compulsory prison labor and slavery are wrong-headed.

“I was grateful for my job,” Bozelko says. “Even though it was manual labor, it gave me some respite from the unrelenting sameness of sitting idly in a cell. I learned humility and responsibility. People who rail against prison labor and offer group therapy or more classes as alternatives are out of touch, not only with prison life, but with reality.”

Still, Bozelko conceded, “as currently practiced with low wages, it is inherently unfair.”

Governor Andrew Cuomo has the power to raise prisoners’ wages, either through executive action or the budget process.

Asked whether the governor supports raising wages for Corcraft workers, his press office did not respond.

The last time New York’s prisoners were given a pay raise was in 1993, when Governor Cuomo’s father, Mario, was the governor.

DOCCS’ director of public information, Thomas Mailey, says that the inmate labor program “is designed to provide meaningful skills to inmates and provide successful reentry to the community as a performance measure.”

“For someone to insinuate that this is anything other than a rehabilitation program, it simply illustrates their fundamental misunderstanding of the correctional system,” he added.

Going forward, Fathi, the ACLU’s National Prison Project director, says that “prison administrators can do a lot to ensure better conditions for those who work inside prisons.”

“But it’s really up to lawmakers to recognize that incarcerated workers should be protected by the same legal rights as all other workers.”

#corcraft
#governor cuomo
#new york prisons
#prison labor
#slave labor
#original
Do you know the scoop? Comment below or Send us a Tip