New York City’s building boom has created a raft of tensions across many of its neighborhoods, spurring concerns about affordability, gentrification and increasing density. But in and around waterfront areas, where residential development is flourishing, new construction is confronting a bitter environmental reality: that more buildings exacerbate street flooding.

According to Klaus Jacob, a climate scientist and the city's resident doomsayer, the problem is caused by a confluence of factors.

For one thing, densification, particularly in the form of high-rises, creates more impermeable surfaces. More than 70 percent of the city is made up of impermeable surfaces, according to the city. “So that means there is more intense run-off and therefore the water accumulates from the streets and into the gutters,” he said.

Which leads to the issue of the infrastructure: many of the city’s street gutters are decades-old and unable to handle such heavy flows. Throw in the occasional garbage bag or similar clogging debris and you have a situation that requires the heroic and common-sense intervention of a good Samaritan.

The problem is also underground — during a recent storm, the MTA pointed to “a nearby private development worksite” which had so much water build-up that it eventually breached the plywood separating it from the Court Square subway station, leading to a flash flood on the platform. The project, Skyline Tower, did not have a proper pumping system in place to serve as a temporary drainage system, according to the MTA. The 964-foot condo tower is set be the tallest in Queens.

And then, of course, there's climate change, which has given way to more frequent and shorter so-called "cloud bursts," intense downpours like the one on Monday, where several sections of the city got roughly three or more inches of rain in a relatively short period of time.

“That all contributes to street flooding,” he said.

Following Monday’s deluge, critics of the city’s rezoning plan in Gowanus, whose toxic canal has historically flooded during heavy rains and is currently the site of a Superfund cleanup, immediately pointed to the havoc the rain wreaked both in and around the neighborhood. In one particularly dramatic image, Carroll Street, which sits west of Gowanus, had turned into a full-fledged river.

This is why land use is so important and the community concerns around the Gowanus rezoning need to be taken seriously!

Building 20 story luxury towers in zone 1 and 2 emergency flood zones is beyond reckless it is dangerous as this happens in the zone's 3,4, and 5 a block away! https://t.co/J3BkWyjFWL

Gowanus is by no means the only city neighborhood affected by heavy flooding, but the discussion of how development impacts the built environment has crescendoed there in large part because the proposed rezoning would usher in a wave of new construction. Under the city’s plan, which is still in the environmental impact assessment phase, there would be 60 potential development sites, many of them along the canal.

“It’s not cut and dry,” said Andrea Parker, the executive director of Gowanus Canal Conservancy. “I think we are going to see increased street flooding with climate change. The ground water is rising. Whether or not there’s more development, there’s going to be more flooding."

But she added: "The question is whether the city acknowledges that and requires developers to build differently.”

For Parker, building differently means addressing existing environmental problems—from street flooding to sustainability to environmental injustice faced by low-income residents like those in public housing— and then checking in from time to time to anticipate future ones. On the city planning side, there are a host of considerations: What should developers be required to do to mitigate the impact of their buildings? What kind of infrastructure should the city build around those new developments? How much should developers be required to pay to finance those improvements?

She pointed to development in Atlantic Yards and Downtown Brooklyn as examples of narrow and short-sighted planning. On rainy days, she said, all of the run-off and sewage winds up flowing into the Gowanus Canal.

And while the city is currently building a retention system in Gowanus to handle the sewage overflow, a project that will take several years and may end up costing more than $1 billion, Parker said the plan only accounts for the current overflow, not the amount that would be produced by new development.

The mayor's office did not respond to a request for interview.

Instead, a city Planning spokesperson emailed Gothamist the following statement: “DCP is working with DEP, the Gowanus community and federal officials to ensure sewer and infrastructure needs are met as the neighborhood grows. Our careful environmental analysis is underway, and it will be shared with the community once it’s complete.”

According to the city Planning, property owners cannot be forced to remediate without a change in zoning or new construction. The department has also created a waterfront access plan that would ensure flood resiliency for new development.

But among the primary touted benefits of the Gowanus rezoning plan has been the dent it would make in the city's housing crisis: all told, the city is estimating the creation of some 8,200 new apartments, 3,000 of which would be permanently affordable, by 2035.

In the wake of Monday's storm, other city officials pushed back against the criticism on new development. City Council member Brad Lander argued that because of its unfortunate topography, neighborhoods like Park Slope have historically suffered from flooding issues.

Totally agree there must be a full CSO mitigation plan as part of any rezoning. New development in Gowanus must not pollute the canal. But tonight’s flash flood was because rainwater overwhelmed the storm sewers. Nothing to do with the size of the buildings.

Edward Timbers, a spokesperson with the city’s Department of Environmental Protection, said that New York has in fact been working to “soften” the urban landscape so that storm water can be naturally absorbed into the ground. He cited the construction of 4,000 rain gardens, as well as recently introduced building code requirements for new and redeveloped buildings to dampen the impact of runoff by using green roofs, which absorb water, or blue roofs, which contain it. Under the rules, developers must manage at least 90 percent of the storm water that affects their projects.

“Theoretically if you have a parking lot or old building and no green space and you replace it with a new building, it is keeping more water out of the sewer system,” he argued.

Klaus, however, described the city’s new building code requirements for green infrastructure as “only a partial relief.”

“Any new construction still makes the situation worse,” he said. 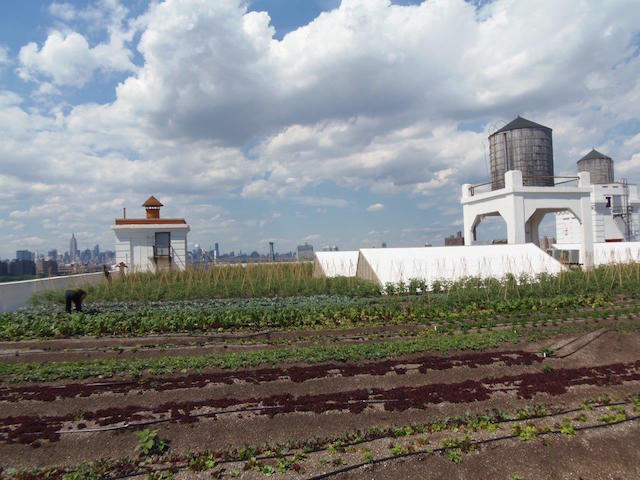 The green roof atop the Brooklyn Navy Yard. (Photo courtesy of DEP)

Alan Cohn, who specializes in sustainable water management for the DEP, said the city has drawn lessons from Copenhagen, which in response to $1 billion worth of flooding damage from a cloud burst in 2011 developed a network of green infrastructure.

The strategy, which Cohn described as "the first line of defense," involves using above-ground solutions of diverting and then holding water until it can drain safely. As part of a pilot project, the city is building a drainage system at a public housing complex in South Jamaica which directs water to a basketball court.

But even he confessed that the city's green infrastructure can't entirely mitigate the kind of extreme events like the one on Monday.

Jacob said he sees the city as offering up "piecemeal solutions" rather than coming up with a broad-based plan that demands coordination between a wide swath of city agencies: the DEP, City Planning, the Department of Buildings, the Department of Transportation, and the MTA.

Under this kind of "master plan" approach, the city would coordinate its strategy with new development, he said.

Until then, more New Yorkers may be headed for the kind of experience Brett Williams had on Monday. Following a soggy commute, the 28-year-old Men's Health editor arrived at his two-bedroom garden apartment in Crown Heights. As he walked into his bedroom he heard a swishing sound below him. Turned out, the room was completely waterlogged.

Don't worry y'all I went home to a flooded bedroom too so I am become sludge rainwater pic.twitter.com/Fyuq2rbz1z

He attributed the problem to poor drainage. Since the spring, he and his roommate had experienced flooding issues in the front of the apartment. But this was the first time water had reached the back.

Like many others that day, Williams felt both amazed and frustrated. How could the city, with its gilded skyline financed by the 1 percent, buckle so easily in the face of Mother Nature? “Clearly the powers that be have no concern for the actual residents and tenants that live in New York," he said. "Our city is richer than it’s ever been but the infrastructure is crumbling.”

Update: The story has been updated with a statement and background information from the Department of City Planning.

#climate change
#development
#flooding
#Gowanus
#rezoning
#original
Do you know the scoop? Comment below or Send us a Tip