How Late is Too Late for Atlantic Yards Construction?

We noticed two YouTube videos, taken from an apartment with a view of Dean Street, documenting some late night construction activity at the Atlantic Yards site in downtown Brooklyn. How late? Well, one video takes place at 11:42PM (video) while the other is in the 4AM hour (above!). For reference, according to 311, construction hours are generally 7AM to 6PM on weekdays (there may be emergency work in the middle of the night, but only on occasion; we also know some contractors get variances and conduct work late at night).

It turns out the video was taken by Daniel Goldstein, spokesman for anti-Atlantic Yards organization Develop Don't Destroy Brooklyn. Goldstein, who lives in the footprint of the massive plan (and who has documented the de-construction before), tells us that the construction activity has been taking place for many weeks. 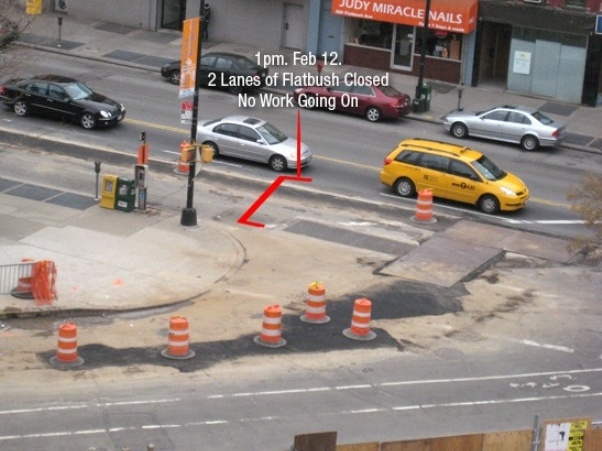 He has been told by Atlantic Yards developer Forest City Ratner that construction has to take place in the middle of the night because the Department of Transportation doesn't want to stop traffic on Flatbush. However, the two lanes of Flatbush that are closed overnight remain closed during the day - with no work going on.

Goldstein also finds it curious that when the Empire State Development Corporation's Environmental Impact Statement conducted a noise study for the area (PDF of the construction chapter), the study only focused on impact between 7AM and 11PM - not during the overnight hours. Of course, the much-criticized EIS had assumed everyone would be out of the footprint by the time construction started.

Goldstein and his neighbors are in the process of trying to get answers from Brooklyn Borough President Marty Markowitz and other city agencies.