How Koch is Doing With His Endorsement of Obama 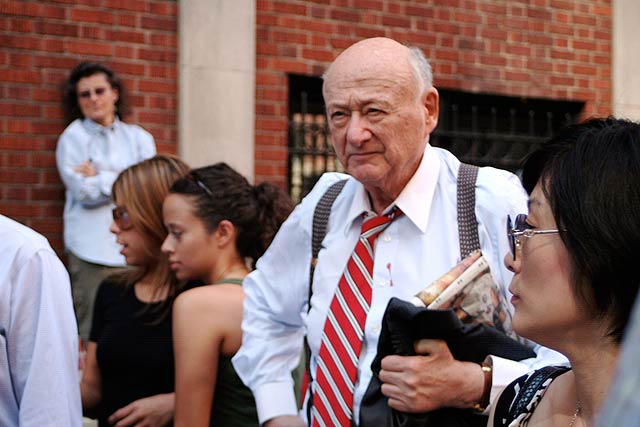 After Ed Koch said he was supporting Barack Obama for president because Sarah Palin scares him, Koch has been hearing from some of the folks who subscribe to his commentary via e-mail. The former mayor shared some of the missives he received--plus replies he's sending--with the NY Times(which incidentally is one of Koch's most trusted news sources!).

While most of the 400-some e-mails were positive, but the ones who disagreed with Koch's position were really...intense. Koch explained, "I was surprised primarily by those who criticized me with the invective they used, but I know those who praised me, had I come out the other way, would have used the same invective.” Per the Times, here are some excerpts of e-mails and, in italics, Koch's replies.

“Though I could not disagree with you more on your backing of George W. Bush, I congratulate you on your choice this time around.”

“Isn’t it possible that both my choices were and are correct? History will make that judgment.”

“No one believes you are really endorsing Obama out of a sincere belief that he is the better candidate after you endorsed Bush in ’04.”

“How foolish of you. ... The fact that I exercised independence of my party then is surely relevant and establishes that I vote my conscience.”

“If you feel Obama is the right man, with zero experience, anti-American stands, I no longer wish to receive your insights.”

“Removed from e-mail with pleasure and alacrity.”

“You are kinder to Sarah Palin than I would be — I’ve never thought that disemboweling a moose was a strong qualification for a would-be president.”

“I have no problem with Palin being an expert on skinning a moose and turning it into stew. I have a problem with her breaking tie votes in the Senate.”

Here is Koch's explanation of why he's supporting Obama-Biden.