How I Explained Trump's Win To My 6-Year-Old Daughter Yesterday, I was exhilarated by the voter turnout I saw in my Manhattan neighborhood. I hadn't seen lines this long in 2008 or 2012, and when a woman asked how long the wait was, a few of us guessed maybe 15-20 minutes (it was actually 30 minutes) and I added, "It's worth it!" She looked at me and brightened, "It is!"

And it was—I took my 6-year-old daughter to cast a vote for Hillary Clinton, the first female candidate for president. I hoped that we could make history, and hoped that I could share in, yes, a tough working mother's belief in the "boundless confidence in America’s promise" where women aren't judged on their looks and no one is judged by their skin color or religion or accents... I could go on.

I think a lot of other parents in New York had the same optimism, especially the ones who brought their children to the big block party at President and Clinton Streets in Cobble Hill last night. Our photographer Gretchen Robinette was there, marveling at the packed streets (she estimated a few hundred were there at one point).

"Everyone started out with happy faces and cheering, then turned to sadness and fear," she said, and then at 10 p.m., when the permit for the party ended, so did the gathering "with absolute sadness and silence." 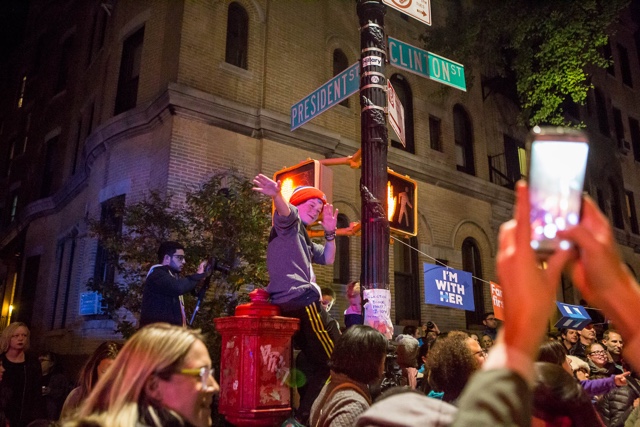 My husband and I let our daughter Katie stay up to watch some of the returns. She even played with the maps on 270 To Win before going to bed a little after 9 p.m. I watched the returns come in, going from unease and agitation to sorrow and weeping. Then I realized, shit, we're going to have to tell our daughter in a few hours... and, SHIT, what about all the other kids in her school, especially the ones who have been targeted by Trump's rhetoric? Children her age have talked about Trump making non-white kids go back to their countries, while other classmates said they were afraid their parents would have to leave, leaving them behind because they are U.S. citizens.

my 8 year old asked if president trump once shoved his hand down a ladies pants & laughed about it. she heard about it at school. i froze

After barely two and a half hours of sleep—and the realization that I should try not to cry when telling her—we went to Katie's room at 6:15 a.m. She wanted to tell us how one of our cats sounds like an alien, not a feline. I pulled her into my lap and said, "So, I have to tell you something: Donald Trump got more votes than Hillary Clinton, so he's our president."

Her face dropped. "What happened?" she asked, and I did my best to try to explain that a lot of people voted, and that while New York City was for Hillary, Trump won in many more places.

"But isn't Trump bad?" she asked, because she definitely heard TV news reports as well as our own discussions about Trump's consistently abhorrent behavior (we turned off the groping stuff, but everything about immigrants, how he loves bullying people and mocking the vulnerable, etc., was fair game).

I sighed. "Well, last night, Donald Trump said that he wanted to be a president for everybody, to help everybody have a better life."

My kids will be up any minute and I'm struggling to put on a brave face. How do I tell them a man they know to be hateful is now president?

My husband tried to explain how this was like a sports game (if only!) and her side lost. I continued, "There were so many votes, so no matter who won, there would be a lot of people who would be disappointed."

"Well, I think that while we and a lot of other people believed in her ideas, there were many people who thought Donald Trump had better ideas"—though not really—"so he is the president now. What we can do is hope that he can help everybody."

"Well, I hope this is the worst day of your life," I said.

"Because we're healthy—and we're all together. Think about how much worse it would be if someone you knew and loved died. So I hope this is the worst day of your life."

My wife's guidance to our despondent kids this morning: "Be informed. Speak up for what is right. Be good to people."

Katie nodded and became distracted by her toys. But then she asked, "Can you tell me that thing that Donald Trump said again?"

"Do you mean how he wants to be a president for everybody, to help all of us?"

"Yes." She was thoughtful and exclaimed, "It'll be okay because he wouldn't lie about that!"

My heart broke for her innocence. I hope she's right and that we'll all get through this.

--> @RyanLizza: "I think it's important to take him at his word... As journalists, we should listen to what he said... Believe him."

#donald trump
#election 2016
#hillary clinton
#personal
Do you know the scoop? Comment below or Send us a Tip
A new Gothamist is coming! We’ve moved comments over to our beta site. Click here to join the conversation and get a preview of our new website.