How Far Would You Go to Beat a Parking Ticket? 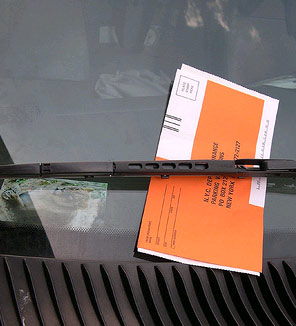 No one likes getting a parking ticket, but it's those instances when tickets are handed down unfairly that really make people crazy and determined to beat them. Sanford Young, a lawyer, spent two years and an estimated $10,000 to beat a $65 ticket in Manhattan Supreme Court. From The Post:

The summons charged him with violating the weekday no-parking rule between 4 p.m. and 7 p.m., and "noted the time of the offense as 6:59 p.m.," the judge's decision says.

The summons especially ticketed Young off because he made sure he didn't park until after 7.

He entered a plea of not guilty on the Parking Violation Bureau's Web site. He called the ticket "absurd and wrong," and said that as "lifelong New Yorker and lawyer," he knew when he could park.

While the city offered to reduce the fine to $43, Young refused and took it to court, was found guilty, appealed, lost the appeal, and then took it to the Supreme Court, where a judge ordered that the city had to pay him back his $65. The $10,000 calculation comes from Young estimating the time he spent and what he bills actual clients.

Various parking ticket trivia we've accumulated: The Independent Budget Office says you have a better chance of beating your parking ticket in person. One person used Google Maps to have his parking ticket thrown out. If you go in person, parking judge Barry Popik recommends that you tell the honest truth and don't play games with the judge. And another commenter suggested you write to a local city official: "if you feel aggrieved, then write to the mayor, your city councilman or any other public official about it. You'd be surprised at how sensitive the city is about negative press. You might get an apology letter and a refund!"