How Do Borough Presidents Fill the Empty Hours? 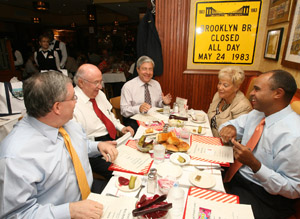 Are the city's borough presidents just a bunch of lazy, pampered functionaries who draw a $160,000-a-year salary to show up for photo ops and issue proclamations? After reviewing the schedules for all five presidents during the week of August 4th, the Post seems to have arrived at that conclusion. The tabloid is shocked to find that the job of borough president turns out to be largely ceremonial, with a week in the life filled with such duties as attending a Liza Minelli concert (Brooklyn's Marty Markowitz), a party for Hillary Clinton at Cipriani (the Bronx's Adolfo Carrión), and a staff meeting on replacing a disabled constituent's stolen scooter (Staten Island's James Molinaro).

Carrión spent 2½ hours having "private" time on Monday and an hour of the same on Thursday..."He can be known to disappear," said a source close to Carrión...Queens Borough President Helen Marshall also had lots of time missing from her schedule. On Aug. 5, she attended Gov. Paterson's signing of a bill about home foreclosures at 10:30 a.m., then went to a National Night Out Against Crime event at 6 p.m. Nothing was listed in between. "She could definitely do more with that position," said a Queens democratic insider.

Molinaro, in his defense, tells the Post, "I get hundreds of phone calls a month from constituents. I read every piece of mail that comes into Borough Hall. I'm not exaggerating. And I call many of these people. Who else is going to do that? You think some bureaucrat is doing this?"

In 1989, the presidents lost their most significant power, appointing members to the since-disbanded city Board of Estimate. Now some critics would like to further diminish their roles when the Charter Revision Commission revises the city's charter. Meanwhile, the Daily News is raising questions about $680,496 in no-bid city contracts that Markowitz awarded to the nonprofit he runs, Best of Brooklyn Inc. In speaking to the News, Markowitz insisted it would be impractical to competitively bid each contract: "By the time we put it out to bid, we couldn't get anything done."

Photo of the borough presidents have a laugh during lunch at Junior's courtesy Kathryn Kirk.

#borough president
#daily lives
#marty markowitz
#new york city
#nyc
#schedules
Do you know the scoop? Comment below or Send us a Tip
A new Gothamist is coming! We’ve moved comments over to our beta site. Click here to join the conversation and get a preview of our new website.