Yesterday we spoke with two investigative journalists renowned for their longstanding coverage of corruption in New York City: Tom Robbins and Wayne Barrett, who both left the Village Voice simultaneously in 2011. (Barrett was laid off and Robbins quit in solidarity.)

Barrett, who co-authored the book City for Sale: Ed Koch and the Betrayal of New Yorkwith Jack Newfield, is currently a Nation Institute Fellow who contributes to the Daily Beast and Mother Jones. In a phone conversation, we asked him for his thoughts on the Koch administration:

"Newfield and I covered the scandals of the late '80s that made headlines in the very beginning of Koch's third term. But the seeds were sown through the first and second terms. And the seeds of the scandal were really his responsibility—a responsibility he never really owned up to. No one would accuse him of personally profiting in any way from the corruption in his administration—at least we never did.
He put it in place, at the behest of the corrupt party bosses that supported him both in elections and on the board of estimate and in the city council where party bosses had influence. They supported him when he ran for mayor and they supported him when he ran for governor. Those party bosses were corrupt. There was every reason for Koch to know that. Many people around them very close to them had gone to jail. 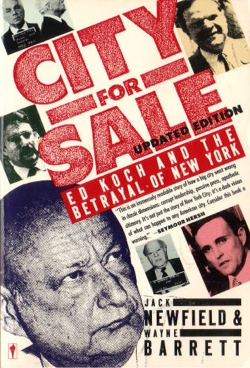 "But it isn't just that this happened on his watch; he wasn't an innocent bystander. He brought down Carmine De Sapio, so he understood that Meade Esposito was the inheritor of the DeSapio tradition. In fact they were extremely close. And yet he got into bed with corrupt party bosses who could help make him mayor and help keep him there. He thought they could make them governor. And the price was that he gave certain agencies—obscure agencies to the public, not the police department—but the PVB... I mean Meade Esposito, one of his right-hand men, was installed at the head of the city's office of leasing. Why did he think Meade Esposito wanted to control city leases worth hundreds of millions of dollars? Why was that what Meade wanted to have in his back pocket? I don't think the mayor was fooled.

"Certainly that's the theme of City For Sale: that Koch parceled out pieces of his government to these guys and looked the other way. There's no question it was a giant municipal sin and the worst municipal scandal of modern times. I think he paid a price for it; Koch never admitted that it contributed to his defeat in '89 but I believe it did. I think he transcended it in many ways. He had such a successful post-mayoral life and he had many successes as mayor. But this was such a dark side that he said himself he seriously contemplated suicide after Donald [Manes] killed himself. So there was a moment in time when he came to grips with the shame of it. But he never really publicly acknowledged what he did that was wrong that contributed to this."

Tom Robbins, who teaches at CUNY's Graduate School of Journalism and freelances for the NY Times and elsewhere, had a bit more time to talk yesterday. He held forth at length at what he sees as the dark side of the Koch legacy in New York City:

"I think the dominant Ed Koch story will be that he was this feisty swaggering mayor who pulled the city out of dark days with his spunk and his spark and turned things around. There's a good part of that that's true, but there's also a guy who I think made part of the city much darker. And that's not going to show up in too many summations of his life.

"But one of the things that strikes me about Koch's passing is that his era is when New York really started to divide between the haves and the have-nots. That's what I trace it back to. At that time I was just starting out in Journalism and I remember the summer of '77 and that fabulous campaign, but what stands out to me most in terms of the actual campaign was Ed Koch and his death chant. And how strident that was! And how jarring it was that he made a campaign based around the fact that he was for the death penalty in a pack of Democrats who opposed it.

"A lot of people applauded that. It was the summer of the Son of Sam, people were being killed by some mysterious killer, there were riots after the blackout. He capitalized on that. And that's really how he won: he came out narrowly ahead in the initial primary, then edged out Mario Cuomo in the runoff. But that was the Ed Koch who took office and he really spent the first two terms pumping up those parts of New York that he thought were the ones that needed attention. And that was not poor folks or even lower income folks, it was business and real estate.

"All the credit that he's being rightfully given today for having started this large housing program in his last term omits the fact that in his first two terms he did nothing of the sort. Homelessness, for the first time, became a huge phenomenon on the streets of New York. He wasn't necessarily responsible for all that, but that's really when the specter of homeless families on the streets of New York suddenly became something people confronted. And he did nothing about it for the first two terms.

"He spent two terms expanding tax giveaways to developers—every study found didn't need them—and it wasn't until after he allowed real cutthroat landlords and owners of single room occupancy hotels on the Upper West Side to run rampant. We used to attend these press conferences at City Hall where people would ask, 'What about this landlord who was just locked up for hiring a gang to drive people out of the hotel?' And Koch would always insist that these were one-of-a-kind episodes and his administration was on top of it. But in fact it was sort of a green light given that these was the way that neighborhoods were going to change. So that's kind of the New York that got darker before it got lighter."

Gothamist: It's interesting because he really saw himself as a middle class guy and a defender of the middle class in New York City.

"I think that his definition of middle class was something that did not include a large portion of New York. I think that there are people who took heart from his aggressive, feisty daily shout-outs that he would give to the city. There were people who appreciated his resiliency and that part was good for the city.

"But I think there was a huge number of New Yorkers who were simply left out of that equation. And the problem is that we've never really gotten them back in. I've seen that gap between rich and poor just widen ever since. Apart from a sort of half-hearted effort under four years of David Dinkins, there hasn't been a mayor since then who has really tried to bring us together. And I think that the vision really started to escalate under Ed Koch. Because he'd say things he knew were offensive to blacks, to poor people. He would claim that he was representing all of New York but he was really only catering to one portion of it.

"There are other things. He hired some terrific people but for some reason he also hired terrible hacks. And he advocated for some of the worst things in New York. It was under Ed Koch's campaigns for mayor that we saw campaign contributions just go through the roof. You used to sit down and go through these filings and see thirty different corporations owned by Donald and Fred Trump, Donald's father, from addresses on Coney Island Avenue, each one worth $25,000 a piece. And there was no cap on it. It wasn't until Mario Cuomo was governor and he appointed a commission on integrity and government, that there was any kind of effort to reign this in.

"After Koch got into trouble at the beginning of his third term he rightfully recognized that he needed to do something. So one of the great things he did was help create the campaign finance law. So I think we got a good thing that did measurable good to the city out of some very bad behavior from Koch and some other politicians."