How Carlos Danger's Weiner "Becomes A Problem" For Spitzer

Yesterday, former congressman Anthony Weiner's surprisingly strong mayoral campaign got socked with new sexting allegations—which he later confirmed were mostly true. During a press conference, he emphasized, "This is entirely behind me. That is why if you remember the early days of the campaign, people were pressing me if there were more out there and I said yes," and his wife Huma Abedin voiced her support, "I love him. I have forgiven him. I believe in him. As we have said from the beginning, we are moving forward." But what does this mean for this campaign? We spoke to Hunter College Professor of Political Science, Kenneth Sherrill, who doesn't think this is a big issue for Weiner, "In a strange way, this becomes a problem for Eliot Spitzer."

Sherrill explained, "I think it reinforces pre-existing attitudes toward him. If you like him, it shows how aggressive and forceful he is. If you don’t like him, it shows how bad his judgment is. Everybody who's going to vote knows who he is and what he is. My standard joke is that the campaign is 'Vote For Weiner—He's Got Balls' and there are a lot of people who like that."

The latest sexting incidents, involving a 22-year-old woman and Weiner's cock-shot sending alter-ego Carlos Danger, apparently occurred last summer/fall, a year after his resignation and around the same time he and Abedin gave an interview to People touting his recovery and their strength at rebuilding their family. Sherrill doesn't think the timing of the sexting matters to voters, but it just brings up the "men are pigs" theme: "If one politician apologizes and can't keep it in a pants, why should you expect another politician to do the same?" 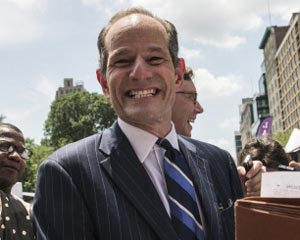 "Given the generally negative view people have towards politicians, this reinforces the notion that politicians can't be trusted, particularly on this sort of issue," Sherrill said. "It is a matter of not being trusted or being exactly what you thought they were." He also doesn't think politicians' infidelity is a big deal to New York voters: "A lot of New Yorkers liked Rudy Giuliani," whom he called a "flagrant public philanderer." Giuliani dated his future third wife Judi Nathan, even talking her to events at Gracie Mansion, while still married to second wife Donna Hanover (Nathan had her own police detail). "That went off [Giuliani] like water off a duck's back!"

As for what this means to Spitzer, Sherrill opined that now there's "a contagion of doubt" because Spitzer will be asked about his past transgressions, "It eats up the air—it's a raging fire that consumes the air that eats up the press and public's attention and you can't talk about the other things." When it comes to voting day, he believes New Yorkers can handle one cheating public officials, but "two would be a problem."