How Bushwick Fought To Rebuild Itself After The 1977 Blackout

This week, Gothamist is running excerpts from The Brooklyn Wars, a new book from journalist Neil deMause about the social, economic, and political forces that have radically reshaped Brooklyn over the past four decades. This five-part series traces the story of Bushwick from the 1970s to the present day. (Here's part one: How The 1977 Blackout Was Bushwick's Grimmest Moment.)

When the Germans and Italians who had occupied Bushwick for most of the 20th century fled redlining for the white suburban enclaves of Long Island, they were replaced were by African Americans migrating up from the segregated South, as well as new arrivals from Puerto Rico and the Dominican Republic. These were all people with fewer options of where to live—early suburbs like Levittown included lease provisions that homes would not "be used or occupied by any person other than members of the Caucasian race,’’ and within the city, white residents were known to physically attack not only black buyers but any realtors who dared sell to them. At the same time, urban renewal projects were clearing out large swaths of neighborhoods like East New York and Brownsville for new high-rise public housing—and those areas’ mostly poor, mostly black and Latino residents were arriving in Bushwick. During the single decade of the 1960s, Bushwick went from 90 percent white to 60 percent black and Latino.

Still, as local historian John Dereszewski wrote in a Bushwick history for Up From Flames, a 2007 exhibit by the Brooklyn Historical Society, this was not necessarily a recipe for decline. "Though economically somewhat poorer than the prior residents, the new Bushwickites were working-class homeowners who maintained the stability of the community by, among other things, establishing a significant number of block associations," he pointed out. Members of block associations participated in anti-crime initiatives, getting trees planted, and generally holding residents of their blocks together as the area around them descended into chaos. And they would play a key role in the recovery that would come following the devastation of the fires and blackout-spawned looting of the 1970s. 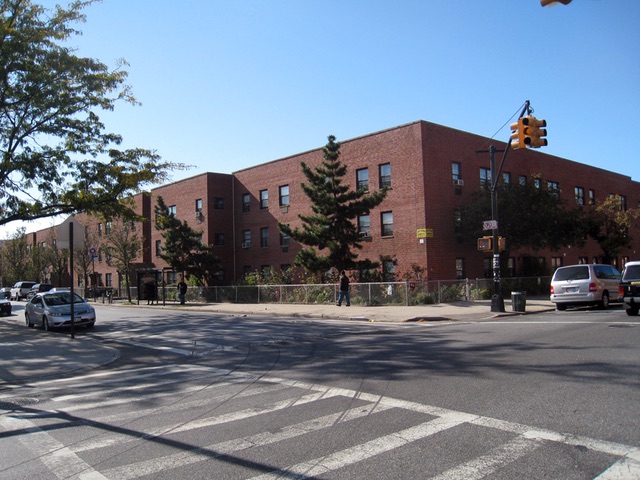 Hope Gardens, a housing development the city constructed in Bushwick in the mid-1980s. (Chris Glazier)

As soon as the post-blackout fires in Bushwick had cooled, the city moved swiftly to help the neighborhood recover. Press coverage of the looting and the arrests that followed brought citywide attention to Bushwick’s condition; a Daily News series titled, "Our Dying Neighborhoods," led the city’s five leading mayoral candidates to hold an election debate in the living room of a longtime Bushwick family. The eventual winner, Ed Koch, had made the resurrection of Bushwick from the looting and fires a key campaign promise, and soon after arriving in City Hall launched the Bushwick Action Plan, developed in collaboration with the community board to guide the neighborhood’s recovery.

This ultimately led in the 1980s to the construction of Hope Gardens, a city public housing development that filled in blocks left empty from the 1970s fires. Hope Gardens was notable for including mostly low-rise apartments, fitting the scale of the surviving two-family houses and small apartment buildings, rather than replicating the "tower in a park" model—isolated apartment towers on campuses of bland landscaping—that had made "projects" of the 1950s and ’60s a dirty word.

In all, according to Dereszewski, NYCHA built 1,076 low-income and 243 senior citizen housing units in Bushwick during first few years of the 1980s, in the last major burst of public housing built by the city. The Ridgewood Bushwick Senior Citizens Council (RBSCC), the powerful nonprofit launched by an ambitious city social worker named Vito Lopez, was well positioned to apply for the government grants that materialized in Bushwick following the blackout. RBSCC took particular advantage of the city’s Neighborhood Redevelopment Program, which starting in 1993 sold city-owned properties to nonprofits and provided low-cost financing to rehab them as affordable units; RBSCC’s 217 Wyckoff Avenue address became a common sight on signage adorning many of the "infill" construction sites that dotted the neighborhood, mostly small apartment buildings that filled in the gaps left by 1970s fires.

Community Board 4 district manager Nadine Whitted explained that developments like these helped rebind the neighborhood, not just physically but in spirit. She pointed, for example, to Bushwick Estates, a block of 49 low-slung two-family homes built in the late 1980s on George Street just off Flushing Avenue. The city chipped in about a quarter of the construction cost, plus free land; the rest was covered by the New York City Partnership, an organization of business leaders founded by David Rockefeller following the fiscal crisis to help rebuild the city and its finances. Government subsidies helped working class families afford to live in the neighborhood. A New York Times article published shortly after Bushwick Estates went up for sale described typical buyers: a young couple, one a welder, the other a nurse, who put down $13,000 in savings on a $132,000 house, renting out one of their two floors to relatives to make ends meet. 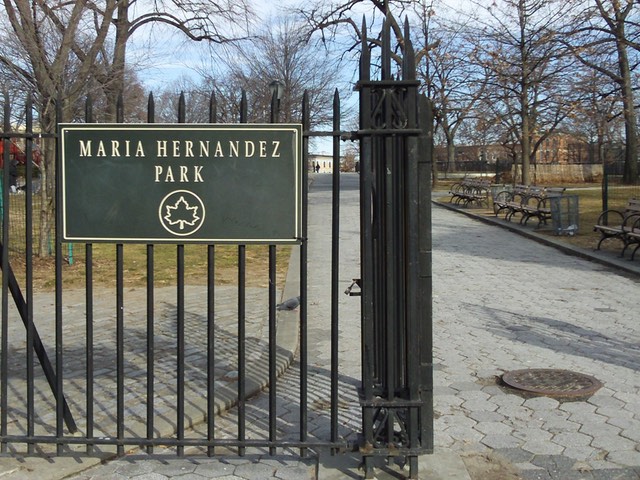 "The people who moved in that area had an oasis in the middle of World War III," recalled Whitted, who ended up renting on the block in the ’90s. "Those people bought those houses thinking that they had arrived. And they did wonderful things for the neighborhood. And that began an anchor-like effect that showed that land in and around there could be something."

Still, there were obstacles to Bushwick becoming something other than a neighborhood of last resort. In the summer of 1989, a local accountant and community activist named Maria Hernandez confronted the crack dealers who ran their trade in Bushwick Park, asking them to take their business elsewhere—and when that didn’t work, called the police on them. One morning shortly thereafter, as Hernandez stood in her bedroom blow-drying her hair, five bullets crashed through her window, killing her instantly. Later that year, the park was renamed in her honor.