How Bloomberg Fits Into a Hillary-Rudy Race 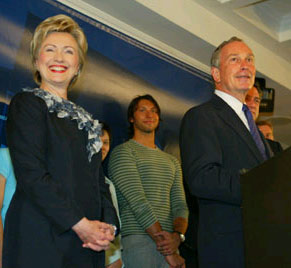 For better or worse, thanks to Mayor Bloomberg's assertion of political independence, we'll be hearing about an all-New Yorker presidential race for months to come. Last week, a Quinnipiac poll found that New York State would go to Democratic front runner Senator Hillary Clinton, over former Mayor Rudy Giuliani and Bloomberg. Clinton would get 43% of state votes, Giuliani would get 29% and Bloomberg would get 16%. If Bloomberg's not in the picture, Clinton still wins NY State, 52% to Giuliani's 37%.

And yesterday, a CNN poll reveals that Bloomberg would help shift votes to Clinton in national race between Clinton, Giuliani and Bloomberg. Without Bloomberg, Clinton and Giuliani gets 49% and 48% respectively; with Mayor Mike, Clinton gets 41%, Giuliani 28%, and Bloomberg 17%. Which seems surprising since we had suspected Bloomberg would take some Democratic votes. Then again, who knows, since a three-New Yorker race would probably be the nightmare of the country between the coasts.

The Observer's Steve Kornacki thinks that Bloomberg skeptics are doubting the Mayor's chances a little too much. And NY Sun's Ryan Sager notes that Fred Thompson has bought GoogleAds next to stories about McCain's drop in the polls (which appear next to Clinton ads). You've got to love technology.