How An Unlicensed Driver Got Away With Killing A Brooklyn Woman

On the same day that the City Council blasted the NYPD for the way it handles investigations into pedestrians and cyclists who are hit by motorists, Brooklyn resident Jacob Stevens learned that the Kings County District Attorney would not press criminal charges against the driver who killed his wife back in July. Stevens's wife Clara Heyworth, 28, was crossing Vanderbilt Avenue near DeKalb Avenue to meet him just before 2 a.m. on Sunday, July 10th. But before she made it to the sidewalk, she was run over by motorist Anthony Webb, 43, who was allegedly driving with a learner's permit that prohibited him from operating the vehicle without supervision.

An officer from the 88th Precinct smelled alcohol on Webb's breath, and administered a roadside breath test about an hour after the accident. It registered a reading of .07, and while .08 is the legal limit for a DUI in New York, the test was administered after an hour had passed. Stevens tells us the DA "could have argued he was DUI at the time of the accident."

But there was a problem: The breath test unit the 88th Precinct carries around needs to be calibrated on a regular basis to be admissible in court, and Stevens says "this one had not been calibrated for four years. They did calibrate it after the accident and found that it was in perfect working order. But a judge probably wouldn't allow it as evidence because it had not been calibrated." Webb later refused a blood alcohol test while in police custody. ("He was probably in shock when he took the roadside one, and he probably recovered his composure when he was interviewed," Stevens surmises.)

The bigger problem facing prosecutors is that the NYPD department in charge of conducting thorough investigations, the Accident Investigation Squad [AIS], did not go to the scene of the accident until at least three days later. That's because, as we learned at Wednesday's City Council hearing, the AIS only conducts investigations when the victim dies or is likely to die. Doctors believed Heyworth was brain dead "the moment her head hit the road," Stevens recalls. "They told me she was dead on Sunday afternoon. But it takes several more days to declare her dead because they have to go through a number of procedures and tests to establish that she's brain dead." As a result, the investigation was delayed. Stevens says:

AIS sent someone Sunday morning pretty soon after the accident. I don't know who they spoke with, but AIS claims they were told she was not likely to die. If they had gone back to the hospital Sunday afternoon, they would have been told she was basically dead. So they did not monitor the situation at all. So in their view it was the 88th Precinct's problem, because she was not likely to die.

As far as I know, the 88th precinct didn't return to the scene, or investigate any further. On Wednesday, an assistant DA called me and I told him Clara had died, and he then notified AIS that it was a fatal accident. I don't know exactly when AIS went to the scene, but when they did finally go there, the skid marks were gone, and when they checked the cameras, the one camera that might have caught the driver and all the impact had been wiped clean after several days. They got there too late to recover vital physical evidence. 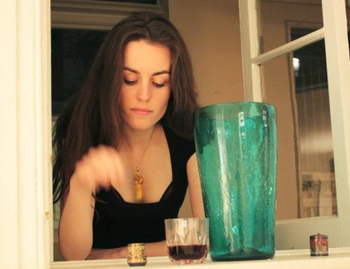 There were no witnesses to the crash other than Stevens, and because of the trauma, he has no visual memory of his wife's death. "I would have been the only witness to the crash, but I don't have a visual memory of it, just an auditory memory," Stevens explains. "My visual memory resumes when I am by her side and screaming for help. But I can't see the car or the impact. I recall the brakes screeching and it sounded like it was going too fast, but the sound of the impact wouldn't count as evidence of speeding and reckless driving."

Webb was initially charged by the Kings County District Attorney’s office on multiple counts, including sobriety violations, assault and driving without a valid license, The Local reported. But because of the lack of investigation, the DA will not take the case to trial. Webb faces traffic violations for driving without a license and driving a car that was not insured, but it's unlikely he'll do any prison time. "I don't think the judge who sits in this traffic court is going to know that anyone died at all," says Stevens. "Webb made a fatal decision to get into that car without a valid license, he had probably had at least a drink or two, and I think it's likely that he was speeding."

The assistant District Attorney who handled the case, Tom Kessler, refused to comment. But Councilmember Peter Vallone, who co-chaired Wednesday's hearing with the NYPD, tells us:

We learned a lot of things at the hearing: One is that the highway police have been decimated, down from 390 or so in 2001, to 211 now. And we learned the laws don't give the police all the tools the need. But we also learned that regardless of those two things, the police are not doing all they can right now to keep us safe from reckless drivers. They are only conducting investigations when there's a death or someone's likely to die.

I don't know the specifics of this case, but I know the DA would have a much better job prosecuting if a thorough investigation was done right away. These cases are difficult when they are brought; I don't want to argue that proving reckless endangerment is an easy task. As a former attorney in the DA's office, I can tell you it's not. But I don't think we should give up on it in every case, which is what's happening now.

"I loved Clara for who she was," Stevens concludes. "This whole thing is just sickening to me. I am horrified by how badly designed this protocol is, and that as a result people are able to get away with this." Judging by the heavy turnout at Wednesday's City Council hearing, Stevens is not alone.

#88th precinct
#AIS
#brooklyn
#Clara Heyworth
#fort greene
#jacob stevens
#nypd
Do you know the scoop? Comment below or Send us a Tip