How A Bed-Stuy Apartment Turned Into A Renter's Nightmare Involving Fraud, Eviction And A Connection To Trump

In February, David Ballinger, a 24-year-old restaurant manager, was dealing with the age-old New York renter’s struggle: after losing a roommate, he was desperate to find a new place quickly on a tight budget. Through friends, he learned about 389 Monroe, a three-story building in Bedford-Stuyvesant that had three shared apartments in total. On the third floor, one room was going for $925 a month.

For Ballinger, who had moved to the city two years ago from Idaho and knew that one-bedroom apartments routinely fetched $3,000 or more, it was a no brainer. “The rent was cheap and it was easy to get to Manhattan,” he said. “It wasn’t a super nice building but I didn’t care.

However, this being New York City, he first had to agree to use a broker. The man, who introduced himself only as Shaya, informed him about some additional up-front costs. The landlord wanted four month’s security deposit in addition to the first month’s rent. Ballinger said he negotiated over the deposit, asking that he pay only one month’s security and that the additional three months be applied toward rent for the last three months of his yearlong lease.

All told, he made out a cashier’s check for roughly $5,000 to the landlord, which was listed as CZ Properties. The amount included a broker's fee of a half month's rent.

After reading through the lease at the landlord's office in Williamsburg, he made some corrections and then signed it. He initially tried to take a photo but he said his phone died after taking only a photo of the first page.

He then asked for a copy but the broker grabbed the lease, went into an office, and never came out. Ballinger decided he would just reach him later, but his phone calls went unanswered.

Around May, he said he suspected something about the arrangement was wrong. But like many New York renters, he was thinking month to month. His hope, he said, was that he could just last through the end of his lease.

But his worst fears were realized this month, when he was served an eviction notice in what now appears to be an elaborate case of real estate fraud.

Ballinger said he showed up at Brooklyn Housing Court on Tuesday where he was informed by a clerk that the building had actually been sold in a foreclosure last summer, and that for the past six months, he had been paying rent to an entity that was not connected to the actual building owner. 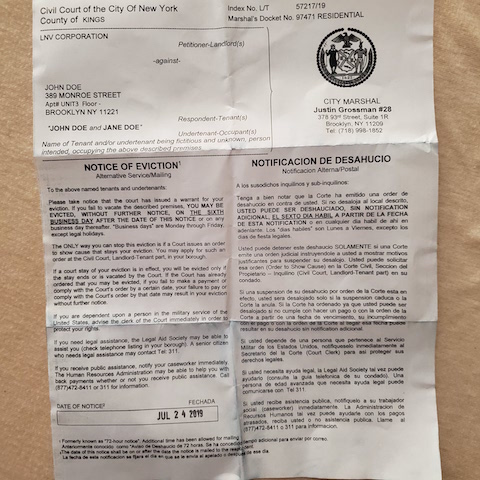 Photo of eviction notice that Ballinger received at 389 Monroe Street

In an even stranger twist, according to property records, 389 Monroe was purchased in the foreclosure sale for $2 million by a company called LNV Corp., a real estate company tied to a Texas billionaire named Andy Beal known for being a poker player and an economic advisor to President Donald Trump. In 2016, the Intercept detailed foreclosure cases where renters had accused LNV of fraud. Lawyers and spokespeople for the company denied the charges.

Ballinger said he laughed when he learned the identity of his true landlord.

“Because my tiny little apartment inside a three-story apartment building in the middle of Bed-Stuy has a distant connection to Trump,” he said.

But as far as LNV Corp. was concerned, he was a trespasser who could legally be evicted.

A message left on Tuesday at the office of Stein Weiner & Roth, the law firm representing LNV Corp., was not returned.

Told about Ballinger's story, Ed Josephson, director of litigation and housing at Legal Services NYC, said these types of fraud cases happen from time to time, mostly involving small properties. That Ballinger was given a key was unusual, he said.

But the victims generally have no recourse against eviction.

“Even if it’s not the renters fault, it doesn’t give the tenants any rights against the actual owner,” he said.

The building’s property history, involving a corporate owner swooping in, fits a common real estate pattern in New York City, according to Josephson. “There’s money to be made in flipping these houses,” he said.

According to state records on business entities, CZ Properties was created in February 2018. No officers are listed. The registered address, that of 320 Roebling Street, turns out to be a post office box location in Williamsburg. On Tuesday, no one answered the phone at the number that Ballinger said he was provided. He said the office he signed the lease at was located at 420 Broadway in Brooklyn.

Most notably, CZ Properties does not turn up in city property records for 389 Monroe. The building was originally owned by a Brenda Robinson dating back to 2006, but over the years it switched hands to an individual named Israel Silberstein whose address was listed as 199 Lee Avenue, an address famous for being the post office box address of nearly 1,000 LLCs, and later to an entity named Brenda Robinson Associates Inc.

Reached by phone, Silberstein declined to answer any questions about the prior owner or how he came to acquire the building. "I don't know who you are," he said. "I can't help you."

Robinson could not be reached for comment. A phone number listed for her on a deed was for an accounting company.

Efforts to reach someone at Prime Property Management, the company whose introduction letter to tenants had been hanging in the building, were also unsuccessful.

Ballinger said he had decided he would move out this week even though the judge had granted him a brief stay of eviction. He was worried about the possibility of somehow winding up on a tenant blacklist, even though the use of such lists by landlords was banned under the rent reform laws passed in June.

Reflecting on what had transpired, he mostly blamed himself. He should have researched the landlord and property records, he said. He also regretted making his rent payments through Venmo, a method that he thought was more convenient and safer than the web-based payment system the broker asked him to use.

But he also acknowledged that the experience was part and parcel of being a renter in New York's competitive real estate market, where there exists exorbitant rental fees and shady brokers, where a modest room in Brooklyn that rents for under $1,000 is too good to pass up, and where landlords of even small buildings can be faceless LLCs with ownership structures that are difficult to unravel.

Although he would likely never get back his security deposit, he tried to look on the bright side. "I learned a lot," he said. "Trust no one."

UPDATE: A previous version of this story had the incorrect office address for CZ Properties where Ballinger said he signed his lease. It is 420 Broadway.